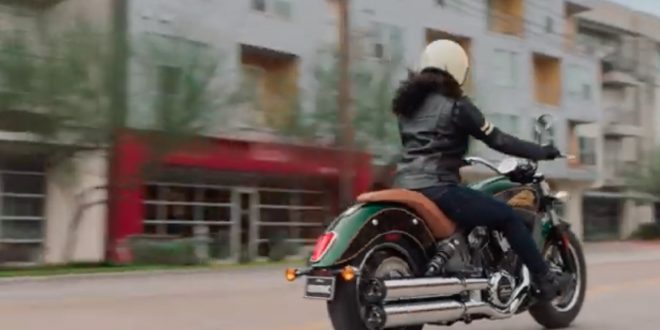 Indian Hits Back At H-D With New “Choose Wisely” Ad

Indian’s timing in debuting a new advertising campaign might not be propitious – what with the COVID-19 pandemic getting most everyone’s attention – but the company is out today with a new TV ad urging shoppers to “Choose Wisely” when buying a new motorcycle.

Not surprisingly, the 30-second spot takes swipes at rival Harley-Davidson in what can be viewed as round two of a recently initiated promotional fight.

“Bloomberg Businessweek” calls Indian’s effort “one of its most ambitious (and expensive) ad campaigns to date, splashing ‘mid-seven figures’ across a wide range of media.”

In the ad, one rider states, “I see myself as a leader, not a follower.”

Another says, “Making the default choice is never an option.”

A third rider says, “It’s easy to join the crowd, but it takes confidence to go your own way.”

A fourth concludes, “Motorcycles are meant to escape conformity, not embrace it.”

The bottom line message in the ad is that Indian owners are unique individuals, not brainless lemmings like Harley-Davidson owners.

The ad is the latest jab in a back-and-forth fight that began more than a month ago when Indian launched the “Challenger Challenge,” which is offering riders the opportunity to ride the brand’s new Challenger model back to back with a Harley-Davidson Road Glide Special.

Harley-Davidson quickly threw a counter-punch with a series of guerilla ads that asked, “Honestly now, did you spend your youth dreaming about someday owning a Polaris?” The Polaris mention refers to Indian’s parent company.

Round one ended in what appeared to be a draw. Indian has now opened round two. Here’s the ad:

“Bloomberg Business” explains Indian’s new head-to-head approach thusly: “Harley’s outsized lore, its brand swagger, it appropriation as a cultural identity by roughnecks and retired dentists alike, can be a liability as much as an asset.”

The publication also notes that Indian is stocking “at least one $21,7000 Harley at most all of its 200 North American dealerships for the moto-curious to compare and contrast.” The company believes, just as Pepsi did when it started the “Pepsi Challenge” against Coca-Cola decades ago, that its products will be preferred.

The only downside to the new “Choose Wisely” campaign is the timing. While Harley-Davidson’s sales have been sliding, COVID-19 pandemic is bound to put the skids on overall motorcycle sales.