Steve Maughmer Talks About His Bultaco

Sometimes a ride can provide a history lesson. It was shortly after going through an unlocked gate on to private property and proceeding cautiously down the

heavily-rutted, puddle-filled dirt road in Morris that I learned of the road’s past. The sloppy half-mile track, which caused my back tire to fish-tail without warning because of the mud, was actually a long-abandoned railroad bed. It was part of a 32-mile line between Hawleyville and Litchfield used by the Shepaug, Litchfield and Northern Railroad in the late 1800s.

My destination that recent Sunday afternoon was a well-concealed gravel pit. The purpose was to observe Tim Sparks and Steve Maughmer riding their vintage, Spanish-made dirt bikes, and to maybe take a ride as well. Sparks and Maughmer have known each other for decades. They rode off-road together in their youth and owned Triumph Bonnevilles when they switched to street bikes. Sparks is 52 and lives in Bantam. Maughmer is 53 and lives in Morris. Sparks went to Litchfield High School, while Maughmer attended Wamogo.

They are both members of S.M.O.G., though. S.M.O.G. is the Spanish Motorcycle Owners Group, a national club for lovers of motorcycles “Made in Spain.” Sparks owns a 1973 OSSA 250 Six Day Replica. He acquired it eight years ago from Hogan’s Cycle Shop in Agawam, MA for roughly $1,800. Maughmer purchased his 1977 Bultaco Frontera, also a 250cc bike, a few weeks ago for $2,400 from Hugh Weaver’s Bultaco shop in Craryville, NY. 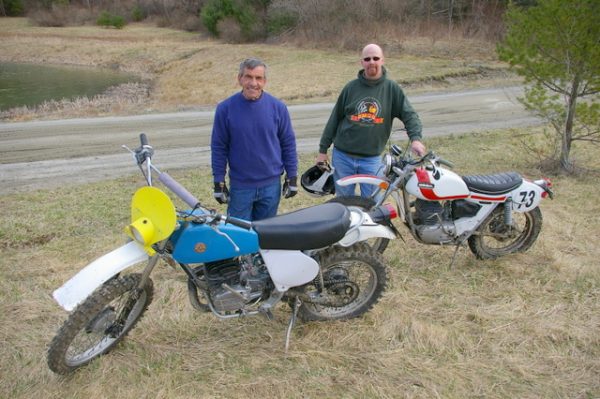 Having lathered my Japanese-made street bike in mud negotiating the road, I was surprised to find that the machines of Sparks and Maughmer were clean. They had been riding in a field, instead of the goo, and fulfilling their goals of “reliving the old days,” said Sparks.

He first owned an OSSA “SDR” back in the mid-1970s. He picked that one up for $200. “I was a teenager and rode it to death. The person who had it before me took all the lights off it. It looked like a motocross bike. I didn’t register that one,” he recalled.

His current OSSA is street legal. “It’s your basic enduro. There’s nothing fancy about it. It’s a pretty dependable bike – five-speed transmission, two-stroke, air-cooled. I haven’t had any problems with it whatsoever, just doing basic maintenance. It’s registered, so I can go from one trail to another on the roads. It’s a lot of fun on the back roads. It’ll cruise around 55, 60 miles an hour all day long. Very light, nimble, easy to handle. Plenty of power. A good every day bike,” Sparks reported.

Maughmer was likewise into Spanish bikes as a teen. He owned an OSSA and a Montesa. “I started riding when I was 10 or 11. Had mini-bikes, then got dirt bikes and continued on,” he said. He raced dirt bikes until he was 20 and raced quads until he was 30.

It wasn’t until recently that he was able to consider playing in the dirt again. “I wanted to get a dirt bike; something I could register and go over the back roads with and ride around the woods at my house,” he said. A modern bike was out of the question because they’re all tall and Maughmer isn’t. The Bultaco has a much lower seat. “It’s the only thing I can reach the ground on. I’m short,” he said.

“I wanted a Spanish bike because I had them when I was younger. They’re easy to work on. They’ve got a piston, a muffler, a carburetor, and a transmission. You don’t have all that water-cooled stuff, water pumps to worry about, radiators to worry about,” he said.

Maughmer said he enjoys the Bultaco because “you can ride one of those and putt around at idle or you can rip that thing like a motocross bike. These things are more forgiving. The weight is nowhere near as heavy (as a modern bike),” he said.

Sparks likewise likes the pep of his OSSA as well as the lasting looks. “To me, it’s a really good looking bike. The lines and paint job really appeal to me. It always stuck with me,” he said, noting that “the Spanish were very meticulous. They built them so the average person could buy one, take it the track and race it.  That’s my understanding of it, anyway. You get on it and open it up and it’s a pretty darn fast bike.”

Since getting the Bultaco and taking it on the shakedown ride that Sunday afternoon, Maughmer has done some tinkering. He’s traded out the gas tank and tidied up some of the wiring. He said his nature is that he’s “always got to mess with everything.” He even has something new to mess with – a 1965 Honda Z50 Mini Trail that someone gave him this week.

Sparks, meanwhile, has the OSSA to contend with. Between coming in his driveway after riding and opening the garage door, his rear tire went flat. It’s now off the bike and awaiting repair.

As part of the lure to get me there, Sparks had promised that I could ride the OSSA, and he was good to his word. Because the field looked uneven, I headed down the road that I’d come in on. Having never ridden a dirt bike, I found the touchy throttle to be instantly off-putting. However, I did gain sufficient speed to notice that the knobby tires were much more sure-footed than the street tires on my V-Strom.

I confess that my gingerly approach, which included avoiding puddles, resulted in the bike never getting out of first gear. That’s probably a good thing. Had I gotten the full experience, I’d likely want to buy one – just not from either Sparks or Maughmer.