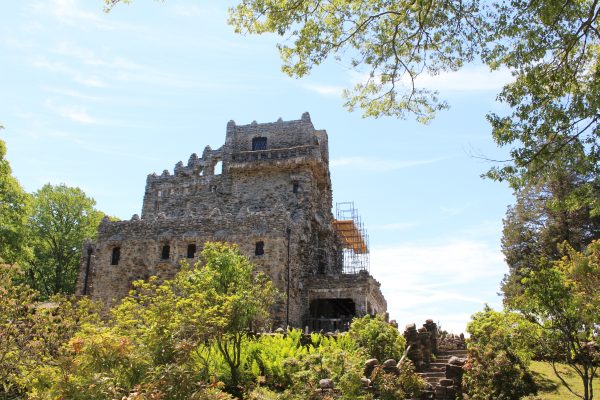 June 9, 2015 Comments Off on Neracar Shown At Gillette Castle 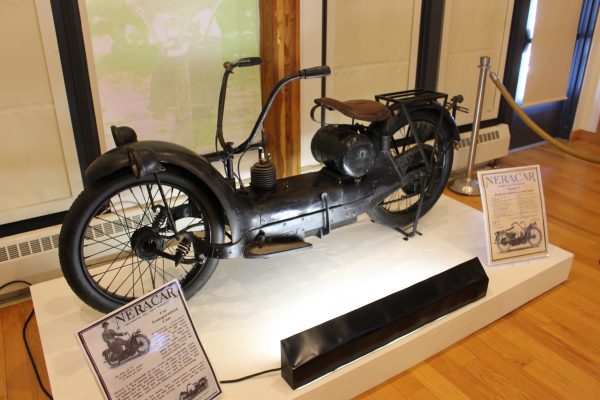 EAST HADDAM, CT – It was 5½ years ago that I wrote about David Perillo’s Neracar, and flippantly suggested that the 1922 model-year motorcycle

should perhaps be festooned with a sign saying “For Display Purposes Only” as it looked more suited for a museum than the open road.

Yes, it was running, and Perillo had put nearly 20 miles on it after rebuilding the 221cc, two-stroke motor, but the Neracar’s age, prehistoric look and original patina made it seem more of a show piece than a rider. 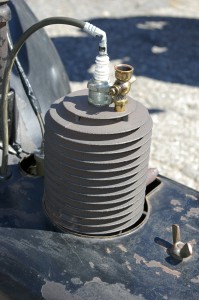 Wouldn’t you know it, the squat two-wheeler with bug-eyed headlamps is now actually bolted to a pedestal for spectators to gawk at inside the visitor’s center at Gillette Castle State Park. It’s on loan from Killingworth resident Perillo. “It’s a nice piece to have,” the park’s interim supervisor, Phil Yuris, said recently.

Yuris reported that visitors are “astonished by the condition” of the Neracar and often ask “if it’s a moped because of the shape.” With a single cylinder motor, center hub steering (as opposed to traditional forks) and expansive handlebars, it certainly doesn’t look like an average motorcycle. 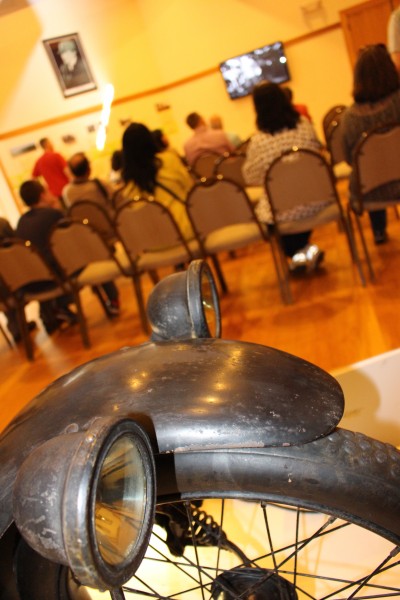 This is the third tourist season that the Neracar with the chassis number 427 has been displayed. Previously been shown in 2012 and 2013, it is regarded as the oldest, unrestored, original condition Neracar running in the world. “There are others that are as old and run but have been restored,” said Perillo.

Why is it on display at Gillette Castle State Park? Because actor, director and playwright William Gillette, who built the 24-room mansion on an 84-acre estate, was a motorcyclist who owned a Neracar himself and who rode it around the property.

It was on another motorcycle, mostly likely a Triumph, that Gillette made headlines nearly a century ago in the “Hartford Courant” when the bike’s brakes failed. He was riding down to the ferry slip below the castle and ended up riding across the dock, over the ferry and into the Connecticut River. That happened on Sept. 17, 1918 when Gillette was 65 years old. 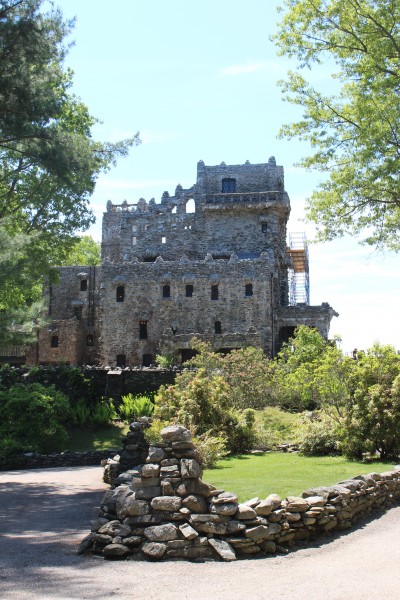 It wasn’t until the 1921 that the Neracar went into production. Created by Carl Neracher and patented in 1919, the Neracar was manufactured in Syracuse, N.Y. and in Sheffield, England. Production ended in the U.S. in 1924 and in England in 1926, with a grand total of roughly 16,500 being built. 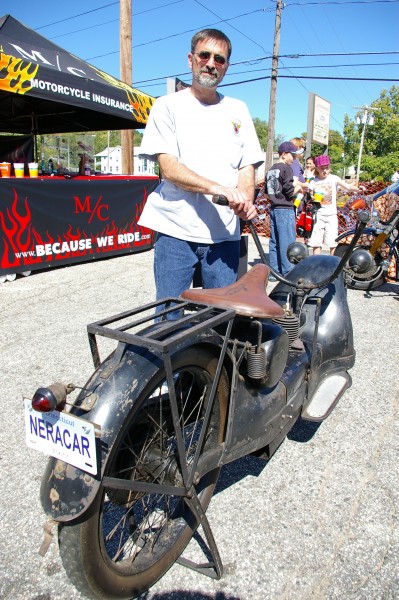 David Perillo with Neracar in 2009

Perillo first became interested in Neracars when he saw one in a museum in Springfield, Mass. in 1994. He searched for 13 years before obtaining one from a collector in Nevada. While he declines to give the purchase price, he did report that the asking price for one today ranges from $7,500 to $50,000. They are “very rare” and that he only knows of about 30 in existence.

Perillo had to overcome fears that his Neracar might be damaged or snatched before agreeing to loan it to Gillette Castle. Not only is it bolted to the pedestal, it has ropes around it and security cameras pointed in its direction. “I am proud to have it there. I think it adds to the visitor’s experience,” he said.

Yuris agreed. “Everyone is just pleased (to see it),” he said. His one wish would be to have Perillo on hand to talk about it. “I’d love to have him here every day,” he said. 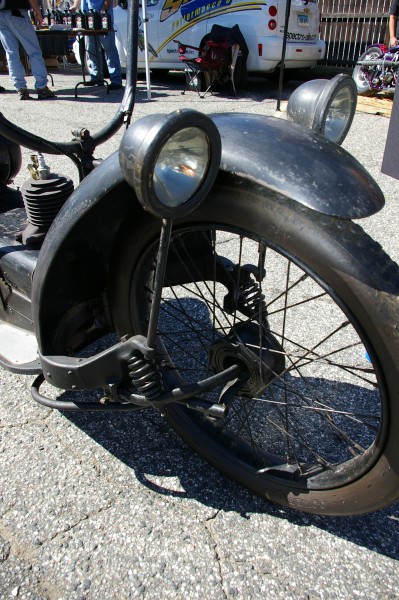 In that original column in December 2009, after having met Perillo displaying the Neracar at an open house at Doc’s Motorcycle Parts in Waterbury a few months earlier, I mentioned that Perillo was considering not starting or riding the Neracar anymore because of its age and scarcity of parts. That’s what he ended up doing, following through on a decision to “freeze it in time.”

As was the case 5½ years ago, he has no intention of selling it. However, his wife, Linda, has hinted what she might do with it should anything ever happen to him. “If I passed away, she’d bequeath it,” he said, with Gillette Castle getting it for permanent display. 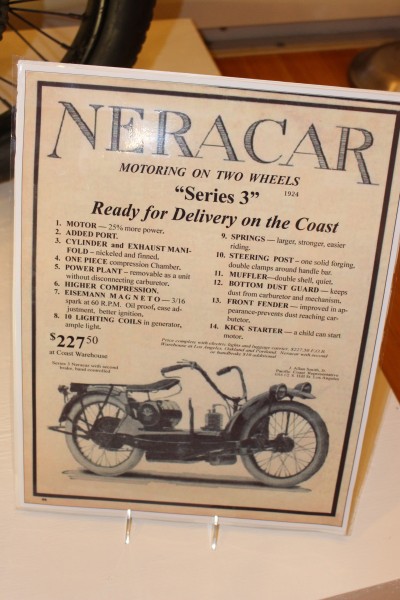 Perillo isn’t planning on checking out anytime soon, and his fondness for the Neracar prevents him from making a similar pledge. “We’ve talked about it many, many times but I’m not ready to make that commitment,” he said.

Gillette Castle is a logical place for it eventually given Gillette’s riding history, and the fact the facility caters to riders even by having designated motorcycle parking. How many other places do that? 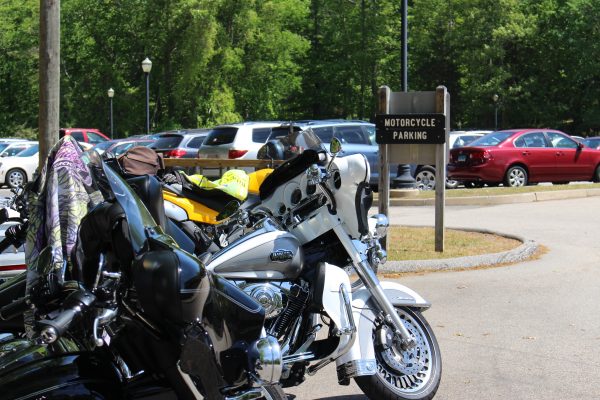 Originally published in “The Republican-American” on June 6, 2015.

Since 2010, RIDE-CT & RIDE-NewEngland has been reporting about motorcycling in New England and portions of New York.
Previous Vintage Honda Scrambler Gets Restored
Next BMW’s New Concept A Scrambler