March 31, 2013 Comments Off on Triumph’s Hurricane Always Stands Out 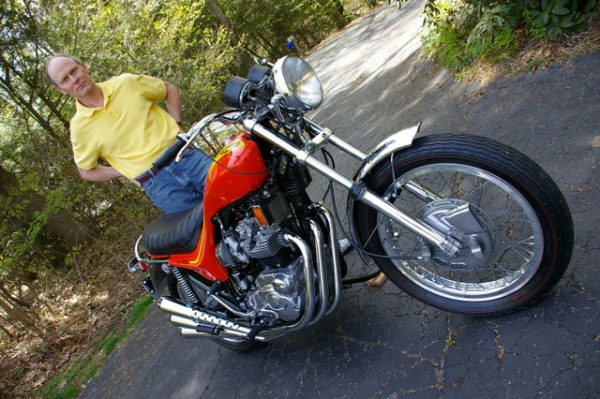 The 1973 Triumph X-75 Hurricane is unforgettable. It’s an attention-grabbing, three-cylinder motorcycle with a fan-like exhaust that is worthy of display in a museum of fine art. To hide one of these rare bikes, to have it covered and stored away in a basement spits in the face of the bike’s alluring design, its bright color

scheme and its hit-the-road attitude.

Yet that’s what Dean Mojon does with his Hurricane, at least most of the time. His is carefully concealed in the drive-in a basement of his New Hartford home, and Mojon takes the added precaution sometimes of actually sealing his classic machine in a zippered plastic bag, along with a container of a drying agent to prevent any possibility of 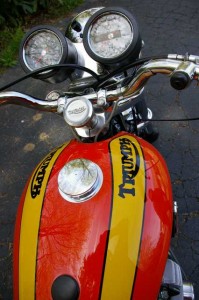 “It’s in a reasonably temperature-controlled room. It never gets hot-hot or cold-cold,” explained Mojon, noting that the temperature in his basement is usually within 10 degrees of 59. He spoke while standing in his driveway on a clear, dry afternoon several years ago after methodically unwrapping his Hurricane and rolling it outside into the spring sunshine.

A few yards away on the road, riders periodically rumbled past aboard traditional, cookie-cutter, modern-day cruisers – every one of them oblivious to the fact that a jaw-dropping sight was resting on its kickstand within eyesight had they glanced through the gap in the rhododendrons.

Mojon bought the Hurricane in 1974 for $1,600. It hadn’t seen a road in 20 years and only had 2,165 miles on its odometer. At the time of the interview, he preferred to ride two other bikes in his subterranean collection, a green 1971 BSA Thunderbolt 650 and an orange 2000 Triumph Sprint RS. He also owned a yellow 1971 Norton 750 Commando. (The Sprint RS and the Commando are still in his collection today, supplemented now by a recently-acquired 2013 Triumph Thruxton.) 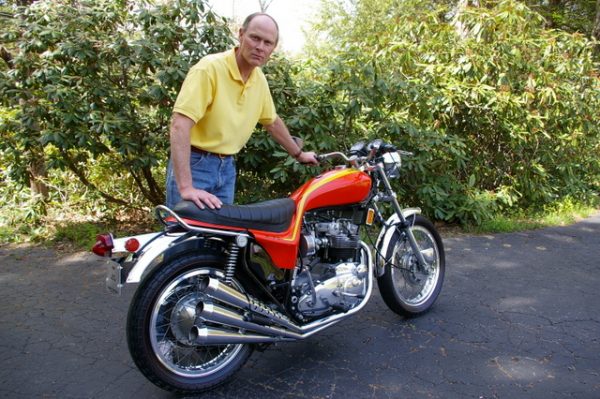 Both primitive by today’s technological standards and visionary, the British-built Hurricane was designed by an American, Craig Vetter. Fewer than 1,200 were ever produced, beginning on the fall of 1972, and all are considered 1973 models. Mojon’s bears the stamp NH00116 and the crankcase is etched with the letters “BSA.”

Those initials stand for Birmingham Small Arms, the company that once made both BSAs and Triumphs. In the ‘50s, the company was the largest producer of motorcycles in the world, but competition from Japan and Germany in the ‘60s had BSA facing bankruptcy by the early ‘70s.

In Mojon’s mind, the reason for the disappearance of the BSA brand by 1973 and Triumph’s limping status until John Bloor bought the nameplate in 1983 was due to the fact “a tremendous company became managed by people who had no motorcycle experience.”

Secretly charged to come up with something special for BSA was the then-27-year-old Vetter, a designer whose own company specialized in motorcycle fairings. He was hired in 1969 by BSA’s stateside manager, Don Brown, to “Americanize” the company’s Rocket 3 model. Management back in England wasn’t informed and the bike was funded from petty cash. 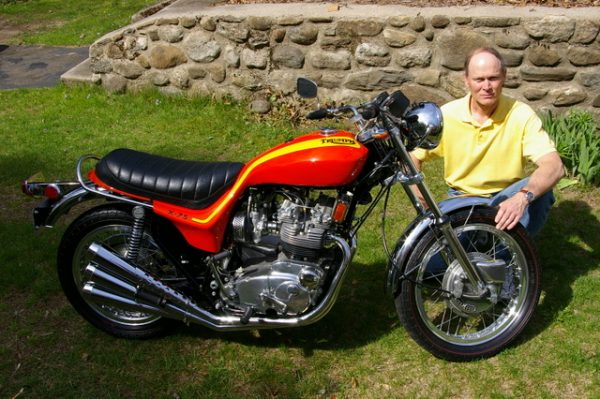 The ultimate result of the stealth project was branded a Triumph, although Mojon’s Hurricane originally had bolt covers for the shock absorbers that had the BSA logo on the left side and the Triumph emblem on the right when he bought it.  (Unfortunately, last summer, he lost the BSA medallion.)

Nearly 45 years after “Cycle World” magazine gave the world the first look at the prototype bike with a tantalizing September 1970 cover display that teased “IS THIS THE NEXT BSA THREE?” (and four decades years after the bike’s launch), Vetter still gets satisfaction from having designed a truly memorable motorcycle.

“All the parts are correct on the thing,” he said matter-of-factly when reached at his home in Carmel, Calif. What he likes most about the Hurricane is “just the overall package,” which he termed “very handsome.”

With so few Hurricanes in existence worldwide, the chance of actually seeing a Hurricane out on a state highway are probably less than it is for us to get slammed by a real hurricane.

A museum, such as the Motorcycle Hall of Fame in Pickerington, Ohio, is a more likely place to see a Hurricane. More than a decade ago, New York’s Guggenheim Museum even included a Hurricane in a motorcycle exhibition, along with a BSA Rocket 3. The purpose, said Vetter, was to fully demonstrate the “difference between corporate design and one personal artist’s design.”

Both Triumph owners and the company itself appreciate Vetter’s contribution to the company’s rich history. He recalled attending a 30th anniversary celebration of the Hurricane in England. “They actually assigned a bodyguard to me,” he said.

Despite the bike’s now revered and collectable status – a flawless example can fetch as much as $30,000 today – Vetter still doesn’t like one part of his design, the much-photographed triple exhaust. “I could not stand the fanned out exhaust pipes. I tried every combination that I could. I was never really happy with it,” he said. 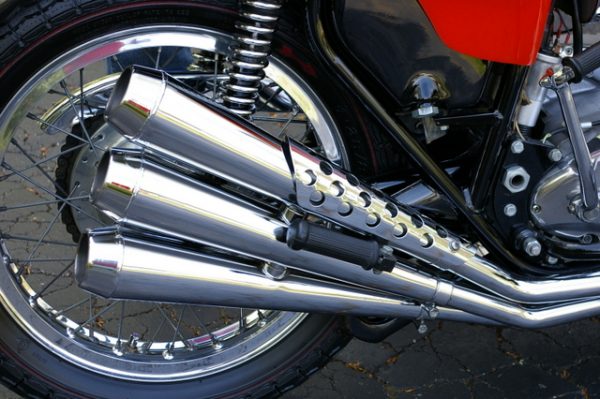 How does the Hurricane ride? Mojon reports, “It’s kinda choppy, kinda stiff,” he said.     But sitting in the sun, its nearly day-glow paint seemingly relishing the rare outdoor exposure, Mojon’s pristine Hurricane looked ready to howl like a, well, hurricane.

Mojon summed up his Hurricane with the same reaction of almost anyone who sees one: “It looks pretty hot.”