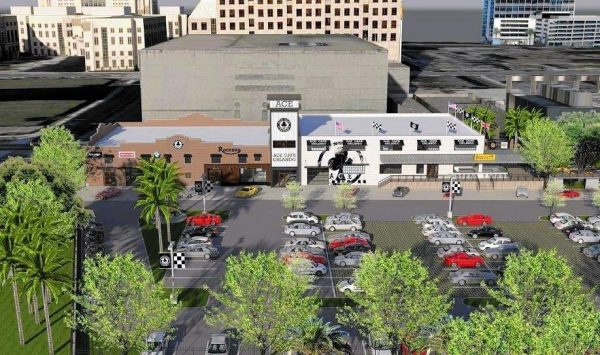 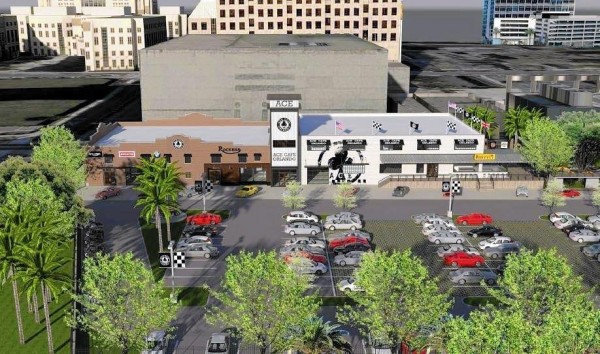 The idea has been floating around for years – a spinoff of London’s Ace Cafe in the U.S.

A story on the website Bike EXIF in 2011 proclaimed “the legendary British Ace Cafe is setting up shop next year in the USA. Ten new outlets are planned, and arrangements for the first one are close to being finalized.” That proved inaccurate – or at least premature – as none materialized.

The “Orlando Business Journal” raised the prospect again on Dec. 10, 2013 when it reported that city officials in Orlando, FL had confirmed a lease had been signed for a downtown location. A follow-up story three days later pegged the location as “the corner of Livingston Street and Garland Avenue” and said the cafe could open by late 2014.

It wasn’t until last week, though, that actual details became available when the owners of the North American rights to the Ace Cafe name announced the signing of a long-term lease and released an artist’s rendering (shown above) of the operation that will sit on a three-acre site and with a building of more than 16,000 square feet.

Mark McKee, CEO of Ace Cafe North America, was quoted in the “Orlando Sentinel” as saying that “it will be an iconic, symbolic destination.” The story revealed that the lease negotiation took 18 months. The Ace Cafe in Orlando will be the third, joining the one in London and a copycat cafe in Beijing.

The original Ace cafe operated in London from 1938 through 1969. For British motorcyclists in the 1950s and 1960s, the Ace Cafe “became the place to meet, have a meal or cup of tea, arrange runs (often to other cafes or the coast) or simply to mend your bike,” according to the Ace Cafe website. Motorcyle exhaust fumes mixed with rock ‘n’ roll, and the cafe even had a starring role in the 1963 movie “The Leather Boys.”

In 1993, Mark Wilsmore had the idea of staging a annual reunion to mark the cafe’s closure, which was partly a consequence of the faltering British motorcycle industry. The first one was staged on Sept. 4, 1994 on the site of the former cafe and marked the 25th anniversary of its closure. Three years later, the cafe re-opened on a part-time basis. It wasn’t until September 2001, after extensive remodeling, that the Ace Cafe returned on a full-time basis.

Here’s a 3D rendering of what the Ace Cafe Orlando will look like:

Since 2010, RIDE-CT & RIDE-NewEngland has been reporting about motorcycling in New England and portions of New York.
Previous A Forum Worth Checking
Next Good Photos Crucial To Selling A Bike