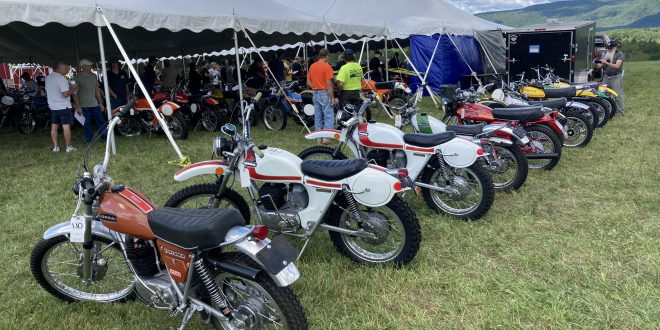 Auction of Vintage Trail Bikes Draws A Crowd Of Bidders

CHESHIRE, MA – Jim Hoellerich got his wish Saturday with the auctioning off of the contents of his private Museum of Vintage Trail Bikes. The auction by J. Wood & Co. was staged under a large canopy in the field beside the barn on the family farm.

More than 500 registered bidders – both on site and online – paid well more than $500,000 alone for the roughly 150 old bikes made by OSSA, Bultaco, Penton and more. Most brought in the $2,000 to $5,000 range. Models and memorabilia bearing the Yankee name did even better.

Hoellerich passed away May 22 at age 88, leaving behind the hilltop museum dedicated to dirt bikes that he operated for more than 30 years. It was filled not only with motorcycles, but signage, riding gear, parts and memorabilia. His wish was that it would be passed on to others.

“I think it’s the right thing to do,” said his nephew, Roger Hoellerich, who attended the auction. ”Who’s going to take care of these hundreds of motorcycles? It’s sad to see this go, but what are you going to do with (the collection)?”

Yankee’s popularity can be traced to the rarity of the marque. Founded by John Taylor of Schenectady, NY, the American-made brand had only a brief existence in the early 1970s.

Moroz said his plan is to store the bike and only bring it out to display at vintage events.

Rick Sanderson also bought an OSSA model after coming to the auction from Idaho, although he grew up nearby in Adams, MA. He acquired a 1981 OSSA Yellow Gripper 350 Trial model for $4,200.

“I was going to get a bike no matter what,” Sanderson said. As for his OSSA, he added, “That thing looks brand new.”

The auction had something for everyone and some unexpected items. It was no surprise, perhaps, that a Penton-logoed helmet signed by company founder John Penton would go for $450 but seeing a rebuilt 1948 Indian Chief engine being offered was a surprise. It sold for $3,900.

J. Wood & Co.’s website displays every item that sold in the auction and found a new home. The auction took hours. Two hours after the 9 a.m. start time only 20 percent of what was being offered was sold.

Hello! If you enjoyed this story, please share it with other motorcyclists by clicking on the social media buttons below.

Bud Wilkinson writes the "RIDE-CT" motorcycle column and the "My Ride" classic car feature in the "Republican-American" newspaper in Waterbury, CT. A graduate of Vermont Academy, he received a B.A. degree journalism from Ohio Wesleyan University in 1975. He is the recipient of a Scripps Howard Foundation National Journalism Award in 1992 and a 1991-92 regional Emmy Award for commentary. He currently rides a 1987 BMW R 80 RT and a 2014 Triumph Bonneville and drives a 2010 Mazda MX-5 Miata and 2008 Ford Ranger pickup.
@https://twitter.com/ridect
Previous Promising Start To Yankee Chapter’s National Meet
Next Auto-Red-Bug At Yankee Chapter Show Fits In Among Old Motorcycles