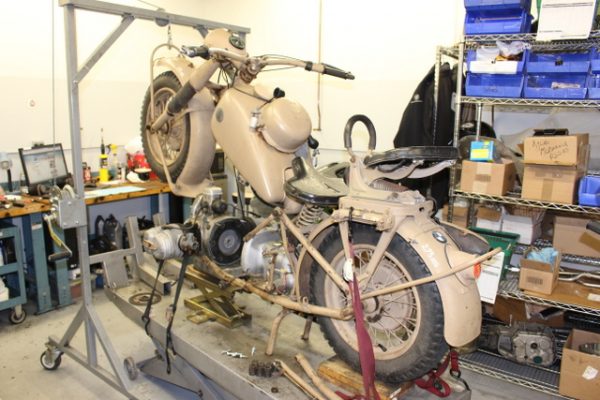 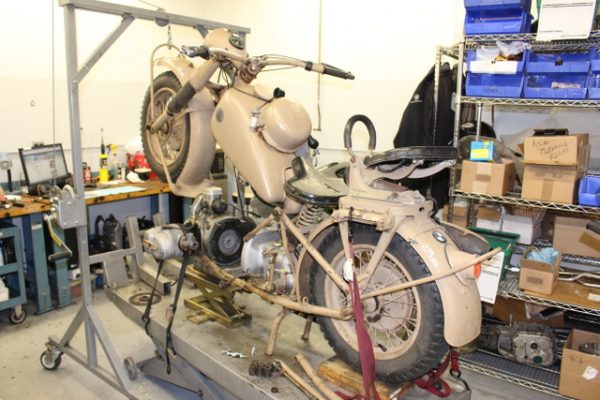 for 45 years and is revered among Beemer owners in Connecticut and beyond for his expertise. Over that long span, he’s only worked on two R75M models. The first time was in 1975. The second time was – or is – right now.

“They’re out there, but they’re rare,” said Cheney of the R75M. He’d invited RIDE-CT/ RIDE-NewEngland into the dealership’s service area one afternoon earlier this month to see a 1942 model. Painted Sahara tan and looking intimidating, despite being incapacitated, the bike was chained and strapped to a motorcycle lift. Nearby was a sidecar that goes with it.

Its model year provided a clue as to its past and purpose. So did white lettering stenciled on body parts as well the “M” in its model name. The bike being worked on was built as a military motorcycle, and it presumably saw action in World War II. 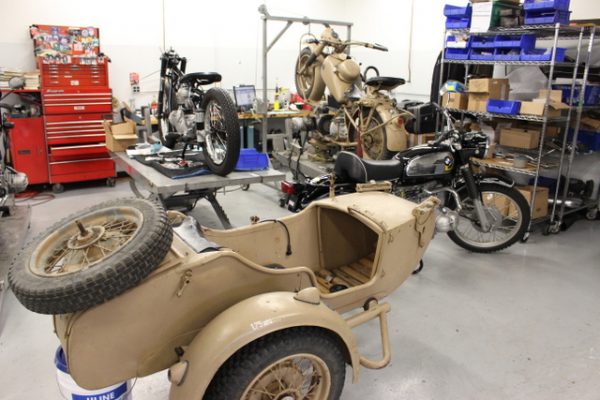 The specific build date was Christmas Eve – Dec. 24, 1942 – and it was “immediately, that day, shipped to Halle Air Force Base for procurement,” said Cheney. Where it went after that isn’t known, although Cheney suspects North Africa as motorcycle battalions were routinely used for reconnaissance. “It’s the most logical place. These were the spearhead of the panzer divisions,” he said.

BMW began developing the 750cc R75 in 1938 at the request of the Werhmacht. Actual production of the 26-horsepower model began in 1941 in Munich. A year 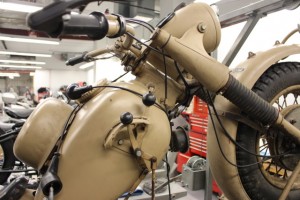 later, when the Munich plant shifted to the exclusive production of aircraft engines, R75M production moved to Eisenach but ceased in 1944 after Allied bombing badly damaged the factory.

Only roughly 16,500 of the R75M models were ever built, Cheney said, and there’s no sure count of how many exist today. “A lot of them were abandoned on the battlefield. It happened in Russia, it happened in Poland and it happened in North Africa. It also happened during the Battle of the Bulge,” said Cheney, describing the motorized discards as “war litter – for lack of a better term.”

The bike in the Max BMW shop belongs to a Greenwich resident, who bought it at auction back in the summer. Citing privacy, Cheney declined to give the owner’s name but reported “the customer burned the clutch out trying to put it on a trailer.” That’s why it’s at Max BMW for a late fall/winter fix.
“We’re waiting for a few parts now,” said Cheney. “You can get the parts but you’ve got to wait for them to ship to you. Most of them are in Europe. People over there aren’t in a hurry.” 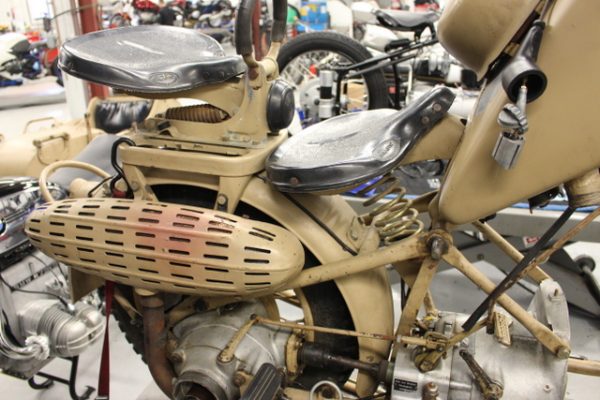 An inspection of the partially disassembled R75M revealed features not found on other bikes, especially modern ones. For instance, there’s a high-swept exhaust and there appears to be small German army helmet fitted atop the gas tank. Cheney explained that the bike is “made to go underwater. The air intake is sealed and the air box is on top of the fuel tank. The magneto and generator housings are all sealed with O rings.” That makes it possible for the motorcycle to ford streams and rivers. 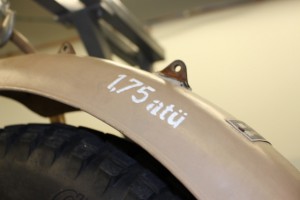 The R75M also has an eight-speed transmission; four low gears and four high. It also has two-speed reverse; low and high. While this bike lacks swastikas or any other military emblem to suggest its origin, it does have other markings. White lettering on the front fender provides recommended tire pressure. A small metal panel designed as a knee guard has other info on the “vergasser.” That’s German for carburetor and the panel lists the settings for the carburetor jets should work need to be done in the field. “It’s like a rolling workshop manual,” Cheney said. 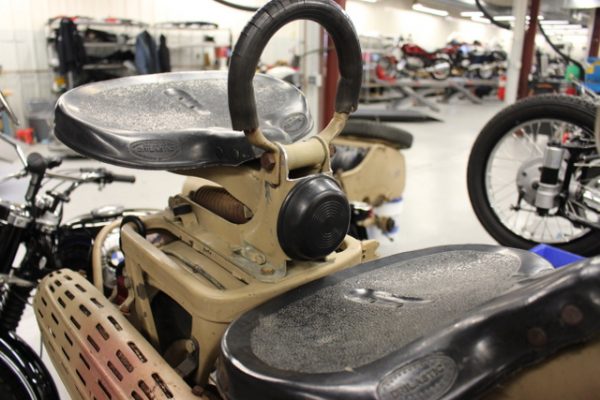 Separating the sprung front seat from the rear passenger seat is a grab handle. There’s also a round spine pad in back of the driver’s seat for lower-back protection.

Cheney believes the bike has its original paint. He pointed to a metal informational plaque riveted to the rear of the sidecar. It would have been difficult to remove the plate without damaging it if the bike was repainted, and there’s no sign that anyone painted around it. Besides tan, the R75M also was produced in gray for use on the Eastern Front and in camouflage.

A little more than a week ago, the R75M’s owner showed up at Max BMW with some of accessories for the sidecar – aluminum water cans, saddle bags and a Mauser MG34, an air-cooled machine gun which Cheney said was capable of firing 1,200 rounds per minute.

Over the years, Cheney has seen countless vintage BMWs come through the service departments where he’s worked and views the R75M as special. “I work on cool stuff all day long. It ranks up there,” he said.

The only frustration in a case like this – for him, for the owner, and for any else who ever gets to see it – is not knowing more about the bike’s history. Said Cheney, “I often say, ‘If these bikes could talk…’” 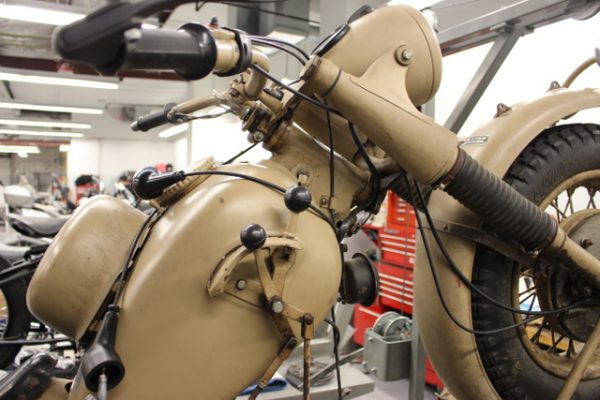 Since 2010, RIDE-CT & RIDE-NewEngland has been reporting about motorcycling in New England and portions of New York.
Previous No Change in Slingshot Status In CT – Yet
Next Honda Produces 300 Millionth Motorcycle