Bookshelf: “Conversations with a Motorcycle”

April 6, 2013 Comments Off on Bookshelf: “Conversations with a Motorcycle”

As an avid reader, I sometimes wish that I kept a yellow felt-tipped pen on the nightstand beside my bed.  That way I could highlight catchy phrases and

memorable passages in the books that I read. This would make it easy to locate them at a later time because you never know when
you might need to recall the military strategy of Dwight D. Eisenhower, the wit of James Thurber or the substance-fueled acidity of Hunter S. Thompson.

The book that I finished early yesterday morning – “Conversations with a Motorcycle” by Jack Riepe – would have presented a problem, though, because the pages would have ended up more lemony than white and would probably have fused together. It’s cleverly written and painful to read – painful only in the sense that an adult man remembering embarrassing and painful moments from his own youth can see where Riepe’s headed in certain situations and knows it won’t turn out well. Been there, done that, and not sure that being reminded is a pleasurable thing. 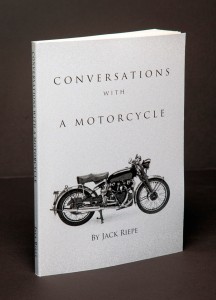 terms, the book’s a Baby Boomer’s recollections of his first motorcycle, in this case a 1975 Kawasaki  H2, which was then the fastest 750cc machine on the planet. More complex subplots include his need for peer acceptance, the loss of his virginity, his first broken heart, his subsequent horizontal encounters with the opposite sex and the constant feedback from his bike.

As a 20-year-old, Riepe was probably like most 20-year-olds; brash on the outside and nervous within. He liked to ride fast, drink hard, and have a babe on the back of his bike, even if he was probably more adept at manipulating a clutch than a bra fastener. What guy wasn’t at that age, although bras weren’t always worn back then. But that’s getting ahead of the story.

I discovered “Conversations with a Motorcycle” by accident earlier this year, the same way I took up riding. Another website, For Love of a Motorcycle, reviewed it back in January and I stumbled across the review. I quickly tracked down Riepe and tried to scrounge a review (otherwise known as “free”) copy. We ended up chatting and he told me about his motorcycle blog, Twisted Roads, which he described as “barbed wire and broken glass” in which about “98 percent” of what is written is true. 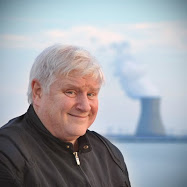 Riepe also mentioned how he had a 35-year career in public relations. “I became a professional flack as the only other job in town – piano player in a whore house – was taken,” he said. I have no idea whether he can actually play a piano or, given the picture he supplied, know how to run a nuclear reactor. I do know the guy can write with humor, and he’s reserved some of the best lines for the H2.

What? You say your motorcycle doesn’t converse with you? Sure, it does. Remember your last close call and the words screaming in your head, “Damn, you were lucky.” That’s wasn’t your mind talking, rather your motorcycle expressing gratitude for the escape and exasperation for being put in harm’s way. Think about it for a second and you’ll agree that all bikes talk.

In “Conversations with a Motorcycle,” Riepe takes readers along for his life ride, insecurities and all. Of the H2, he writes, “The bike was a miserable failure in its role as a prop to jump-start a career of sexual exploration. I thought having a motorcycle would make me cool and somewhat exotic to the women in a local bar. I was going to be ‘the sensitive writer/poet, who rode a screaming Japanese street bike.’ Instead I was the ‘dweeb’ who rode a lime-green, odd-sounding, smoke-generating two-stroke motorcycle. Not only did the bike fail to compensate for my peculiar dweebiness, it emphasized it.”

(How I found that passage without it being highlighted is a mystery.)

Biker bars, lakeside picnics, sexual conquests and two-wheeled adventures are all included in “Conversations with a Motorcycle.” There are many moments that make a grown man cringe, but many more that will make him smile and yearn to be young again, but with the wisdom of age intact.

“Conversations with a Motorcycle” may be purchased by emailing Riepe at jack.riepe@gmail.com.  Sorry, but since I didn’t pay for my copy, I have no idea what it costs but it’s worth it no matter what the price (within reason). I just wish I’d highlighted my copy when reading it.

Since 2010, RIDE-CT & RIDE-NewEngland has been reporting about motorcycling in New England and portions of New York.
Previous Spring’s Arrival Means Start of Rider Courses
Next Vintage Yamaha RZ350 Gets Better With Age