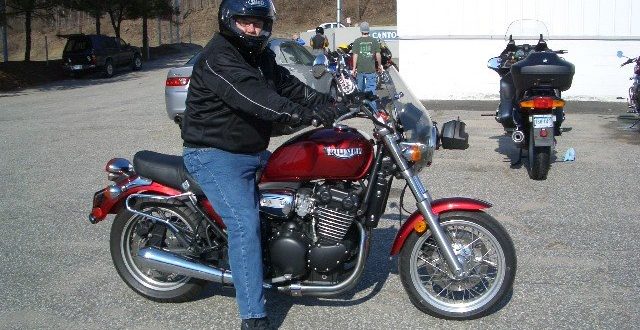 My first motorcycle - a 1999 Triumph Legend

HARWINTON, CT – There comes a time of reflection when one reaches and passes the age where the hair turns gray. For some folks, realizing that time on earth is fast running out, that provides an incentive to compile a “bucket list” of goals yet to accomplish; of places to

visit; and of daring deeds to attempt.

While my beard may be white, I have no such list, but only because my 42-year career as a newspaper, TV and radio reporter has been so chocked full of memorable experiences that I’m flummoxed as to what’s left to try or enjoy.

For instance, over the years, I’ve…

Owned numerous motorcycles – almost too many to count – and have been frightened several times while riding them.

Interviewed crew members from the World War II bomber “Memphis Belle.” (Wish I had asked better questions. Was a bit in awe.)

Touched the Stanley Cup. (It was during a Roadrunners’ telecast, during which I also interviewed Montreal Canadiens’ legends Henri Richard and Yvon Cournoyer.)

Visited 14 countries. (And met nice people in every one of them.)

Birdied the 18th hole on the famed Old Course at St. Andrews in Scotland by sinking a 45-foot putt. (The small gallery clapped.)

Made a bundle at a casino – or least enough to cover the cost of the vacation – in Garmisch-Partenkirchen, Germany. (Just lucky at roulette. Celebrated by going to McDonald’s for a late-night snack and a beer. Yes, Mickey D’s sells beer in Germany.)

Raced an elephant and ridden a camel. (Elephants smell.)

Sat and chatted with humorist Erma Bombeck in her kitchen.

Skied in deep powder at Arizona Snow Bowl after a storm.

Ridden in a helicopter. (Quite a few times working for Channel 10 in Phoenix.)

Covered the Grammy Awards on the red carpet at the Shrine Auditorium in Los Angeles. (A night that I’d like to forget.)

Calf roped in a professional rodeo. (Calf almost clobbered me in the cranium when I lost my footing when trying to tie it.)

Attended a party at Larry Hagman’s beachfront home in Malibu, along with the cast of “Dallas,” during the summer when everyone was asking “Who shot J.R.?” (Hagman’s mother, Mary Martin, was the greeter.)

Chatted with Sean Connery in a “subway tunnel” on the Hollywood set of the motion picture “Meteor.” (He was supremely disinterested and can’t say that I blamed him considering how bad the movie turned out.)

Attended more concerts than I can remember, among them: The Rolling Stones, Fleetwood Mac and ELO, all at Cleveland’s Municipal Stadium; U2 at Denver’s Mile High Stadium; The Rolling Stones and U2 at Sun Devil Stadium in Tempe, AZ; and Ray Charles on a pier in Seattle.

Been in the Yankees’ clubhouse before a game at the old Yankee Stadium. (Reggie Jackson said “Hi” as we passed in the tunnel to the field.)

Golfed in Scotland, Ireland, England and Portugal. (Irish courses are the best.)

Served as chauffeur for comedian Andy Kaufman. (He was up for a role in the sitcom “Taxi” but didn’t want to talk about it.)

Lunched with cast members of “Star Trek: The Next Generation.”

Had dinner with Michael Landon and Merlin Olsen.

Been verbally abused by Howard Cosell at an NFL owners’ meeting. (Humiliating.)

Seen games at some great old ballparks that no longer exist – Comiskey Park in Chicago, Tiger Stadium in Detroit, County Stadium in Milwaukee, Riverfront Stadium in Cincinnati (not so great, really), Municipal Stadium in Cleveland, and the old Yankee Stadium.

Gazed at starfish in the water at Orcas Island in Washington.

Driven a Dodge Viper more than 100 mph at the Chrysler test track outside Phoenix.

Golfed at some great courses in the U.S. – Firestone Country Club and Muirfield Village Golf Club in Ohio, Torrey Pines in California, Pinehurst in North Carolina, TPC Scottsdale in Arizona, and TPC River Highlands in Connecticut.

Shivered at an Ohio State-Michagan football game at Ohio Stadium in Columbus.

Enjoyed theatre in London’s West End, including seeing Rex Harrison and Claudette Colbert in “Aren’t We All” at the Theatre Royal Haymarket (which dates back to 1720).

Had a minor car accident in Paris.

Attended closing night cast party of “Beauty and the Beast” on Broadway.

Had dinner with Wolfman Jack. (He convinced me to try rabbit marinara.)

Interviewed Michael Jordan, but not about basketball, rather his role in the movie “Space Jam.”

Interviewed Billy Martin at a stadium in Columbus, Ohio, but not about the New York Yankees, rather about the title character in the made-for-TV movie “One in a Million: The Ron LeFlore Story.” (Martin had managed in Detroit.)

Stood next to Rosa Parks and Stevie Wonder backstage at a Martin Luther King Jr. Day celebration in Phoenix. (Would have liked to have talked with Rosa Parks but didn’t want to disturb her.)

Driven the Ring of Kerry in Ireland.

Was an extra in the movie flop “O.C. and Stiggs,” directed by Robert Altman.

Been transported through time. (OK, it just seemed that way when I interviewed actor Jeremy Brett by phone. He slipped into character as Sherlock Holmes and did a page or so of dialogue. It was as if time had shifted back to the late 19th century.)

Went to prep school with Joe Perry of Aerosmith.

Been recognized and greeted by a member of the Harlem Globetrotters. (During my TV days in Phoenix.)

Had pizza alongside Loch Ness. (Desperately needed it to help clear a hangover.)

Attended NHL games at the old Madison Square Garden in New York as well as the current one, the old Olympia in Detroit, the Forum in Los Angeles, the Civic Arena (aka The Igloo) in Pittsburgh, and Richfield Coliseum in Ohio where the short-lived Cleveland Barons played in the late 1970s.

Attended the Rose Bowl in Pasadena, CA in 1980 (Ohio State versus USC) and numerous Fiesta Bowls in Phoenix.

Gone deep-sea fishing off the Oregon coast as well as off the coast of The Algarve in Portugal. (The excursion in Portugal was memorable as the girl friend of another angler on the boat went topless the entire time.)

Had Charles Barkley come up to my table to say “Hi” when out dining with friends one night in Phoenix. (Needless to say, I’m a big Barkley fan.)

Had actress Jamie Lee Curtis sit on my lap during a train trip from San Diego to Los Angeles.

Gone on a “double date” with Miss Universe. A friend in Los Angles was dating the reigning Miss Universe at the time.

Played catch at the “Field of Dreams” in Iowa.

So, see my problem? What’s left to do? Maybe visit New Zealand. Or witness the Isle of Man TT. I have been very fortunate to have some amazing experiences thanks to my career. If I hadn’t been there, I wouldn’t believe it.

Since 2010, RIDE-CT & RIDE-NewEngland has been reporting about motorcycling in New England and portions of New York.
Previous Harley-Davidson Sales Dip In U.S.
Next Always Riding: Bike Shop Muscles Into Granby, CT