It doesn’t take a math whiz to decipher the meaning behind the “2X4ON3” message on the New York license plate that’s mounted on the rear of Ken and Peg Acker’s bright red trike. 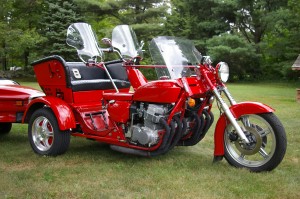 It refers to the two four-cylinder engines that power the homemade three-wheeler. RIDE-CT spotted the custom rig one recent evening parked outside of AJ’s Steak & Pizza in Goshen. Passers-by going in and out of the restaurant were giddily taking pictures of it with their smart phones, which made the instinct to go downstairs into the restaurant and locate the owner an easy one to follow.

“Everybody notices us. The best part of it all is watching the smiles on people’s faces,” Peg said later. That is, except when they’re riding the trike on an Interstate highway. “I’ve had people go into the breakdown lane and come up next to me to take pictures – going 70 miles per hour. It gets scary sometimes,” said Ken. 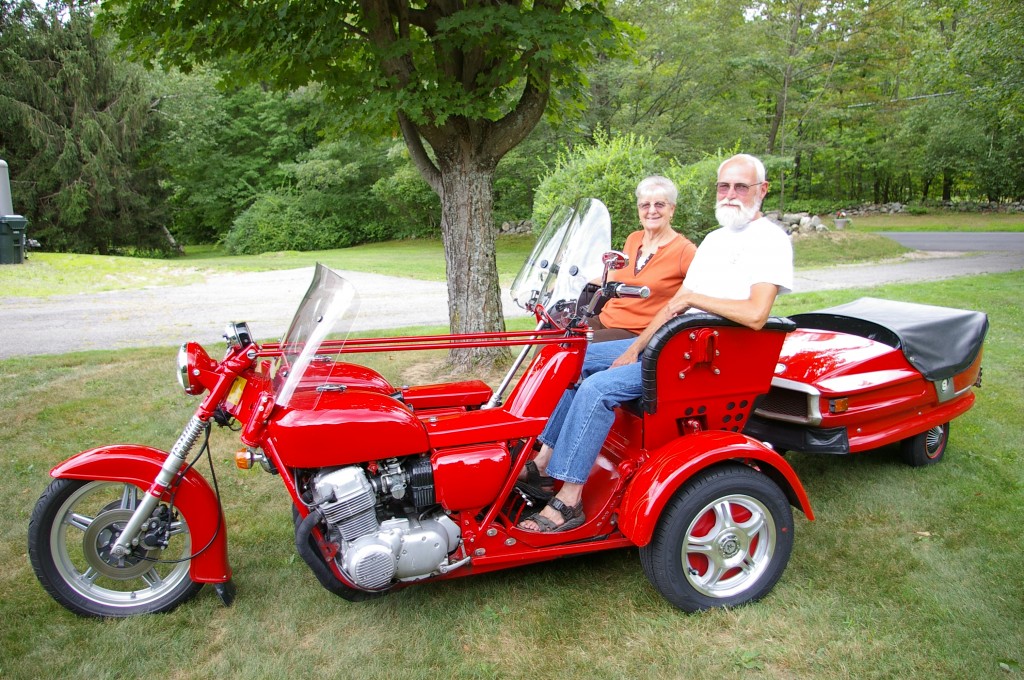 It was a few days later and the Ackers were visiting relatives in Harwinton, which made getting together convenient. Ken was born and raised in Terryville, lived in Watertown for 20 years and Harwinton for 10 years. He retired from New Departure in 1992 and moved to Walton, N.Y. near Oneonta. He got the idea for the trike in 2000 and it took six years to get it on the road.

“I built it from scratch. I put the two motors and frame on the floor and started from there,” he recalled. The four-cylinder motors came from 1975 Honda CB750s. They put out 62 horsepower each, giving the eight-cylinder trike 124 horsepower. “It runs pretty smooth at 70 on the highway. I had it to 95 a couple of times and it’s a handful. It starts floating around,” he said.

The trike is truly a “bitsa” machine. The forks came from a 1978 Honda Gold Wing, while the rear end was supplied by a 1990 Subaru Justy car. When riding in it, the Ackers park 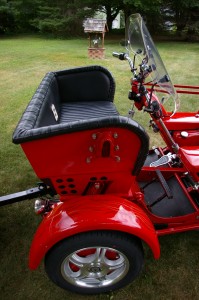 their own rear ends in what once a Ferris wheel seat. The seat has an Aug. 8, 1905 patent date cast in it. Three years ago, when coming home from a trip to California, they even stopped at the Eli Bridge Company in Jacksonville, Ill. to show how off how the company’s seat had been adapted. “There’s 27 people who work at the factory and 27 people standing around it,” Ken said.

Like a car, the trike has a floor clutch as well as a hand shifter. There are dual tachometers and matching four-gallon gas tanks. The trike’s range is about 120 miles. It only gets 22 mph pulling a trailer, which Ken fashioned from an old bumper car. The tires only last about 4,000 miles. A total of $12,000 was spent getting the trike on the road, and Ken estimated that he’s spent an additional $3,000 in modifications. “Just about every year it went up on the lift in winter to make changes,” Ken reported.

Not surprisingly, the biggest challenge in building the trike was getting the two engines to run smoothly in tandem. “I fooled with it for two years using various vacuum gauges and timing lights. The answer was an infrared temperature gun,” he said. What he did was ride the trike for about 20 miles and then compared the temperatures of the headers. “The first time I did it one motor was running 30 degrees hotter than the other. The hot one is the one that’s working harder.” He now tries to keep them within five degrees of one another.

For protection, the trike has three windshields – one up front and one each in front of the driver and passenger – but wind and wind chill can still be a factor when taking it out. “It gets down to 50 degrees and I have to put on a snowmobile suit on. It’s a breezy vehicle,” Ken said.

However, the fun outweighs any drawbacks. Peg recalled the California trip. “Eight thousand miles and I’m ready to go again,” she said.

Since 2010, RIDE-CT & RIDE-NewEngland has been reporting about motorcycling in New England and portions of New York.
Previous Oil Drippings: Catching Up On Motorcycle News
Next Man Swapping Meteorite For Harley