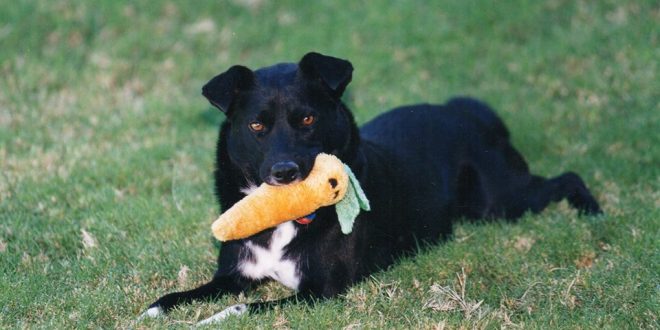 January 13, 2018 Comments Off on Dog Stories – A Life Filled With Dogs

It happens regularly, especially if I’ve been away from home for an extended period of time. I pull into the driveway, turn off the ignition,

and instantly think that I need to hurry inside, snap on a leash and walk Cosette.

You’d think that urge would have waned by now. It has been more than two years since Cosette (pictured above) was euthanized due to advanced age, but it hasn’t. She’s still a part of my life. I’m still caring for her even though her ashes are in a metal jar stenciled with paw prints that sits atop a mantelpiece.

Cosette was a black Lab mix, a rescue dog from the Navajo reservation in Arizona, and one of five dogs that have played big roles in my life.

The first was MilStan Stacy, a black, A.K.C-register cocker spaniel that preceded my birth. I believe my parents bought him after mom suffered the sadness of a miscarriage. His lineage could reportedly be traced to the Best in Show winner at the Westminster Kennel Club Dog Show in New York in 1954. The “MilStan” came from my parents names of Mildred and Stanley.

Memories of Stacy are meager, though. Just foggy mental images, and one day he wasn’t around anymore.

The next pup was Bexel, an energetic and noisy beagle. I was about 12 at the time and insisted on having a dog. My dad found a breeder in Glastonbury who had a litter of six-week-old puppies. We brought him home in a wicker basket that had been stuffed with a blanket.

Being my dog, I got to name the beagle. One night during dinner, I glanced at the bottle of vitamins on the table. They were “Bexel” brand from McKesson & Robbins. Eureka! I had a name for the dog – appropriate because Bexel the pup was a hyperactive “pill.”

For whatever reason, my mom snapped a picture of me holding Bexel and sent it off to the pharmaceutical company with a note explaining how the dog was named after one of their products. A while later, the company sent a copy of its in-house newspaper, which contained a story and the picture on the front page.

Does this mean I have a drug company to thank for pursuing a career in a journalism?

I eventually went off to prep school and college, and then a career in news that took me to Phoenix. It wasn’t until 1985 that the third dog appeared. A girl friend and I were living together and thought a little canine companionship might be fun. We soon welcomed Berrenger!

Berrenger was a red/blonde cocker spaniel, named after the short-lived TV series “Berrenger’s.” The show was NBC’s answer to “Dallas” on CBS and “Dynasty” on ABC and was set in a glamorous New York department store. I was a TV critic at the time, so, perhaps, I felt the name fit as a pet. We registered him with the A.K.C. as “Lord Berrenger.”

Berrenger was affectionate, inquisitive and dumber than a doorstop. He also turned out of be epileptic, which scared the hell out of me the first time he had a seizure.

My girl friend and I eventually went out separate ways. I replaced her – no, not really! – with a second dog who taught me the valuable lesson to never dog shop while intoxicated.

What transpired was that a Danish friend from work had an extended afternoon dinner party on her back patio. Much beer and aquavit were consumed. Several of us went for a walk and stopped briefly at the house of a neighbor who was trying to dispose of a young sheltie. In my stupor, I agreed to allow the guy to bring the dog over the next day for a “test visit.” Sir Galahad never went back.

Galahad was obedient, loyal and incredibly smart. My house had a doggy door that opened into a large back yard that was surrounded by a seven-foot block fence. One night, in the middle of the night, Galahad came to my bedside and began barking. I got up quickly and, not seeing Berrenger anywhere, ran to the family room, flipped on the rear floodlight and bolted outside.

Berrenger had evidently gone outside, had a seizure and toppled into the in-ground swimming pool. I quickly scooped him out of the water. He was a bit dazed but otherwise OK. His buddy Galahad had saved his life by awakening me.

Eventually, Berrenger reached his end and had to be put down. That left me with only Galahad until the daughter of a close friend tipped me to a pet adoption planned for the next day at a nearby pet store. She said there was young black Lab mix in need of love that I just had to adopt.

To be nice, I showed up and spotted the animal cowering under a folding table. The dog must have been abused because she was terrified. How could I not take her home and try to make the rest of her life more pleasurable? I named her Cosette after the character in Victor Hugo’s “Les Miserables.” She was anything but friendly at first. Just look at her and she’d yip and run away. It took time for her to trust humans.

In 2002, with Galahad and Cosette safely ensconced in the back of the Subaru Outback, I moved back to Connecticut. Galahad grew old and had to be put down. So did Cosette in December 2015. With Berrenger and Galahad, I couldn’t stand witnessing the vet doing the deed, but that wasn’t the case with Cosette.

Perhaps because she’d had such a horrible start to life, I wanted to make sure she departed knowing that she was loved. l stretched out on on the floor of the examination room hugging her and crying for about 15 minutes before the vet finally came in to do what was humane and necessary.

Come spring, if I can stand it, I may finally sprinkle Cosette’s remains in the woods behind the house where the ashes of mom and dad have already been scattered. There are daffodils planted there and their wishes were to “bloom every spring” after they were gone. It’s a nice setting.

Since 2010, RIDE-CT & RIDE-NewEngland has been reporting about motorcycling in New England and portions of New York.
Previous Crotona Midnight Run Postponed, Siciliano Already Exhausted
Next Return of the Cafe Racers