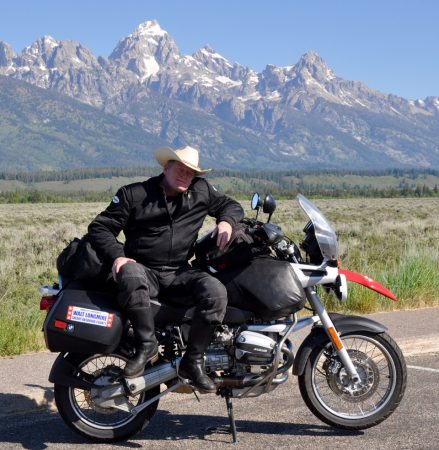 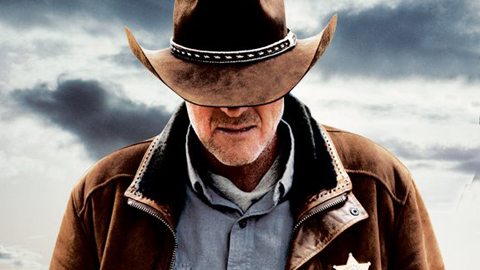 Craig Johnson is a best-selling author and a motorcycle enthusiast. His “Longmire” mysteries about a Wyoming sheriff have sold more than 1.5 million copies

and been turned into a television series that shifts from the A&E cable network to the Netflix streaming service this month.

A new novel, “An Obvious Fact,” gets published Tuesday and uses the Sturgis Motorcycle Rally as a backdrop. That gave RIDE-CT & RIDE-NewEngland a good reason to ask Johnson a few questions this week in advance of a book tour visit to New England. He will be at the Music Hall Loft in Portsmouth, N.H. at 7 p.m. Wednesday for a Q&A and book signing:

Bud Wilkinson: Let me start by admitting to being a newcomer to Longmire. Going on the assumption that I’m not alone (although I may be) and that the setting for “An Obvious Fact” will likely introduce new readers/riders to Sheriff Walt Longmire, how did the character, the supporting players and the entire series of mysteries originate back in 2004?

Craig Johnson: The “Longmire” series started as a response to all the CSI stuff that was out there in both television and books. It seemed to me that 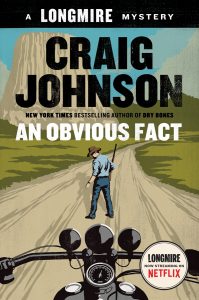 technology was robbing the stories of their humanity, so I started thinking what if you did a procedural that took place in the least populated county in the least populated state in the country – that would force you to focus more on character and place, and that’s where the best writing is done. “An Obvious Fact” is the twelfth novel in the series along with two novellas and a collection of short stories. We’ve been on the New York Times Bestseller’s list for the last seven years and they’ve made a television show that’s on Netflix with a new season debuting September 23rd, so I guess it was a successful gamble.

BW: You’re a motorcyclist. Why so long to incorporate your two-wheeled passion into a major part of a Longmire plot? Were you consciously trying to expand your audience into the riding community or was it just that the Sturgis Motorcycle Rally offered an irresistible, chaotic setting?

CJ: Well, the books are set in the contemporary West and in my part of the west, Sturgis is a big deal. I like having Walt dealing with the things that actual western sheriffs deal with and not chasing Al-Qaida in Crook County or on a cruise ship. I’ve always had motorcycles and really like them, whereas Walt doesn’t. I’ve done Sturgis, and it’s quite the circus.

BW: “An Obvious Fact” contains lots of historical nuggets, such as how the Sturgis Motorcycle Rally got started and some Indian history. Is this a one-off situation or is it always your goal that readers come away maybe having learned something from your novels?

CJ: I think you have a responsibility to the reader to inform them about a place, but especially if it’s a place you love. My ranch is here on the high plains at the foot of the Bighorn Mountains on the Wyoming/Montana border and it’s a beautiful place to ride. I think history provides a context for the reader and it’s fun for me to dig up those bits of history that might not make it into the textbooks.

BW: Your bio notes that you own three motorcycles; a 2009 Harley-Davidson Softail Cross Bones, a 1996 BMW R1100GS and a Kawasaki KDX 400. How did you get introduced to riding? With a Cross Bones and a GS, am I correct in assuming that you like all types of riding? In “An Obvious Fact,” Henry Standing Bear competes in a hill climb. Have you ever tried it? And what’s your most vivid riding memory?

CJ: Four, actually, (the fourth being a 2000 Harley-Davidson Sportster)… I’m a fan of all types of riding with a collection of on-road and off-road bikes. You have to remember that there are ten thousand miles of unpaved roads in the state and that’s the place my novels usually take place. One of my favorite things to do is pack up a lunch and take off on one of the bikes for a day trip and do a little research… I raced motocross when I was young and almost lost an eye, but that’s a long story.

BW: Is the Sturgis Rally an event you partake of, or do you avoid it like the plague? For riders here in the East who have never made the trek, does it need to be on every rider’s bucket list?

CJ: I think you have to try everything once and the Sturgis Rally has to be on the list, it’s like Las Vegas and you just need to surrender yourself to the excess and embrace it.

BW: Is there a motorcycle adventure yet to be checked off on your bucket list?

CJ: I’d like to ride to Alaska or Tierra Del Fuego, but I’d also like to run 61 from Memphis to New Orleans, then I’ve got a French translator and her boyfriend who want to run the entire length of Route 66… The road is calling.

BW: It’s safe to say that riding is most always fun. What about writing? A chore? Or a pleasurable word exercise? Do you have a routine?

CJ: I love writing and it’s a part of every day. I get up, get things straightened away on the ranch and then sit down and write. It’s my life.

BW: For Longmire fans, no background is necessary. But what do first-time readers need to know about Sheriff Walt Longmire, Henry Standing Bear and the others?

CJ: Walt and Henry are emblematic of the two major cultures in the contemporary American West, non-Native and Native. Walt’s jurisdiction is alongside the Northern Cheyenne Reservation and these two men sometimes find themselves at odds, but they always remain friends. There’s a lot of humor in the books, which is surprising to people, but anybody whose ever had a difficult job knows that keeping your sense of humor is imperative. 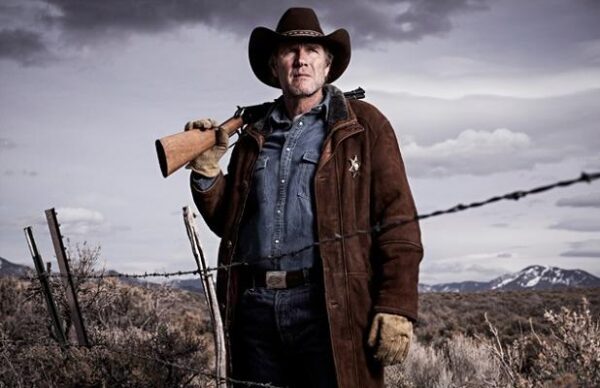 BW: One of the main characters in “An Obvious Fact” is an inanimate object – an MRAP. Ever driven one and are they really as complex and intimidating to operate as the novel suggests?

CJ: Nope, I’ve never driven one, but I kept seeing all these articles about sheriff and police department picking the things up and thought it would be fun to have one in a town of 396.

BW: Are you like many other riders, always on the lookout for another bike? Is there one model that you’d like to own someday?

CJ: I need a British bike to round things out, maybe a Triumph T100. Of course, if somebody were to offer me a ’40-4 Indian like Henry’s, I wouldn’t turn it down. 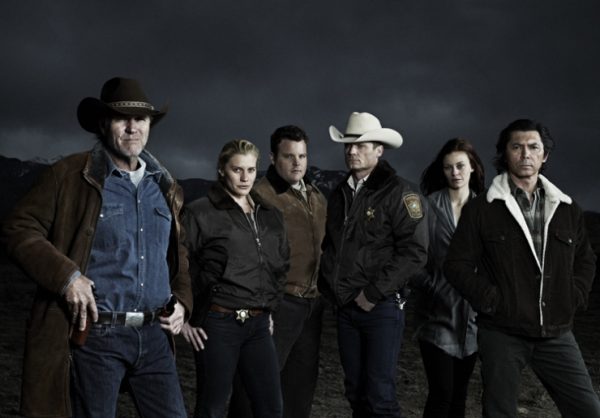 BW: Having started on A&E, the “Longmire” television series wraps up a five-season run this season on Netflix, with the premiere scheduled for Sept. 23. Any thoughts on its final season and the TV adaptation in general?

CJ: Well, first off we hope it isn’t the final season, we’re trending on Netflix practically every night and we’re all hoping the show runs for another ten years. I’m actually friends with the cast and crew and they come up to Buffalo, Wyoming for Longmire Days, along with about twenty thousand of their closest friends… It’s a great show, a little different from the books, but that’s to be expected – it’s two different art forms, books and TV. 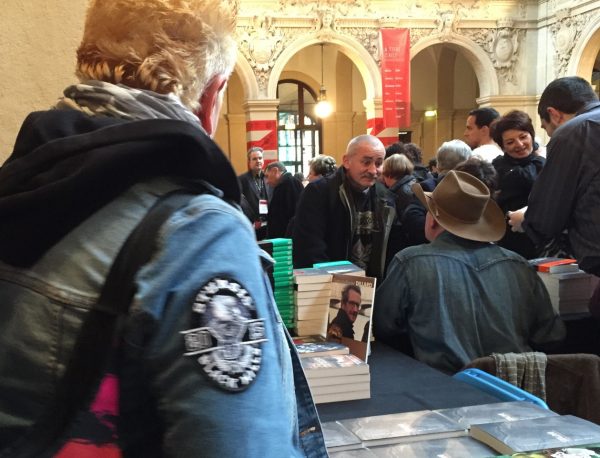 BW: Finally, you live on a ranch on the outskirts of Ucross, Wyoming, population 25. Sounds awfully quiet…

CJ: It’s a little off the beaten path, but I love it here. I built my own ranch, pouring the concrete and stacking the logs and it gives me the focus I need to write the novels, and go for a ride or two…

Since 2010, RIDE-CT & RIDE-NewEngland has been reporting about motorcycling in New England and portions of New York.
Previous Is “Harley and the Davidsons” Accurate?
Next Fiery Start To Motorcycle Cannonball