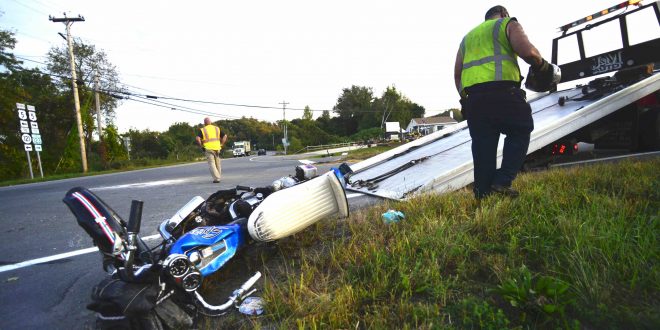 Worden reported on the page that “while driving along a truck pulled directly in front of them.”  She continued, “They had no recourse or time to react and they took a direct hit.”

Lynde is well-known in the Vermont motorcycling community having operated Lynde Motorsports, the repair and service shop located at 79 Flat St. in Btarrtleboro.

In a Hill Country column last year, RIDE-CT & RIDE-NewEngland’s Arlo Mudgett described Lynde as a “wicked nice guy” and “knowledgeable professional,” and termed Lynde Motorsports as being “as much a cultural center as it is a repair facility.”

Regarding her father, she wrote, “He has several broken bones, these will be addressed at another time. Today he is having surgery to place two (stents) to repair a weakened aorta. This surgery was needed before anything else could happen. They also determined he needed his spine fused today, which we were hoping was not going to be needed. They are fusing from T4 to T10, which will help a fracture of his T7. There are other injuries that need to be looked at and assessed, but the team needs to keep determining what is needed first and foremost.”

Regarding Laura, she wrote, “She is going in for surgery to repair her broken wrist and we are hoping her 5 broken ribs heal on their own and will not need surgery-she is incredibly strong and amazing!!!”

Worden told the “Brattleboro Reformer” newspaper that she’s hoping the crowdfunding effort “reaches its goal and surpasses, because it’s going to be a very long time before he’s working again.”

Since 2010, RIDE-CT & RIDE-NewEngland has been reporting about motorcycling in New England and portions of New York.
Previous Motorcycling’s Future Looks Electric
Next Eats: B.T.’s Smokehouse In Sturbridge, MA