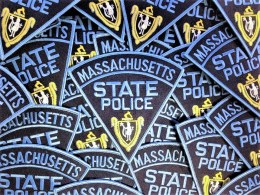 April 8, 2019 Comments Off on Motorcyclist Hit, Seriously Injured By Ladder

HAVERHILL, MA – A 62-year-old BMW rider from Dracut, MA was seriously injured on Saturday when he was hit by a ladder that came out of the back of a pickup truck while he was riding his vintage 1985 motorcycle southbound on I-495 here.

The rider, whose name wasn’t provided in a press release by the Massachusetts State Police, crashed in the roadway after being struck by the ladder. A passing motorist described the ladder in a Facebook post, saying it “looked like one of those lightweight aluminum ones.”

The motorcyclist was transported to Lawrence General Hospital before being airlifted by medical helicopter to a Boston area hospital for treatment of serious injuries.

The ladder was carried in a 2009 GMC Sierra pickup driven by an unidentified 38-year-old man from Haverhill, who remained at the scene of the crash and was cited for operating with an unsecured load.

An award-winning print and broadcast journalist, Bud Wilkinson writes the "RIDE-CT" motorcycle column and the "My Ride" vintage car feature for the "Republican-American" newspaper in Waterbury, CT. He studied journalism at Ohio Wesleyan University where he received a B.A. degree. He currently rides a 1987 BMW R 80 RT and a 2014 Triumph Bonneville.
Previous CSP Reminds Drivers To Watch For Motorcycles
Next Destinations: Museum Of Firefighting