March 5, 2012 Comments Off on Newspaper Column Gets Email Reaction

Maybe I’m showing my age – that’s why I have two vintage bikes in the garage as well as one that’s borderline vintage – but in a world of website comments, Facebook posts and Tweets, it’s nice to receive something as old-fashioned as an email (or two):

I read your article today (March 3 in “The Republican-American”) about the Vincent Black Shadow. In the late fifties, I used to ride with a couple of friends of mine in Salina, KS. I 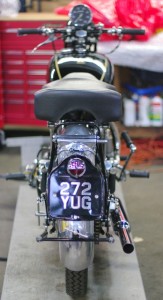 was in the Air Force at the time and they lived in Salina and worked at the Saline Fire Department. One of them, his name was Bob Franklin, rode a Vincent Black Shadow.

My other friend, Byron Mattison, owned a 1958 Harley FLH – same as mine – before he bought a ’58 BMW R60. The three of us would ride together and do a fourth gear roll-on. When we were flat out doing 95 miles per hour, Bob Franklin would yell at us and ask if we were going top speed. When we acknowledged that we were, he would roll his throttle on some more. As he got a short distance ahead of us, we could hear him shift into fourth gear and leave us in the dust. About three miles further on, just to add insult to injury, he would be parked by the side of the road, sitting on the grass, waiting for s to go by.

He said that his top speed was around 130 mile per hour. Not bad for a bone stock motorcycle in the 1950s.

I look forward to reading your RIDE-CT column each week.

Great story. Did he ever let you his Black Shadow? If he did, you are indeed a lucky man.

What a relief. I was a little concerned. The only reason I purchase the Saturday “Republican” is for your column. When I bought a couple of issues, only to find no RIDE-CT, I thought that was it. Glad to see it’s back and I assume you are in good health.

My health is fine. Thanks for asking. As for RIDE-CT, the Accent section recently got a new editor who decided to whack some local features in favor syndicated material; at least that’s what he told me. RIDE-CT has been cut to every other week, while the Beer Snob column written by Will Siss has been trimmed to once a month. I offered to take a pay cut to keep RIDE-CT weekly, but he said it wasn’t a money issue. While I personally don’t see how generic stories from elsewhere will attract more readers than fresh, local content about people who actually live in the circulation area, it’s not my call. Consequently, I’m working ever harder to improve the content of this website. The plan seems to be working as both readership and advertising support are up dramatically from a year ago.

Since 2010, RIDE-CT & RIDE-NewEngland has been reporting about motorcycling in New England and portions of New York.
Previous Safe Riding: Looking But Not Seeing
Next Oil Drippings: News and Opinion