When I was a kid, my parents had a rule of never traveling together on the same flight. Their rationale was that air travel was too risky. This was back in the days before Jetways

when airlines flew prop planes like the DC-7 and passengers had to walk across the tarmac. They reasoned that if the airplane crashed, there’d be a tike lacking a mom and a dad. Many motorcyclists have long faced a similar dilemma, with most probably choosing to set aside their leathers for the welfare of the child, rather than face the dangers of riding.

Melissa Holbrook Pierson didn’t. In her latest book, “The Man Who Would Stop at Nothing – Long-Distance Motorcycling’s Endless Road,” Pierson recounts how she came to that fork in the road and rolled on the throttle. “How about the danger to my son of living with a perennially pale, soppy mom? Better to have animated one joyous for a brief 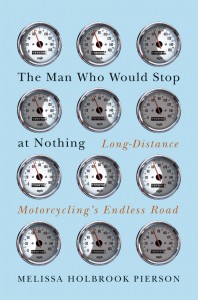 while than to be saddled with the weight of an unhappy presence in the house for extended years,” she wrote.

While the overt purpose of “The Man Who Would Stop at Nothing” is to tell the story of legendary long-distance rider John Ryan, while taking readers into the cultish world of Iron Butt competition, Pierson uses the 191 pages to simultaneously celebrate the innate thrills that all riders feel whenever they leave the driveway. These are feelings that non-riders cannot understand and that riders themselves often have a hard time putting into words.

Pierson, who lives just across the Hudson River in Shokan, N.Y. and is a “LD” rider herself, tried to explain the addictiveness of riding when we chatted by phone last week. “It feels to me like, literally, taking control of one’s life. That, to me, is the only way to live. When you get on, the sense, metaphorically and literally, is about going places. To experience that joy and then to deny it to yourself is maybe the definition of insanity, or at least cruelty,” she said.

If that’s true, Ryan is the sanest man alive. His greatest feat is riding 5,645 miles in 86 hours and 31 minutes. Do the math. That’s averaging 65 miles per hour for 3½ days. Factor in horrible roads, weather and fatigue and it’s an incredible feat.

Pierson said Ryan’s just as mythic in person as he is in her book. “He comes across as truly 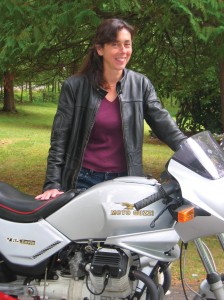 other-worldly,” she said, explaining that he can energize a room by the mere act of walking into it. “This is who he is. He’s so determined and so focused on this moment, whatever that moment happens to be. You realize you’re really in the presence of something unusual in this world.”

The speed of Iron Butt riders is downplayed. “It’s counter-productive to speed,” Pierson observed because of the risk of being ticketed (a time-consuming process), the fact that it uses more gas, and because it can increase fatigue. “Overall, they really are the safest riders on the planet,” she said. “LD riders have boiled and boiled and boiled the experience of motorcycling to its essential nature.”

Since “The Man Who Would Stop at Nothing” was published last year, Pierson has witnessed two distinct reactions from riders who have read it. There are those who not interested in long distance riding. “It probably means you’re not cut out for it,” she said. And then are those who react with “a little glint in the back of their eye.” That response needs no explanation.

Pierson has two bikes. Her daily rider is a BMW R1150R Rockster, while her show bike is a Moto Guzzi Lario. To many of us who enjoy riding, getting on a motorcycle and exiting the driveway is seemingly as important as having oxygen. For Pierson, too.  “I think it could be considered that way given the behavior of people like John Ryan when they are deprived of riding,” she said.

Since 2010, RIDE-CT & RIDE-NewEngland has been reporting about motorcycling in New England and portions of New York.
Previous Pics from Hartford, Springfield Shows
Next Harley’s U.S. Sales Up 5.8 Percent in 2011