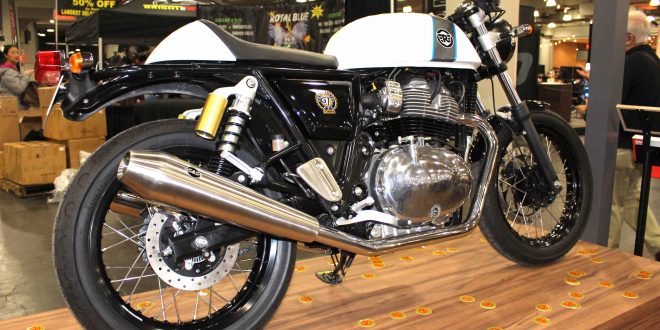 Royal Enfield Targets 2018 To Break Out

It was probably a dozen years ago that a friend urged me to take his worn-orange 1970 Triumph Bonneville for a ride. Having never ridden an old British bike up until that time, I had to quickly adjust to the right-side shifter and left-side brake pedal. What I recall most about

the ride was the Bonneville’s all-metal heaviness and the unexpected power. It seemed like it was pulling from deep in its gut, with a promise of even more thrust had I requested it.

That classic Bonneville instantly popped to mind when Royal Enfield recently revealed two new retro models for 2018 – the Interceptor and the Continental GT. Like that Bonneville, they have 650cc engines, which is larger than those found on any other Royal Enfield model. The Interceptor doesn’t look all that different styling-wise, either, and also comes in orange.

(I can already hear friends proclaiming, “Look out, Bud’s bike-shopping again!” even though that isn’t the case.)

Royal Enfield’s announcement did pique my curiosity to the point of wanting to seriously inspect the new models up close at the Progressive International Motorcycle Show in New York earlier this month as well as talk about them with Rod Copes, president of the company’s North American division.

That Royal Enfield is coming out with a pair of middleweights that look decidedly British isn’t really surprising given the company’s heritage and its desire to increase profits. It may be headquartered in India, but its roots are in England where Royal Enfield began building bikes in 1901. That’s two years before Harley-Davidson launched, which makes Royal Enfield the oldest continuously operating motorcycle builder on the planet.

Royal Enfield started selling bikes in India in 1949 and partnered with Madras Motors in 1955 to begin making 350cc models in India. When Royal Enfield in England stopped making motorcycles 50 years ago, the subsidiary in India kept churning out those small Bullet models. It’s now the fastest growing motorcycle company in the world, having gone from producing 50,000 units in 2010 to more than 800,000 units this year. That’s more than double Harley’s output, albeit Royal Enfield concentrates on small displacement models.

Back stateside, Royal Enfield has had an up and down ride. Back in the 1960s, it sold middleweight Interceptor models – guess that’s why the name has been revived. More recently, it has been selling 500cc, single-cylinder models. It wasn’t until two years ago when Royal Enfield got rid of an independent distributor and set up a U.S.-based subsidiary that it began to get more aggressive, although it did shed some dealers at the time.

Copes, who had spent 20 years at Harley-Davidson and was formerly senior vice president of global sales, was hired to build the brand. He set up shop in Milwaukee. Yes, the home of Harley. The process has been slow. “When we started Royal Enfield North America two years ago, we really looked at it as a two-phase process,” he said when we chatted at the company’s motorcycle show display.

“The first phase was establishing the infrastructure, the processes, the systems and the dealer network. We’re well on our way. We feel comfortable with where we’re at, so 2018 is really phase two, which is about the brand and about the products. The new motorcycles will be very critical to reestablishing the motorcycle brand in the United States.”

In addition to the parallel twin-powered Interceptor and Continental GT, Royal Enfield is also introducing a small (411cc) adventure touring model called the Himalayan. The model’s pronounced Hi-MAHL-e-an, not HIM-mill-lay-an.

“Royal Enfield has always been focused on the middleweight segment,” said Copes, calling it “ … an aspirational and accessible motorcycle brand. When the twins were in the design phase as well as the Himalayan, it was all about how do we make a really nice motorcycle but make it be accessible? And our term for that is affordability as well. The price point has always been a target area.”

Both the Interceptor and Contintental GT will sell for less than $7,000, which is more than $3,000 less than the cheapest current Triumph Bonneville. The Himalayan is priced at only $4,500.

“We’re truly upping our game in every aspect of the business – the capabilities in manufacturing, the improvement in quality, design and development,” he said. “And it’s through incorporating new people, new talents, new skills into the company (that Royal Enfield can) really step up our game in all aspects of what we do. We really believe it’s our coming out party,” said Copes.

The catch is that Royal Enfield still needs to develop dealers. It currently only has one dealer in New England (Mark’s Motorsports in Enfield, CT) although it does have 70+ nationally, including Royal Enfield of Albany in Schenectady, NY. Copes said the company is adding two to three a month, despite the fact the motorcycle industry has been in decline for a couple of years.

“It’s been a challenge to get dealers in the United States,” Copes acknowledged. “We’re in a marathon, not a sprint, so we want to get the best dealers and we’re not going to sacrifice on the quality of our dealerships. It’s taken a little longer, but we’re very pleased with our result.”

Examining the new Royal Enfield models at the IMS revealed that the fit and finish are fine, and there’s no arguing that the price is right. With the Interceptor and Continental GT cafe model, Royal Enfield has bikes that are small enough to attract new riders, while still appealing to those of us who recall the days when Triumph and BSAs cruised the landscape.

Royal Enfield failed to bring an orange Interceptor to the show. Too bad. I’m not shopping, but if I were…

Since 2010, RIDE-CT & RIDE-NewEngland has been reporting about motorcycling in New England and portions of New York.
Previous Dealer Perspective: Showroom Etiquette
Next Bike-urious