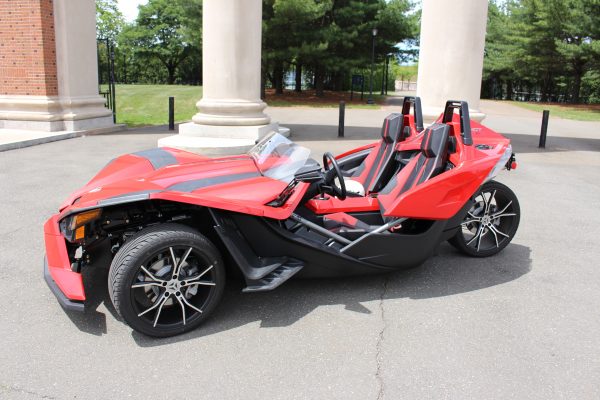 Cops waved. Pedestrians stared. Other drivers did double-takes. Some folks whipped out phones to take pictures. Others gave the

thumbs-up sign. All it took to get such intense attention was to drive around parts of New Haven and West Haven for an hour or so Thursday afternoon in a Polaris Slingshot, the exotic three-wheeler that isn’t yet legal to register in the state.

That changes July 1 when a new law in Connecticut enables the Department of Motor Vehicles to register a new category of motor vehicle known as the “autocycle,” which includes the Slingshot. Getting to drive one on city streets (with an out of state license plate on the back) admittedly produced a giddy juvenile feeling of getting away with something.

Libby’s Motoworld borrowed a demo model Slingshot SL from Polaris this week and an invite was extended to RIDE-CT to test drive it. Overall, the demo proved exhilarating and a tad unsettling; probably because the peppy Slingshot is so darn different. Powered by a 2.4 liter engine, the belt-driven Slingshot has two wheels in front, one in rear and is definitely tons o’ fun to operate. 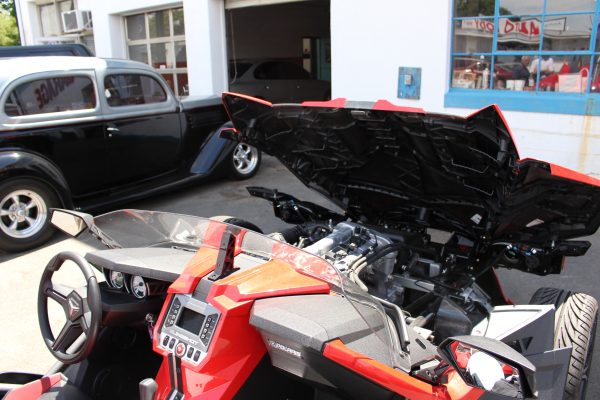 But, first, let’s backtrack to December. That’s when Polaris brought a Slingshot to the DMV in hopes of convincing the powers that be to rule that it could be registered under existing law. However, the DMV quickly reaffirmed an earlier judgment that the Slingshot cannot be “classified or registered as a motorcycle.” That resulted in “autocycle” legislation being introduced, passed and signed into law.

Having now driven it, I can see why the DMV made the call that it did. With side-by-side bucket seats, steering wheel, foot clutch, and a five-speed shifter in a center console, the Slingshot is not a motorcycle. Based on experience as a motorcycle rider and as a one-time owner of a Mazda Miata roadster, the Slingshot is much, much closer to a car than a bike. Heck, it is a car that manages to skirt all the regulations and requirements of a four-wheeled vehicle. 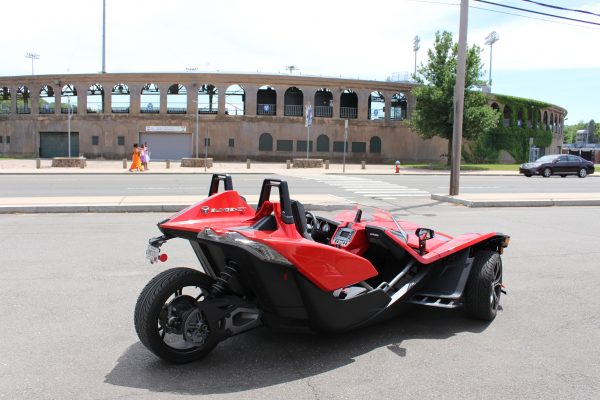 Unlike a car, it doesn’t have driver or passenger doors.  One must step into the cockpit. That’s fairly easy. Getting out from the behind the steering wheel, though, requires a contortionist’s talents. Unlike with a car, the seat belt isn’t hung from an outer pillar (because there isn’t one), rather from the center of the back wall of the cockpit. The result is that the seat belt is less intrusive when hooked than in a car or truck.

What’s most noticeable at first upon getting behind the wheel are the two fenders up front that appear as huge ears above the wheels. The seating position is so low that they’re initially distracting, but eventually they fade away. A push-button starter in the center of the dash – below the video display for the back-up camera – fires the engine. This produces some sweet exhaust sounds. In this respect, the Slingshot does replicate a motorcycle. 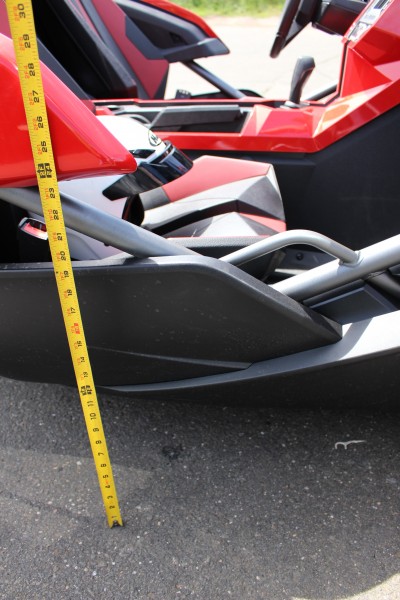 Slip it into first gear and let out the clutch and the Slingshot leaps forward. Both the clutch and transmission are wonderfully smooth. Despite its plastic shell, the Slingshot feels much heavier and planted than it looks, and the wide rear rubber produces a very stable ride. I’d expected the back end to feel “light” when cornering but that wasn’t the case in city operation. Co-pilot George Libby did inform me the steering is more sensitive at freeway speeds.

While it was certainly hard not to smile when driving the Slingshot, it was hard to talk with a passenger. The Slingshot’s irritatingly noisy – not the exhaust, rather the beast itself, likely the drive train. A test drive was insufficient to determine whether the whine would eventually become tolerable or exasperating.  I’m guessing the latter. 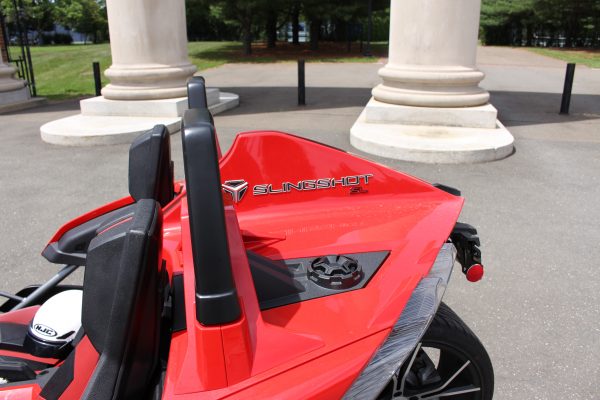 The Slingshot has a base price of $19,999. The SL model costs $23,999 and the high-end SL LE version costs $24,999. Given what you get, the prices seem fair. What you don’t get is a year-round vehicle or one to take shopping. The Slingshot is unquestionably a novelty vehicle designed solely for fun, and it certainly delivers. Demand for it has been high at Polaris dealers that have been chosen to sell the Slingshot, and it’s easy to understand why.

I’m sure Libby’s Motoworld will sell many Slingshots. Maybe it’s the practical Yankee in me, who drove my mom’s MGB when in college and who has always craved two-seater convertibles, but I’d favor a Miata over a Slingshot if bucks were plentiful. But I do promise to gawk whenever a Slingshot goes by. It is an appealing eye-catcher that promises to be exceedingly popular. 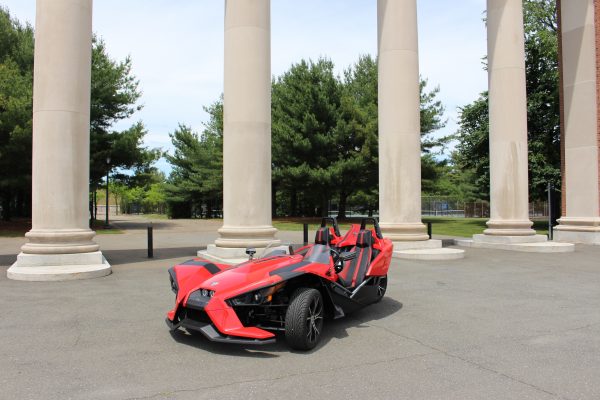 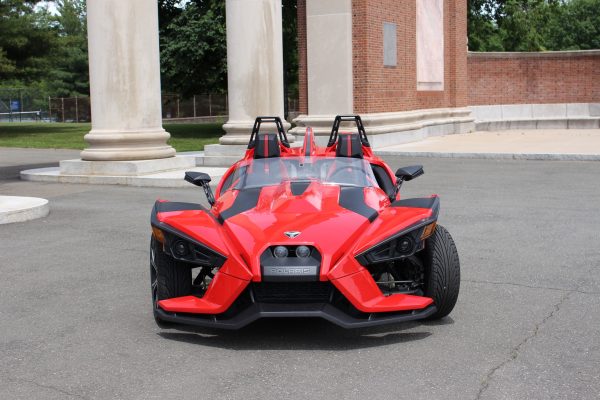 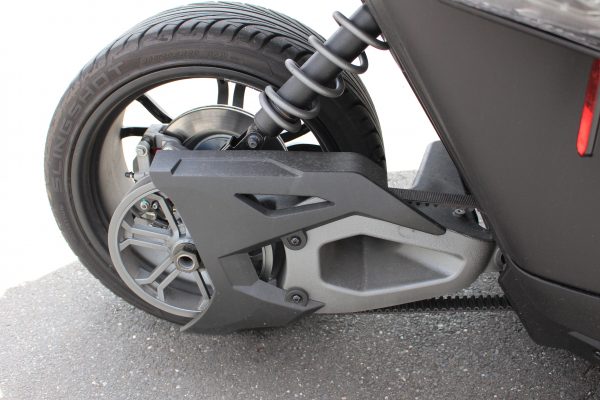 Since 2010, RIDE-CT & RIDE-NewEngland has been reporting about motorcycling in New England and portions of New York.
Previous “Mad Men” Era Photographer Dies In NYC
Next Test Ride: Ducati Multistrada S