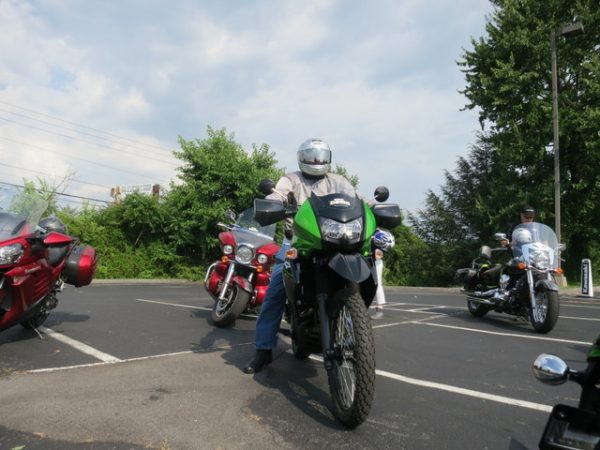 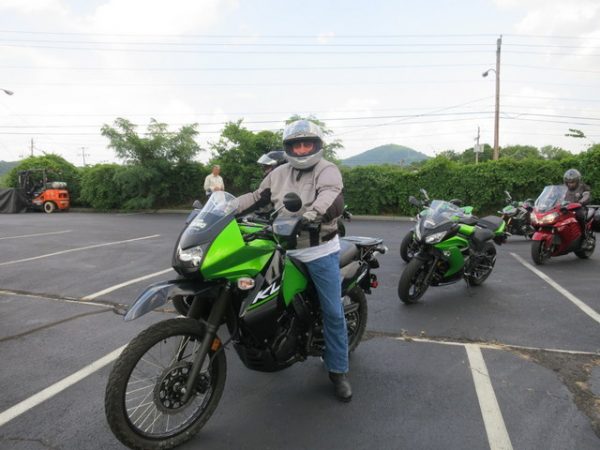 The venerable Kawasaki KLR650 dual-sport has been around since 1987 and has been very popular model. It remained relatively unchanged from its

For 2014, Kawasaki has brought out a “New Edition.” The front and rear suspension have been upgraded to increase the spring rate and rebound damping. Also, the seat was reshaped to be narrower up front which should help shorter riders get their feet on the ground at a stop.

Kawasaki brought a demo fleet of 30+ street bikes to the recent Concours Owners Group 2014 National Rally in Johnson City, TN for two days of test rides. I had hopes of trying out a few different bikes including the Ninja 1000 with bags, Ninja 6R, and the KLR650. After returning from a day ride in the Cherokee National Forest, I wandered over to the demo area and was able to immediately get into the last 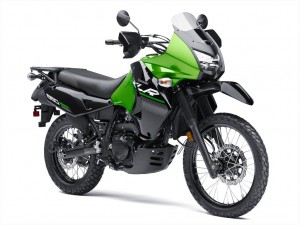 group of the day and ride the KLR650.

While my full-on dirt riding days are well in my past, living in New England does provide opportunities to make use of a dual-sport motorcycle. The KLR650 would be a great companion to a touring bike and, with an MRSP of $6,599 for the New Edition, many riders use them as low-cost adventure touring bikes. It is perfect for tackling the many dirt roads of Vermont while being well suited for the small twisty roads in northern Connecticut. It could also make a great summer commuter.

Arriving at my designated time and having previously registered, we were given the demo ride spiel. After that we could head over to the bikes, get our gear on, and mount up. The first thing I noticed was that the combination of 35-inch seat height and my 31-inseam made it difficult to flatfoot the bike with both feet. I could get one foot flat and the other I was on the ball of my foot. This was a definite improvement over the previous seat design.

The KLR650 fired up without issue. I snicked the shifter into first and got a feel for the clutch and friction zone before heading out on the 30-minute ride. The 5-speed gearbox shifted nice and smooth. Acceleration and power was good and relatively linear, although there did feel to be a slight hesitation as the larger thumper spun up. I found the KLR650 handled nimbly and reassuring on local streets. The brakes provided ample stopping. 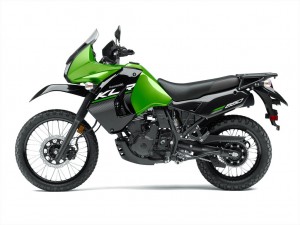 When we hit the expressway, the bike easily accelerated to over 70 mph and would cruise nicely at 60 mph without excessive vibration. Much of the vibration I felt I attributed to the semi-knobby tires and big thumper of an engine. While it did well enough on the expressway, I’m not sure it would be desirable to trek hundreds of miles at highway speed. There are much better suited bikes.

I also noticed that the KLR650 was more affected by wind blasts than my large sport-tourer is. The bodywork creates a nice pocket for the rider, which should help defect wind and some rain. 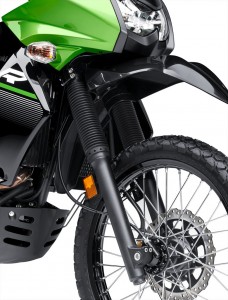 Before I knew it the ride was over. The overall experience was excellent, and this bike is now on my short list to ownership. My only disappointment was that I was not allowed to test the KLR650’s off-road prowess as the ride was all asphalt, and no off-roading was permitted. That will change the next time I ride one.

Since 2010, RIDE-CT & RIDE-NewEngland has been reporting about motorcycling in New England and portions of New York.
Previous Suzuki Is Recalling 2014 V-Strom DL650A
Next Suzuki GS650 Is Newman’s Own