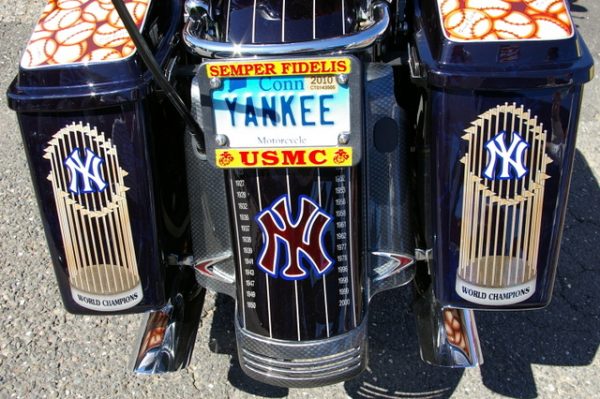 With Major League Baseball’s regular season wrapping up and the playoffs soon to begin, Mike Beauregard was feeling a bit guilty earlier this week because his favorite team was in a slump while a hated rival was coasting having won its division. “I think I jinxed the Red Sox doing that bike,” he said, referring to the $15,000 custom paint job that he did last winter on a 2006 Harley-Davidson Street Glide owned by Angelo Ortisi, Jr.

To fans of the New York Yankees, Ortisi’s bike couldn’t look better. “It’s a real piece of art. It’s not overdone,” proclaimed Ortisi of his bike’s pinstriped theme with the Yankees’ top hat logo on the gas tank and the intertwined “NY” letters ghosted into the paintwork. 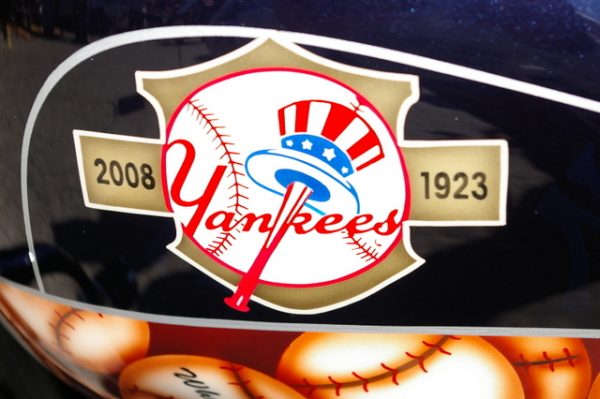 Add forks that resemble Louisville Slugger baseball bats and dozens of painted baseballs, many bearing the names of Yankees past and present, and the result is a moving 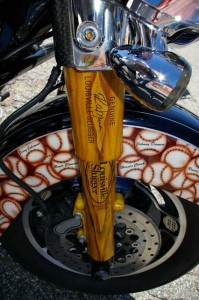 monument to the Bronx Bombers.

“I looked for seven years for someone to paint a bike for me,” said Yankees’ worshipper Ortisi, who lives in Mansfield Depot, CT. “I’ve been a fanatical fan all my life and a huge Thurman Munson fan.”

Given the Boston-New York rivalry across southern New England, the odds may have dictated that when Ortisi finally found a custom painter to do the job, the guy would be a Red Sox loyalist. “I kind of cringed at first,” Beauregard recalled of being approached to do the job.

Beauregard, whose business is called Slick Willy’s Custom Painting and is based in Granby, MA, said the biggest challenge in creating the theme bike was “designing it. You’ve got to make it come together. You don’t want it to be too gaudy.”

His attention to detail is evident. In showing off the bike to RIDE-CT, Ortisi proudly noted that the painted baseballs wrap underneath the hard saddlebags and reflect in the chrome parts elsewhere on the bike. 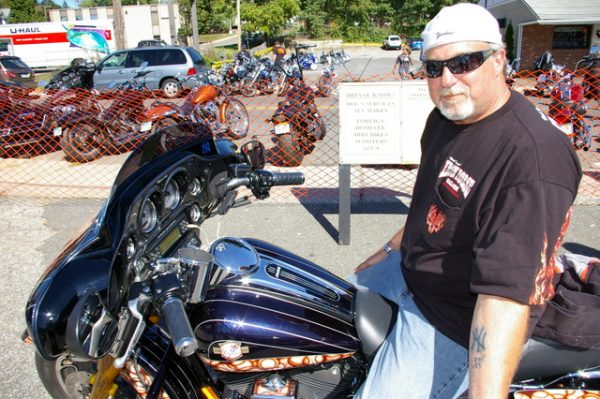 There are 186 names listed on the baseballs. “I picked names of guys I really like and guys who contributed over the years. Only one name on the bike wasn’t a Yankee player,” said Ortisi. Any Yankees’ fan can instantly guess that the non-player is former manager Joe Torre.

Other adornments on the bike include replicas of MLB’s World Series trophy on the rear of the hard bags and a listing of the 26 years that the Yankees have won the World Series on the rear fender. The taillight, by the way, is an “NY” set into the fender. The bike’s license plate says “YANKEE,” too.

Since getting the bike back from Beauregard in late February, Ortisi has put more than 8,000 miles on the odometer. “I ride it all the time. I do a lot of benefit rides,” he said.

Ortisi and Beauregard have become friends as a result of the bike. “The Yankees aren’t the Yankees without the Red Sox, and vice versa,” said Ortisi.

Said Beauregard somewhat plaintively, “Somebody has to let me do a Red Sox bike.”

Beauregard did get a measure of revenge when he painted a matching helmet for Ortisi. Behind one of the ghost NYs was a subtle “B” for Boston. “I thought it was really neat,” said Ortisi. “The B is behind New York – right where they belong.”

(Editor’s note: This column was originally published in “The Republican-American” newspaper on Oct. 3, 2009)

An award-winning print and broadcast journalist, Bud Wilkinson writes the "RIDE-CT" motorcycle column and the "My Ride" vintage car feature for the "Republican-American" newspaper in Waterbury, CT. He studied journalism at Ohio Wesleyan University where he received a B.A. degree. He currently rides a 1987 BMW R 80 RT and a 2014 Triumph Bonneville.
Next John Schnabel – Content Editor