Playing a bit of catch-up… 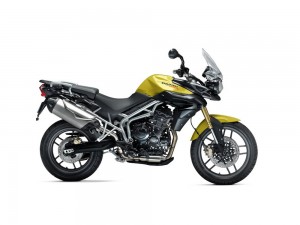 800 XC as recall notices were issued in the past week or so not once but twice. A problem with the engine management software on certain 2011 and 2012 models, which could cause lower RPMs and stalling when decelerating, affected as many as 1,485 bikes. Dealers are fixing the glitch by downloading new software. Also causing a problem on some 668 bikes is a defective return spring on Tiger’s optional center stand. Dealers are replacing the springs.

Over in Russia, Prime Minister Vladimir Putin has kicked off his re-election campaign by getting his biker buddies together and riding a Harley-Davidson trike to a rally at a battleship. Here’s the YouTube video:

Since 2010, RIDE-CT & RIDE-NewEngland has been reporting about motorcycling in New England and portions of New York.
Previous Tales From 2011 Brit Jam
Next “If you ever decide to sell…”