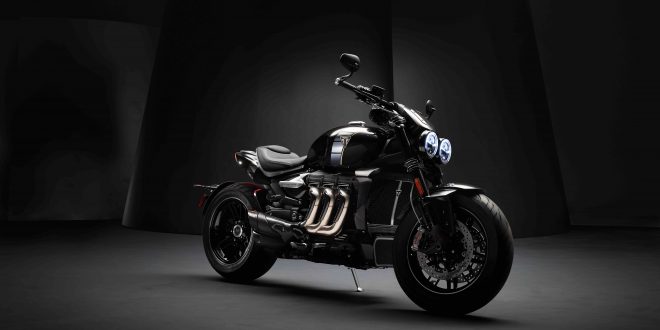 HINCKLEY, LEICESTERSHIRE – It’s even bigger and even more expensive than the previous Rocket 3. Triumph today announced a new, limited-edition Rocket 3 TFC model for 2019, with a larger 2,458cc, three-cylinder engine and heftier $29,000 price tag.

Boasting 168 horsepower but weighing more than 88 pounds less than the prior Rocket 3, the Rocket 3 TFC will be available in December. Only 750 units will be produced. Only 225 of them will be sent to the United States.

In announcing the Rocket 3 TFC, Triumph proclaimed that it has “the biggest production motorcycle engine in the world” and the highest torque as well at more than 221Nm.

Surprising, the Rocket 3 TFC will be 15 percent lighter than the previous Rocket 3 thanks to an all-new aluminum frame, an all-new single sided swingarm and carbon fiber bodywork.

The shaft-driven Rocket 3 TFC features a 240mm rear tire and a six-speed transmission, along with ABS and traction control. It has four riding modes and shift assist. Seat height is 30.43 inches.

The predecessor Rocket 3 was launched in 2004 and looked like no other motorcycle on the planet. The redesigned version, while still distinct and outrageously muscular, looks a tad more like Ducati’s Diavel models.

The Rocket 3 TFC – the TFC standing for Triumph Factory Custom – retains the signature dual headlamps of its predecessor. Triumph calls it the company’s “most exclusive and desirable motorcycle.”

An award-winning print and broadcast journalist, Bud Wilkinson writes the "RIDE-CT" motorcycle column and the "My Ride" vintage car feature for the "Republican-American" newspaper in Waterbury, CT. He studied journalism at Ohio Wesleyan University where he received a B.A. degree. He currently rides a 1987 BMW R 80 RT and a 2014 Triumph Bonneville.
Previous Staff Inflection: The Worst Stuff Ever Made?
Next Off The Beaten Path: Women Riders World Relay