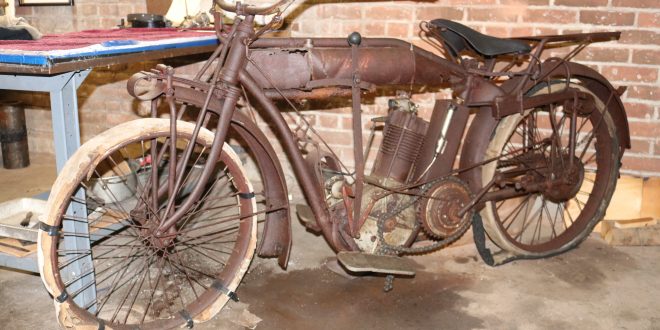 TORRINGTON, CT – It was at the end of a recent Sunday morning coffee klatch inside a motorcycle shop in Torrington that Tim Raindle asked rhetorically, “What’s the value of a piece of rust?”

The decayed subject of his inquiry was parked next to him. It’s more than 100 years old and has an alluring patina as well as bald, fraying white tires. Its worth is difficult to calculate. It is no doubt valuable, but pinpointing what it might fetch depends on its state when sold.

There’s its as-is value. It’s not running. The bottom portion of its gas tank has rotted away, although the name “Indian” still lurks on its left side. It has parts from several model years and its original engine has been replaced.

What if parts could somehow be found and it were made operational again? That would it bring a higher price.

Would parting it out bring even more money? That’s quite for certain as the carburetor alone is worth several thousand dollars.

What if it were touted as a piece of artwork to be displayed in a museum, art gallery or rumpus room? It could potentially bring much, much more from a collector, curator or enthusiast.

Raindle has owned the model from Indian’s early days since April 2020. He acquired it in a cash-barter deal, handing over a 1930 Indian to a friend and getting $5,000 and the older Indian in return. What he received was the rare “Hedstrom” model “motocycle.”

Raindle knows for sure that the engine in the Indian wasn’t installed new at the factory. “It probably came with a V-twin in it. They sold four V-twins to every single. Obviously, at some point, they blew the motor up and replaced it with a 1911 motor,” he said.

Raindle is a native of England who works restoring old motorcycles. He was a protégé of Indian authority George Yarocki, who worked for years at his shop at what was once the Torrington Creamery. Yarocki died in May 2016 and Raindle has continued to work out of the facility.

“I’ve always been interested in the early Indians but they’ve generally gotten beyond my price target,” he said in recalling how he landed the one in his shop at an antique motorcycle show in Oley, Pa. “I looked at the whole thing and decided I could reasonably make a riding motorcycle, although it would be an incredibly long project.”

Over the past two-plus years, though, his thinking has changed as he noticed the original parts on the model and developed an affection for it. There are clamps, hand tempered springs, a solo seat with the Indian logo embossed into the leather, and linkages that were used before the days of cables. There are also the bolts that hold body parts together.

“As soon as I grind off that bolt – one part anywhere – I’ve ruined what it is,” he said, pointing to the bike. “I’ve ruined the historical integrity. That’s the dilemma.”

The original Indian “motocycle” brand was founded in 1901 in Springfield, Mass. by George M. Hendee and Oscar Hedstrom. That was two years before Harley-Davidson launched in Milwaukee. The current revived Indian brand is owned by Polaris.

Hedstrom designed and built the first Indian prototype at a shop in Middletown, Conn. He completed it in May 1901.

Hedstrom’s relationship with the company lasted until 1913 when he resigned. That year Indian produced 32,000 motorcycles at its “Wigwam” factory and was the largest motorcycle manufacturer in the world. It controlled 42 percent of the United States motorcycle market.

In 1916, Hendee resigned as well. All-told, through 1916, Hendee Manufacturing built more than 135,000 Indian models that used Hedstrom’s designs and engines. It wasn’t until the 1920s that Indian dropped “motocycle” and shifted to using “motorcycle” for its products.

A lifelong motorcycle enthusiast, who also owns old British-built Sunbeam, Italian-made Moto Guzzi and German-made BMW models, Raindle’s a big believer that motorcycles should be ridden no matter their vintage.

“I don’t generally like seeing motorcycles parked in museums, but there are exceptions and this one of them,” he said. “It’s a snapshot of what somebody was riding in the ‘20s,” the ‘20s being the 1920s. “It could have been handed down (by the original owner) to the nephew or son who was 12.”

Original Indian Shut Down In 1953

The original Indian company lasted until 1953. Both Hedstrom and Hendee were longtime Connecticut residents. Hedstrom died at his home in Portland at age 89 in 1960. He’s buried in a cemetery in the town. Hendee owned and ran Hilltop Farm in Suffield for many years and died in the town at the age of 76 in 1943.

Despite the fact that Raindle’s Indian is a bit of a mishmash, it is representative of its time as parts didn’t change that much from year to year.

Raindle has only superficial knowledge of the background of his Indian. He knows the previous owner acquired it from a friend who had snagged it at an auction of the contents of a self-storage unit. It had apparently been owned by someone just over the  border in New York near Danbury and was put into mothballs in the 1970s when the owner died.

For now, it sits silently in a workshop. It’s away from the elements, its future an unknown. Its fate could be determined soon. As Raindle noted, it’s a snapshot from a century ago. Does he keep it in its current state? Does he proceed to restore it? Does he strip it and sell the parts? Or does he sell it as-is?

(A version of this column was originally published Nov. 26, 2022 in the “Republican-American” newspaper.)

Bud Wilkinson writes the "RIDE-CT" motorcycle column and the "My Ride" classic car feature in the "Republican-American" newspaper in Waterbury, CT. A graduate of Vermont Academy, he received a B.A. degree journalism from Ohio Wesleyan University in 1975. He is the recipient of a Scripps Howard Foundation National Journalism Award in 1992 and a 1991-92 regional Emmy Award for commentary. He currently rides a 1987 BMW R 80 RT and a 2014 Triumph Bonneville and drives a 2010 Mazda MX-5 Miata and 2008 Ford Ranger pickup.
@https://twitter.com/ridect
Previous Oil Drippings: More Electric Models On Way, End Of The Evo
Next Motorcycles Become “Donorcycles” At Rallies, Study Shows