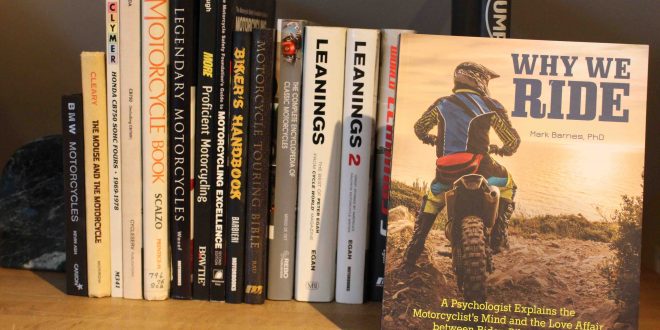 Bookshelf: “Why We Ride”

In hindsight, it probably wasn’t so hard to predict that rider and psychologist Mark Barnes would be successful writing about motorcycling. In his first column for “Motorcycle Consumer News” some 21 years ago, he wrote that “motorcyclists can be divided into two types.” There are

those who are happy to turn the key and go, and those who get equal pleasure from wrenching as riding. “Rarely can those in one group understand those in the other,” he observed.

Barnes’ long-ago assessment and many more that are equally insightful have now been recycled in the new book “Why We Ride.” It’s a compilation of columns/analyses that cover a wide territory, with the assessment about two types of enthusiasts being buried within.

With the title being a statement, not a question, it would be easy to assume the book seeks to solely entertain and inform non-riders or rider candidates, but that’s not really the case. What it does best is open the eyes of existing riders – at least it did mine – to areas under the two-wheeled umbrella that maybe haven’t yet been explored. 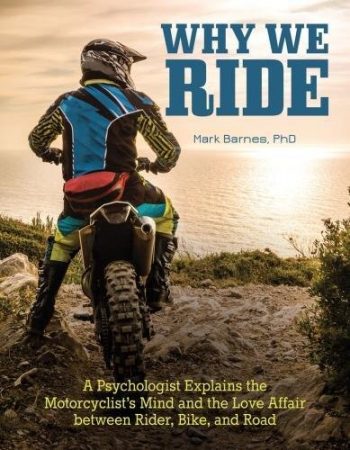 Given the opportunity to cherry pick from 200 columns, Barnes opted to categorize his work. “Why We Ride” is divided into three parts – “Of Rides and Riders,” “Flow for Riders” and “Why We Ride.” Part one broadly covers common experiences of riders, from getting lost or getting fatigued while riding to crashing and working on improving ones skills.

Part two, “Flow for Riders,” delves into sports psychology and examines some mental fundamentals. The section is a repackaging of an eight-part series that ran in “Motorcycle Consumer News” in 2001.

Part three is “Why We Ride: A Thematic Analysis of Motorcyclists’ Motivations.” It’s a re-packaging of the seven-part series that “Motorcycle Consumer News” published between March 2004 and March 2006 that sought to answer why we enjoy riding.

“Why We Ride” is delivered in easily digestible form – that’s what columns are, short essays that can be easily consumed – and makes for an easy book to pick up, nibble on and then put down until, say, next bedtime. I’m still indulging; slowly, so as to absorb properly.

Becoming a skilled rider requires layering; obtaining skills and polishing them over extended periods of time, refining them and always working to improve. Reading “Why We Ride” can be approached the same way; gradually assimilating stories and the lessons therein, and adopting them for personal use.

“Why We Ride” is a paperback with a cover price of $24.99. It is available from Amazon.

Since 2010, RIDE-CT & RIDE-NewEngland has been reporting about motorcycling in New England and portions of New York.
Previous Indian Continues To Grab Market Share
Next Eats: Farmington River Diner In Otis, MA