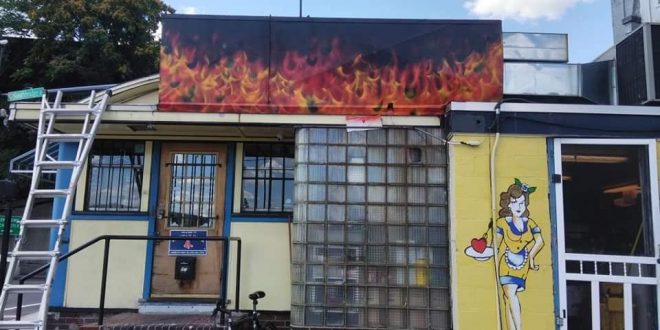 The mural as it was being created

WORCESTER, MA – The mayor of Worcester, Joe Petty, has thrown his support behind the Miss Worcester Diner in its showdown with Harley-Davidson, which is claiming trademark infringement and asking that the eatery remove a mural displaying the motorcycle company’s bar and shield logo.

Meanwhile, Wagner Motorsports, the local dealer for Harley-Davidson rival Indian, has entered the fray via a supportive Facebook post that shows dealership T-shirts that bear an image of the diner (without the Harley-Davidson mural) along with the Indian name and logo.

The kerfuffle began Thursday when Miss Worcester Diner owner Kim Kniskern received a letter from Harley-Davidson requesting that the mural, hand-painted by artist Tony Freitas on an air conditioning duct above the entrance, be removed.

Since then, the story has become worldwide news, with the website Motorbike Writer in Australia even writing about it.

Worcester’s mayor joined the debate Friday evening by imploring Harley-Davidson to “re-consider your request” in a Facebook post.

In the post, Petty wrote, “As Mayor of the city of Worcester, I regularly eat at the Miss Worcester Diner. It is just as an American icon as is Harley-Davidson. What is more American than a meal at a diner? What is more emblematic of America’s love of the open road then (sic) riding a Harley?”

The mayor continued, “While I know that brand protection is important, I do not believe that there is any confusion in this case.”

He then invited the letter-writer from Harley-Davidson, Jesse Johnson, to join him for breakfast at the diner and added, “You will see for yourself that there is no appropriation of your brand.”

In its post, Wagner Motorsports gave a shoutout: “Here’s to the Miss Worcester Diner and Indian Motorcycles! Two American traditions!”

The dealership’s post then noted that T-shirts showing the diner are available at “special pricing” through Feb. 22.

That post soon got a warm response from Kniskern.

Maybe the Miss Worcester Diner should, with Indian’s blessing and some modest ad dollars from Wagner, have Freitas simply redo the mural with Indian’s headdress logo replacing the bar and shield.

Bud Wilkinson writes the "RIDE-CT" motorcycle column and the "My Ride" classic car feature in the "Republican-American" newspaper in Waterbury, CT. A graduate of Vermont Academy, he received a B.A. degree journalism from Ohio Wesleyan University in 1975. He is the recipient of a Scripps Howard Foundation National Journalism Award in 1992 and a 1991-92 regional Emmy Award for commentary. He currently rides a 1987 BMW R 80 RT and a 2014 Triumph Bonneville and drives a 2010 Mazda MX-5 Miata and 2008 Ford Ranger pickup.
@https://twitter.com/ridect
Previous Manchester Harley-Davidson Announces New Ownership
Next New BDR Documentary On Northeast Premieres