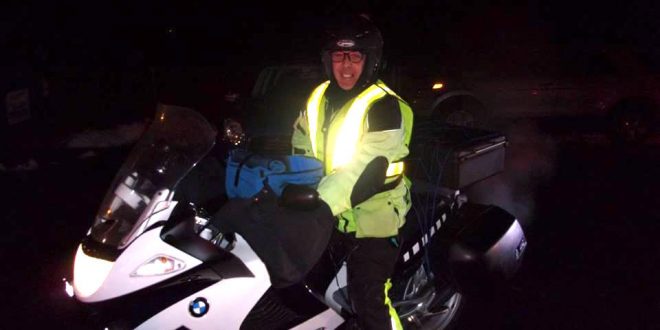 NORTH GRANBY, CT – For days after that crazy Saturday night/Sunday morning, I waited impatiently for the results of the 100th running of the Crotona Midnight Run. I continually wondered if I was disqualified for missing a checkpoint when I wandered off-route.

Checking the Ramapo Motorcycle Club’s Facebook page to see if results were posted became a ritual, as did checking the club’s website. No results. Nope, nothing yet.

The wait did enable me to reflect on the run. Everything about this ride was exciting, including the weeks of preparation. I rode at night in temperatures most would not think of. I rode on snowy roads one night with black ice when I happened upon an accident. The face of total disbelief on the firefighter directing traffic will stick with me for some time. “You must be crazy to be out here on a motorcycle,” he said before I rode away.

The excitement leading up to the actual ride was just as great as the ride itself. But not knowing if I completed the ride successfully got frustrating as the days passed. One day there was a post telling of the many pictures that had been submitted, but none of those were posted either.

If there were a counter for how many times I clicked on these pages looking for results, it would look like the odometer on my 15-year-old motorcycle, which I ride often.

Nine days and a bazillion internet clicks since the ride, my phone rang. A Ramapo official was inquiring if I was competing in the Expert or Novice class. Novice class was my reply and our conversation ended shortly thereafter but not before he said, “The results should be posted in the next day or so.”

Trying to pry but be coy at the same time, I said, “I just hope I wasn’t DQ’d.” His response? “No, you did pretty good. OK, have a good night.” I waited a couple of hours and clicked the pages. Still no results. Still no pictures.

It wasn’t until 11 days after the Crotona Midnight Run, which was postponed to the night of Jan. 20-21, that I opened Facebook for the zillionth time and saw them. I finished fourth out of 24 riders in the Novice class. Fourth! The excitement level jumped up again and I now knew with certainty what worked and what did not in my execution of the ride. Can you believe I began thinking of the next one?

I have done some big rides, long rides, even silly rides with my dogs before. I would define my Crotona Midnight Run ride as epic! Never has my energy level been so great or has a ride been such a challenge. Never have I taken so much pride in completing a ride. Next year I am going for the win!

Thanks to the Ramapo Motorcycle Club for keeping this historic event going and to all those volunteers who stood at the check points all night. I think you have more mettle than the riders!

A native of West Harrison, NY and a U.S. Marine Corps veteran, Paul Siciliano is a sidecar enthusiast and Motorcycle Safety Foundation-certified instructor for the Connecticut Rider Education Program. He currently rides a 2003 BMW K 1200 RS and a 1989 Honda Gold Wing with sidecar.
Previous Super Bowl Prediction – Football Gets Sacked
Next Massive Recall By Harley-Davidson Over Brakes