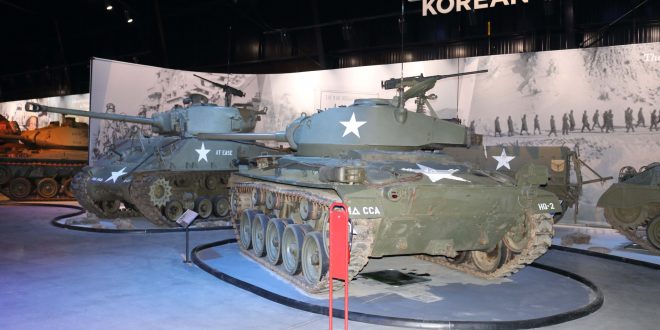 May 20, 2019 Comments Off on Destinations: American Heritage Museum

HUDSON, MASS. – It is filled with what Colin Rixon succinctly calls “the tools of war.” Inside the 65,000-square-foot American Heritage Museum are more than two-dozen tanks. There’s also a variety of other armored vehicles among the more than 90 total; a V-1 flying bomb from World War II, a Higgins boat used in the D-Day invasion, and a Scud missile and launcher from the Gulf War.

The breathtaking collection also includes a cannon from 1795, which is parked in the lobby. The museum’s collection encompasses warfare from World War I and World War II, Korea and Vietnam, on through the Gulf War and the ongoing War on Terrorism. “This was a hole in the ground two years ago,” said lead docent Rixon one recent Saturday while providing a personal tour. Planning for the museum started five years ago with most of the exhibits culled from the Jacques Littlefield collection.

While the American Heritage Museum preserves military history and serves to educate those who visit, Rixon said it has an even higher purpose. “Every family has had veterans in their family at one time or another, and those that come here and have grandfathers and fathers have served, they’re in awe of the vehicles they were in. These are the tools of war. It’s about the people and the veterans. Our mission is to remember them; to remember the veterans.”

Although it is new, the museum is already attracting visitors. Rixon said that a week after opening, a recent veteran arrived to see the actual M1A1 Abrams tank that he fought in and asked if he could get in it, something that isn’t normally allowed. “How can you say no?” Rixon said. “It made his day. When he got out of that tank, he felt very really relieved. We helped him.”

Rixon hails from Gosport in southern England. He has a military background that suits him well to be lead docent. “My father was in Normandy on tanks with the (British Army’s) 79th Armored Division. Was part of ‘Hobart’s Funnies,’ which was actually the special vehicles that were designed for the invasion. He was very much involved in that. Went ashore on Sword (Beach) as a troop commander of Crocodiles, Churchill Crocodiles, which was the flame-thrower (tank).”

Yes, the museum has a Churchill Crocodile on display, and Rixon has even contributed one of his father’s British Army uniforms from World War II. Not far away and hanging from the ceiling is a V-1 flying bomb or “doodlebug.” Rixon recalled his grandmother telling stories of the blitz. “She got bombed out three times,” he said.

Rixon’s father spent 22 years in the British Army before being discharged in 1959. Rixon joined in 1964 and served 22 years as well. He moved to the U.S. in 1990 after marrying an American.

One of the more eye-catching vehicles on display is a 12-ton German Sd.Kfz 8 “Sonderkraftfahrzueg” personnel carrier/prime mover which appeared in the motion picture “The Dirty Dozen.” Rixon said it’s not easy to drive. “It’s heavy, heavy. It has no power steering so you have to have strong shoulders. As you turn the steering wheel, it actually applies the brakes on the tracking system just like a tank. The front wheels are just like guide rollers and the tracks actually turn the beast.”

Another notable artifact is a 54-ton IS-2 Russian tank from World War II that Rixon said has a 122mm cannon and was designed to take Berlin. “It was in heavy battle because you can see there’s lot of holes in there. This was found in Holland and we took possession of this two years ago and restored it back to as you see today. We put an engine back in it and it actually drives.”

Indeed, that’s the case with most of the exhibits. “Ninety percent of what you see here all work and run and drive,” said Rixon.

The American Heritage Museum is open 10 a.m. to 5 p.m. Friday through Sunday. It’s located at 568 Main Street in Hudson. Admission is $20 for adults, $18 for seniors and active duty military, and $10 for children 12 and under. World War II vets get in for free.

Bud Wilkinson writes the "RIDE-CT" motorcycle column and the "My Ride" classic car feature in the "Republican-American" newspaper in Waterbury, CT. A graduate of Vermont Academy, he received a B.A. degree journalism from Ohio Wesleyan University in 1975. He is the recipient of a Scripps Howard Foundation National Journalism Award in 1992 and a 1991-92 regional Emmy Award for commentary. He currently rides a 1987 BMW R 80 RT and a 2014 Triumph Bonneville and drives a 2010 Mazda MX-5 Miata and 2008 Ford Ranger pickup.
@https://twitter.com/ridect
Previous Siciliano Recognized For Heads First Effort
Next New Is Old With BMW Concept R18