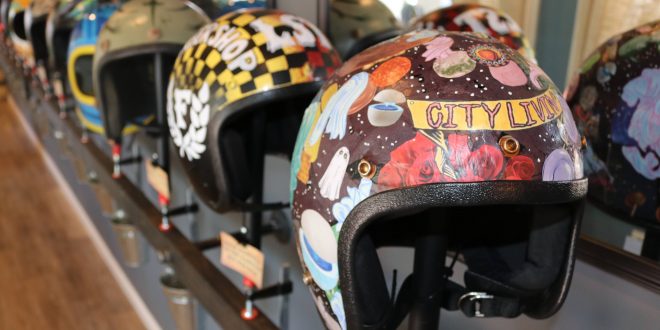 July 2, 2019 Comments Off on An Art Show Devoted To Motorcycle Helmets

WOODBRIDGE, CT – Depending on one’s viewpoint on whether tattoos are unequivocally linked to motorcyclists, it was either 23 years ago or merely two years ago that Jim LoPresti found a way to mesh his love of art and motorcycles. It was in 1996 that he began his career as a tattoo artist, but it wasn’t until 2017 that he began the Upcycle Helmet Art Show.

The third annual show was staged recently at his studio – Lucky Soul Tattoo on Route 63 in Woodbridge. There were old bikes parked outside, a food truck, a band inside, and gallery of roughly three dozen vintage motorcycle helmets that had been turned into colorful and intricate pieces of art.

“It’s about art. It’s about community. It’s about charity. And it’s about bringing people together in a tactile connection through social media and just having a good time,” said LoPresti, who warmly greeted familiar faces and welcomed newcomers as if they were old friends.

The show has its origin in requests from his tattoo customers, who sometimes inquired if he ever painted designs on helmets. While he was familiar with painting on canvas, in addition to inking skin, LoPresti figured that he’d better practice if he ever wanted to attempt airbrushing someone’s helmet. He started collecting outdated helmets that had exceeded their expiration dates.

“I got some and I started to practice on them,” he said. “I’d turn them over and go, ‘Wow, this helmet is from 1965. Who rode with this? What was happening?’ The more I collected, the more interested I got in these old helmets.”

Helmets from the 1960s and ‘70s were preferable. “Typically a motorcycle helmet has a shelf life. They’re good three to five years and then they are considered unsafe. I said, ‘God, they’re so beautiful.’ They’re sitting in an attic or sitting in someone’s basement just collecting dust, so let’s do something with these things,” he said.

LoPresti soon got the idea for the art show that has him handing out helmets to artists and letting them come up with wild or elaborate creations. The first show in 2017 was staged just a stone’s throw down the road at the New England Brewing Co. Last year, Counter Weight Brewing Co. in Hamden was the host venue.

“It’s grown significantly. I started with maybe two dozen artists that were friends. Not all tattoo artists. There were tattoo artists, fine art people, all sorts of sculptors and stuff,” he said, explaining that his tattoo studio just moved into new digs and staging the show there this year to promote the business made sense.

Any notion that the helmets displayed would be garnished with nothing but skulls and flames were instantly dispelled upon gazing at the gallery. “The art on the helmets are not limited to just the biker culture, which made me want to do it,” LoPresti said. “That’s the beauty of it. You get these odd images or something you wouldn’t expect to see on a helmet and that makes it beautiful.”

Artist Lisa Sotero of Cheshire designs cans and labels for the Stony Creek Brewery in Branford. She used clay to create her helmet entry that was a tribute to Ed “Big Daddy” Roth, the creator of the hot rod icon “Rat Fink” in the 1960s. Her helmet was a green monster with dozens of spiked teeth.

“I love Ed Roth. I love Rat Fink. And when I think of automotive or motorcycle that’s the first thing I think of, so I thought ‘How about we try doing that?’” Sotero said, reporting that it took her 58 hours to craft her helmet. “I did like four hours a day for a couple of weeks.”

Sotero said the process was “tedious. I started with the teeth. I just built it little by little by little and it kind of took on a life of its own. The eyeballs are tennis balls covered in clay.” The teeth are all oven-baked clay, while the other clay portions were air-dried.

Sotero’s helmet certainly fit the show’s parameters. “It’s taking a helmet and thinking outside of the box,” said LoPresti, who lives in North Haven and has five motorcycles, including a 1976 Honda CB750 chopper.

This year’s Upcycle Helmet Art Show had a special significance for LoPresti as money raised was earmarked for the Brain Injury Alliance of Connecticut. That’s because earlier this year his 24-year-old niece, Kaycie Brewer, was involved in a car accident and suffered a severe brain injury.

And, yes, LoPresti does wear a modern lid when riding. “I’m all about freedom of choice, but me, personally, I ride with a motorcycle helmet. Having a family and stuff, I want to protect my dome,” he said.

An award-winning print and broadcast journalist, Bud Wilkinson writes the "RIDE-CT" motorcycle column and the "My Ride" vintage car feature for the "Republican-American" newspaper in Waterbury, CT. He studied journalism at Ohio Wesleyan University where he received a B.A. degree. He currently rides a 1987 BMW R 80 RT and a 2014 Triumph Bonneville.
Previous IMS Dates Announced for 2019-2020 Tour
Next Bikes And Breakfast, Maryland Style