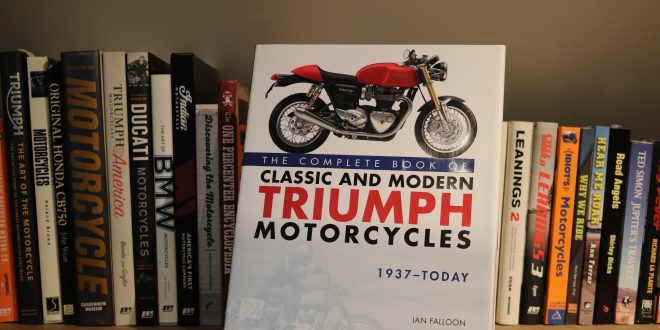 October 11, 2019 Comments Off on Bookshelf: Triumph Tome Gets Updated

A lot can happen in 4½ years. Or not very much. In the case of Triumph, the difference is 16 pages. That’s how many additional pages can be found in the newly-released, updated version of Ian Falloon’s “The Complete Book of Classic and Modern Triumph Motorcycles 1937 – Today.”

The title is a mouthful and the book is a hefty buffet for Triumph lovers, detailing the history of the iconic British brand and its many models. Formed as a bicycle company in 1885, the company began producing motorcycles in 1902.

That makes it one year younger than Indian and one year older than Harley-Davidson. (Please, don’t quibble that Indian and Triumph have had interrupted runs.)

Filled with photos and illustrations, “The Complete Book of Classic and Modern Triumph Motorcycles 1937 – Today” is a solid reference source that can answer the many questions of Triumph lovers.

My first Triumph (and first motorcycle) was a 1999 Legend, with an 885cc triple engine and five-speed gearbox. Until perusing the book’s pages, I didn’t realize that 1999 was the first year for the Legend model. It was a budget version of the Thunderbird that came out in 1995 and had an entry-level price of $7,695.

Without Falloon’s homework, I’d never have known that the Sprint ST (with a 955cc three-cylinder engine) was launched in 1999 or that the T100R weighed only 341 pounds or put out 39 horsepower.

The previous version of the book came out in May 2015. The revised version was released on Oct. 1 and includes the new Bonneville line from 2016 and though the current models.

“The Complete Book of Classic and Modern Triumph Motorcycles 1937 – Today” isn’t cheap. The cover price is $50, but it can be found online for a bit less. It’s a colorful and useful addition to any motorcycle library and, frankly, a necessity for any Triumph lover.

Bud Wilkinson writes the "RIDE-CT" motorcycle column and the "My Ride" classic car feature in the "Republican-American" newspaper in Waterbury, CT. A graduate of Vermont Academy, he received a B.A. degree journalism from Ohio Wesleyan University in 1975. He is the recipient of a Scripps Howard Foundation National Journalism Award in 1992 and a 1991-92 regional Emmy Award for commentary. He currently rides a 1987 BMW R 80 RT and a 2014 Triumph Bonneville and drives a 2010 Mazda MX-5 Miata and 2008 Ford Ranger pickup.
@https://twitter.com/ridect
Previous Greater Presence For Royal Enfield, Ural In Northeast
Next LiveWire Production Halted By Harley-Davidson