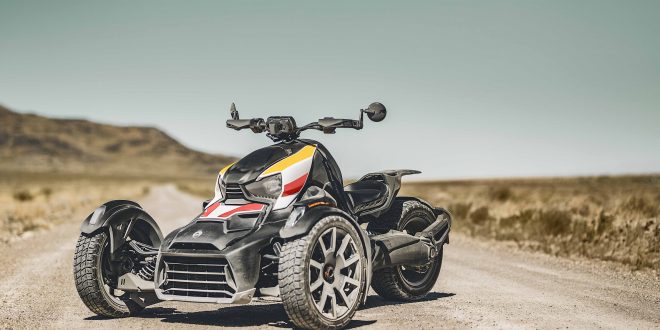 November 6, 2018 Comments Off on Can-Am Seeks To Revive Sagging Three-Wheeler Market With Ryker

HARWINTON, CT – Depending on one’s perspective, they’re either odd or exotic. To many motorcyclists, three-wheelers such as Can-Am’s Spyder and Polaris’ Slingshot that don’t conform to the traditional trike layout of one wheel in front and two in the rear

can’t be mentioned in the same breath as a motorcycle. That’s because they neither look nor operate like a motorcycle.

Both the Spyder and the Slingshot have two wheels in front and one propulsion wheel aft. The Spyder has a seat that the rider throws a leg over and sits on. The Slingshot has a cockpit with side-by-side bucket seats, a shifter in-between and a steering wheel. The two lines (with various models) have occupied a new niche in the power sports arena over the past decade. They’re for those who seek something different or who are unable, unwilling or incapable of riding a motorcycle, but still desire the enjoyment of being in the wind.

But Can-Am and Polaris have hit a wall when it comes to consumer demand. Either every first-adopter of a Spyder or Slingshot has bought one or they’re too high-priced and too narrow in appeal to experience further sales growth.

I first rode a Spyder in 2008 when it was introduced and found it to be more like a snowmobile than a motorcycle. I wrote at the time that it was “a comfortable and eye-catching ride.” As a rider, though, I found it lacked the same vibe and connection as being on two wheels.

The Spyder quickly caught on, though. Bob Tiso of Land ’N Sea Powersports, the Can-Am dealer in Waterbury, CT recalls that he sold 30-plus a year over the first few years – despite a bad economy. “It started tanking in ’13,” he said, reporting that he’s now selling only about a half-dozen a year.

Part of the reason is price. MSRPs for 2019 models range from $15,999 to nearly $30,000. Another reason for the drop in sales from Tiso’s perspective is that Can-Am “got greedy” and cut back on its demo program and on promoting the product. “They know they have a problem,” he said.

Can-Am reacted in September by announcing a new three-wheeled line dubbed Ryker; essentially a more basic and less costly version of the Spyder with smaller engines and less fuel capacity. A single saddle replaces a bench seat, although a passenger seat option exists. There’s also less storage space. Other changes include a shaft drive instead of a belt and a twist-and-go CVT transmission as opposed to manual shifting.

Yes, the tab for a Ryker can quickly escalate when options are added, but a Ryker is certainly more accessible for the less affluent and for younger customers. Can-Am says there “are more than 75,000 customization combinations (for) both visual and functional accessories” for Ryker models.

It wasn’t until June 2014 that I first drove in the Slingshot. I wrote then, “Cops waved. Pedestrians stared. Other drivers did double-takes.” I concluded, “The Slingshot is unquestionably a novelty vehicle designed solely for fun, and it certainly delivers.”

Yet it, too, has seen its sales peak and decline, a fact Polaris acknowledges. Scott Wine, chairman and CEO of Polaris, recently told financial analysts following the issuance of third quarter earnings that “…we do not expect to return to growth until mid-2019 for Slingshot.” Wine added, “We are, obviously, not pleased with the way Slingshot has gone in the last couple of years. We’ve got a lot of work being done to refine the product to make it better for consumers.”

Price is a problem here as well with the MSRP for 2019 models ranging from $19,999 to $29,499. Without providing details, Wine said, “…we do have some really good innovation coming with the Slingshot product next year.”

George Libby of LIbby’s Motoworld, the Slingshot dealer in New Haven, has experienced a similar sales trend with Slingshot that Tiso has with the Spyder. “The first year we did like 60 or more,” Libby said, reporting that sales have since dipped to roughly 25 a year.

Part of the reason, he said, is because of bad publicity involving recalls. “We’re still doing quite well,” he said. “I push them a lot. You’ve got to get people to road test.” Libby does worry about the line’s price in the future. “They can’t go up any higher than they are now if they want to keep on selling them,” he said. Libby revealed that Polaris plans to add an automatic transmission with a new motor in the near future.

It’s Can-Am that may be on to something with its Ryker offerings. The company sees a huge growth opportunity. Believe it or not, the company says the average Spyder buyer is 62 years old, with a disposable income and time to ride. There are lots of female buyers, too.

The Ryker purchaser is guaranteed to be younger. The Ryker’s styling fits a younger profile. It’s sportier and meaner; capable of navigating urban corridors along with country back roads. The ability to personalize it and still stay within a budget will certainly help sales. Give Can-Am credit for examining the marketplace and reacting, and for raising the possibility that one of these outré machines will revive a slipping niche.

(Originally published in the “Republican-American” on Nov. 3, 2018)

(Photos courtesy of Can-Am and Polaris)