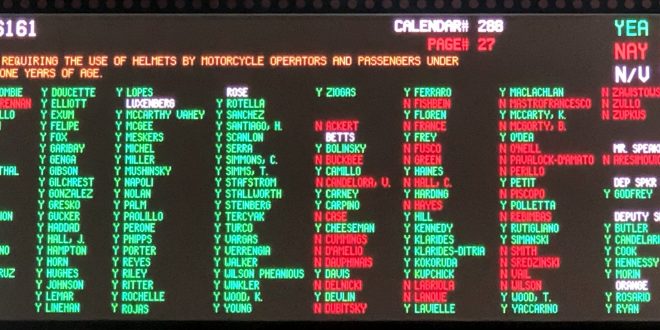 May 15, 2019 Comments Off on CT Bill To Raise Helmet Requirement Advances

HARTFORD – A bill that would require all motorcycle riders under 21 years of age to wear a helmet in Connecticut passed in the House of Representatives in a 113-33 vote on Tuesday evening.

The helmet bill now goes to the Senate. Current law requires riders under 18 to wear a helmet.

An item in another bill that would have required all riders to wear a helmet failed to make it out of the Transportation Committee earlier in the session, despite a strong push from health and safety advocates who say that helmets save lives.

In a press release put out by the General Assembly, Rep. Michelle Cook (D-Torrington) said, “Our current laws don’t do enough to protect motorcycle operators who may not have enough experience to navigate roadways they share with distracted drivers.

“For some, a helmet can be the difference between life and death after one slip on a patch of sand, gravel, or other obstacle.  Helmet laws work to protect operators from life threatening injuries and brain damage, and I am pleased my colleagues recognize this necessity.”

Cook is Deputy Speaker of the House. She introduced the bill (H.B. 6161) after a 19-year-old constituent reached out to her.

“I reached out to Rep. Cook last fall after the Northwest Corner of Connecticut lost what felt like a number of young lives, including some of my friends,” said Taylor Wheeler, a student at the University of Connecticut and Torrington resident.

“I was shocked to learn a number of young people are injured or lose their lives in accidents each year.  It does not feel fair to lose friends at this age, especially to incidents where extra reinforcement may have helped.”

The press release noted, “Between 2015 and January 2019, fatal motorcycle crashes accounted for an estimated 17 percent of all fatal motor vehicle crashes, according to the University of Connecticut’s Connecticut Crash Data Repository.  In 2015, the State Department of Transportation found that over half of victims killed or seriously injured in motorcycle crashes were not wearing a helmet.

“Motorcycle operators are particularly vulnerable to severe and fatal injury because they lack the protection an enclosed vehicle provides, and helmets are 37 percent effective in preventing motorcycle deaths, and 67 percent in preventing brain injury.”

An award-winning print and broadcast journalist, Bud Wilkinson writes the "RIDE-CT" motorcycle column and the "My Ride" vintage car feature for the "Republican-American" newspaper in Waterbury, CT. He studied journalism at Ohio Wesleyan University where he received a B.A. degree. He currently rides a 1987 BMW R 80 RT and a 2014 Triumph Bonneville.
Previous TSI Harley-Davidson Getting New Ownership
Next Test Ride: Royal Enfield’s 650 Twins