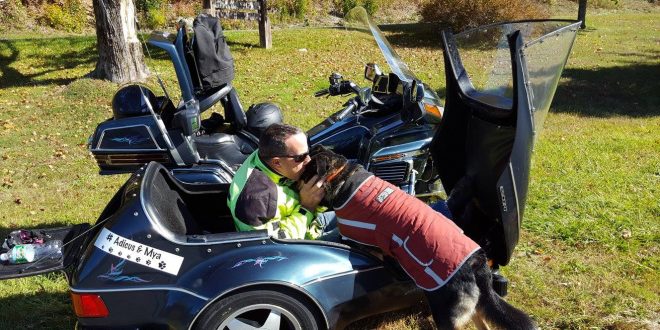 Always Riding: Dogs In The Sidecar

September 13, 2017 Comments Off on Always Riding: Dogs In The Sidecar

NORTH GRANBY, CT – As the weather cools and the leaves start doing their thing, I have discovered that I also do “a thing.”

My thing would be riding with my beloved Emily as pillion and our dogs in the sidecar. A lot. Emily joins the ride quite often but as the weather cools I have realized the four of us go almost everywhere in that rig. The time of the year just seems to dictate going everywhere on a motorcycle.

If you live in northwestern Connecticut chances are you have seen us riding about. Besides the joy of doing what I love with my pack, it is even better seeing the smiles people give as we go by. Half of the year there is never a destination, rather it’s about time. How much time do we have to go ride?

But as fall starts to show itself on the horizon I am finding we incorporate destinations now. The grocery stores, fuel stops and places like hardware stores just become more like fun and less of a chore on a bike. They certainly take a bit longer the way we do it because we always make friends due to our furry children who join us. 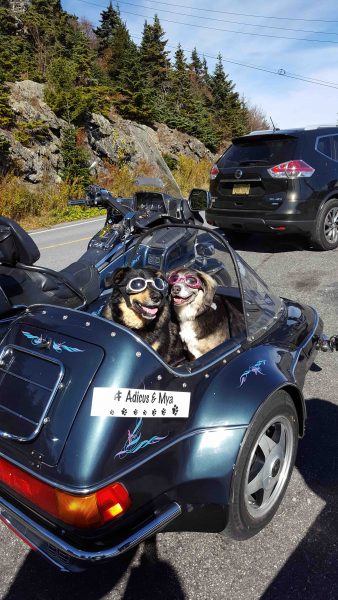 Put Adicus and Mya in a motorcycle sidecar with goggles on and you would be surprised who comes up to you to chat. The shy come out of their shell and the unsociable become sociable really quickly.

Now that the temperature permits it, I can leave the dogs in the sidecar while I run in someplace like a food stop and it is quite common to watch the crowd gather around them and take pictures like they are celebrities or something.

Adicus and Mya do have their own Facebook page but I often wonder how many pictures of them are on others’ social media outlets and the internet. I’ll wager to say that number is in the thousands. I have a business card I pass out with their page address and even my cell phone number on it when people take the time to talk with us, but it seems those pictures never make it to their page or to my phone. It doesn’t stop me from handing them out though. It like part of the “us” experience. 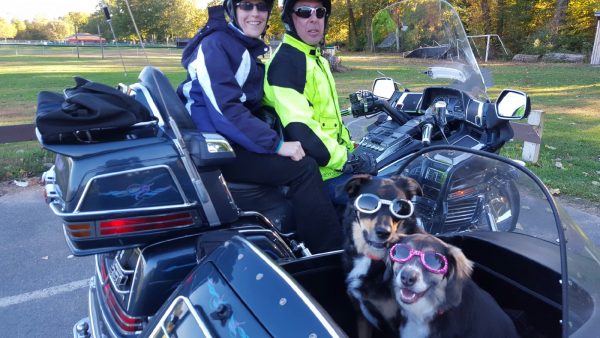 The real fun begins soon as the Holidays approach. Around Halloween, Adicus and Mya get some accessories added to their riding attire. Sometimes the rig itself gets a little decoration too. You would not believe how much less driver aggression occurs around us when someone notices these guys by my/our side in that sidecar. The sidecar itself draws attention. It is almost nostalgic and sometimes I see older people point us out as we approach and once they see the dogs goggled up it turns into a gut laugh.

If I were to confess where the real fun is, it would be when we pull up next to a school bus at a light. I have seen a bus literally tilt from all the kids leaning out the windows taking pictures. I always laugh when I hear the bus driver shout them back to their seats. 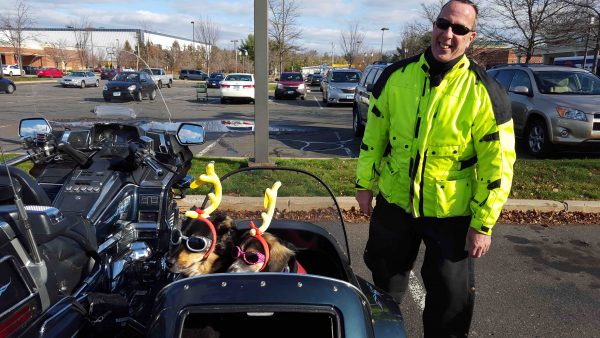 After Halloween comes Christmas. The bike gets lights and the fur babies have a little Christmas flare. We ride around to the Christmas tree farms and steal Santa’s thunder. Hot cider, donuts, and dogs on motorcycles. How can he compete?

For years now I have a tradition where I pick up our Christmas tree on a motorcycle. Some years I have done it on two wheels but lately it has been on three and with the dogs. This year I may have to do something different and decorate the bike trailer. I am open for suggestions if you have any.

If you are ever out and come across us on the roads, please say “Hi.” We would love to meet you and take our picture with you.

Watch for motorcycles! And keep a lookout for dogs in the sidecar, too! 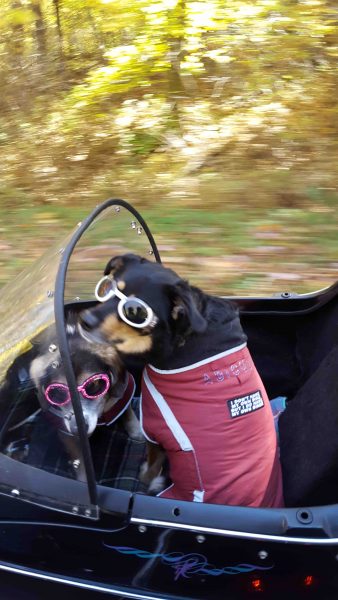 A native of West Harrison, NY and a U.S. Marine Corps veteran, Paul Siciliano is a sidecar enthusiast and Motorcycle Safety Foundation-certified instructor for the Connecticut Rider Education Program. He currently rides a 2003 BMW K 1200 RS and a 1989 Honda Gold Wing with sidecar.
Previous Eats: Pastries And More At Huntington Country Store
Next Doc’s Motorcycle Parts Custom And Vintage Show