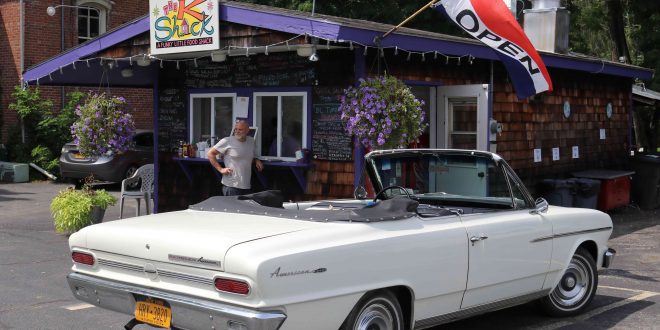 Eats: The K Shack Lives Up To Funky Name

NEW LEBANON, NY – It doesn’t have a tin roof, rusted or otherwise, but the The K Shack is a funky little shack that has been serving up shrimp tacos, pulled pork and other roadside fare for slightly more than six weeks, having opened on July 4.

Owner Kelly Hagan launched the joint in what was a long-defunct BBQ stand on Route 20, just east of the intersection with Route 22. It’s tucked behind the town library and offers a casual atmosphere and outdoor-only seating at picnic tables as a group of riders discovered this afternoon.

David’s Melon Farm in Pittsfield, MA provides the sweet cantaloupes that are used to make the fresh fruit salsa for the shrimp tacos. A riding companion raved about her taco ($6.50) calling it “spicy, citrusy, bold, tangy and fresh.”

Another riding companion had equally good things to say about the taste of his hefty bacon, lettuce and turkey sandwich ($12). I opted for a K-Dawg ($6.50) with cheddar, and it was large, moist and flavorful, much better than any ballpark variety.

Hagan and her staff were attentive, with Hagan inquiring about our bikes. She’s a rider herself and an instructor.

The menu at The K Shack is fluid with daily specials and seasonal offerings, so there might be a surprise or two when you arrive. Hagen says the stand will shutter for the season when cold weather arrives.

The K Shack is open 11 a.m. to 8 p.m. Tuesday through Sunday, and closed Monday.

The K Shack does not have a bathroom, but the library is footsteps away and has both a men’s and women’s room. I suggested to the librarian that a donation cup be placed in each for interlopers like myself, but the idea didn’t get much positive reaction.

With a bit of success, maybe Hagan can donate to the library. Or at least keep the staff fed as a courtesy.

Bud Wilkinson writes the "RIDE-CT" motorcycle column and the "My Ride" classic car feature in the "Republican-American" newspaper in Waterbury, CT. A graduate of Vermont Academy, he received a B.A. degree journalism from Ohio Wesleyan University in 1975. He is the recipient of a Scripps Howard Foundation National Journalism Award in 1992 and a 1991-92 regional Emmy Award for commentary. He currently rides a 1987 BMW R 80 RT and a 2014 Triumph Bonneville and drives a 2010 Mazda MX-5 Miata and 2008 Ford Ranger pickup.
@https://twitter.com/ridect
Previous More Cases of Owners Being Overcharged On Property Taxes
Next Video: Split’n Lanes Dodgin’ Gutters Show In Brooklyn