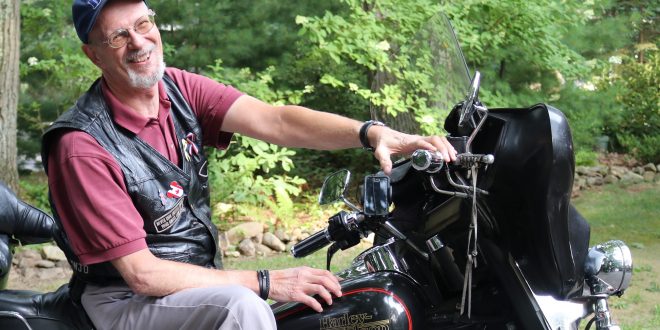 More Cases of Owners Being Overcharged On Property Taxes

PROSPECT, CT – Al Betts of Prospect rides a remarkable 30-year-old survivor. It’s a 1989 Harley-Davidson FLHTC, an Electra Glide Classic model that he bought new. Its black paint is faded and cracked, the seat is ripped, and the engine and transmission have been rebuilt. As of last Tuesday evening, the well-worn motorcycle had 163,562 miles on its odometer.

“It shows its age. It shows its mileage,” said Betts as he chatted while seated at a patio table behind his home. His bike is an enduring example of Harley-Davidson’s revival following the “AMF years” (1969 -1981) when American Machine and Foundry bought the company, slashed quality and nearly drove it into bankruptcy.

The Electra Glide Classic is darn near original. “I put a different exhaust on it when the exhaust rotted out,” Betts recalled when asked what parts on the motorcycle didn’t come from the factory.

Like other vehicle owners in the state, Betts paid his property taxes last month. The Harley-Davidson was assessed for $5,290, more than 10 times what state law says the motorcycle should be assessed for and more than three times what it’s probably worth. He paid $163.73 and didn’t think about it until he learned from RIDE-CT that he’d been overcharged by his town.

In case you missed the last column on this subject two weeks ago, it reported how state law says that any vintage motor vehicle  – motorcycle or car – “shall not be assessed for more than $500.” Vehicles bearing classic license plates automatically get the $500 assessment, but owners with other style plates must seek an adjustment from their assessor.

State law also states that owners “may be required by their assessors to provide reasonable documentation that such motor vehicle is an antique, rare or special interest motor vehicle.” It further defines such vehicles as “a motor vehicle twenty years or older which is being preserved because of historic interest and which is not altered or modified from the original manufacturer’s specifications.”

The state Department of Motor Vehicles provides assessors with vehicle values (as compiled by the Office of Policy and Management), and the law then seemingly gives accessors unlimited latitude in making adjustments. Some are acting as if they’ve been incentivized to be aggressively obstructionist, making one wonder if their actions are based on apathy, ignorance, greed or whim, not fact.

Remember, the law says assessors “may” require documentation. It doesn’t say they must.

The column two weeks ago was written after my own property tax bill showed a highly inflated assessment for my stock 1987 BMW R 80 RT. I got it instantly reduced from $6,300 to the legal $500 limit – and the tax owed cut from $176.40 to $14 – just by politely asking at the Harwinton assessor’s office that a change be made.

Betts said he attempted to do likewise in Prospect but was rebuffed by his assessor. “He says it’s out of the question. He says everybody thinks if it’s 20 years old, it’s automatically a $500 assessment,” he said.

Betts said his assessment was trimmed to $3,700, which will result in a small rebate. However, that figure is still far above the bike’s value given its “fair” shape and high mileage. An online check of NADA book value pegs the model at $1,385 in fair shape, so Betts is being overcharged.

Betts later added that Prospect’s assessor was “completely disinterested” in walking to the parking lot to actually examine his bike when he visited. While he doesn’t plan to sell it, he said, “I’d be happy to get $1,500 for it. It just doesn’t have a lot of value.”

Betts did get an affidavit form that the assessor requires owners submit to more formally request a $500 assessment. He now plans to take his bike to Doc’s Motorcycle Parts in Waterbury, which has serviced it, and secure an expert opinion in writing that the bike unequivocally qualifies for the $500 assessment. He’s refusing to give up.

Other Cases Of Excessive Taxes

Betts isn’t alone in having to follow assessor dictates based on the ridiculous “fine print” in state statutes – fine print that the DMV doesn’t follow. If any vehicle with a classic plate automatically gets a $500 assessment with no qualification required, shouldn’t all old roadworthy vehicles? Is all this a device for the DMV to get owners to fork over $96 for classic plates? Or is it a calculated, duplicitous money-grab by assessors.

And what does “altered or modified” mean? Does it mean whatever an assessor arbitrarily interprets it to mean? Does changing the color qualify? What about adding a more comfortable seat? None of these items are ever listed in “manufacturer’s specifications.” This lack of specificity creates confusion, and wiggle room for accessors.

The purpose behind the original column was to alert classic vehicle owners to the $500 assessment limit. I wondered then how many towns are purposely overcharging uninformed vehicle owners through overstated assessments. I only noticed the exaggerated assessment on my BMW because it was more than double the bike’s actual NADA value.

Not surprisingly, response to that column was immediate. Some taxpaying readers were outraged that they were paying too much. Others were grateful to learn about the law and vowed to confront their local assessors.

Buzz Ebner of Harwinton owns a bunch of classic cars. Four are stored in Washington, including a 1998 Jaguar XK8 and a 1996 Mercedes Benz SL500. His tax bill had them assessed for a total of $13,620, instead of $2,000. RIDE-CT joined Ebner when he went to the assessor’s office in Washington seeking relief. He was given a form to fill out and was told that a mechanic must verify the vehicle’s status and sign the form. Once he does so, Ebner can get a refund of $165.56.

Another person who got instant satisfaction from Harwinton’s assessor’s office was Rich Hastings. He owns a 1969 Triumph TR6C Trophy and a 1981 Honda GL1100 Gold Wing, each originally assessed for $750. He went to town hall, requested and received the $500 maximum assessment, and the promise of a $12 refund on the tax bill that he had already paid.

The last column ended with a question: How many other victims are there across the state? That question stands.

How many thousands of “overcharge” dollars are towns receiving from unsuspecting taxpayers?

And, why does the law say assessors “may” require “reasonable documentation” that a vehicle is actually old or original?

In the case of most motorcycles, they are being preserved and ridden solely because, for their owners, they capture the thrill and imagery of yesteryear.

(A version of the column originally appeared in the “Republican-American” on Aug. 10, 2019.)

An award-winning print and broadcast journalist, Bud Wilkinson writes the "RIDE-CT" motorcycle column and the "My Ride" vintage car feature for the "Republican-American" newspaper in Waterbury, CT. He studied journalism at Ohio Wesleyan University where he received a B.A. degree. He currently rides a 1987 BMW R 80 RT and a 2014 Triumph Bonneville.
Previous Connecticut Rider Starts Rainbow Riding Club
Next Eats: The K Shack Lives Up To Funky Name