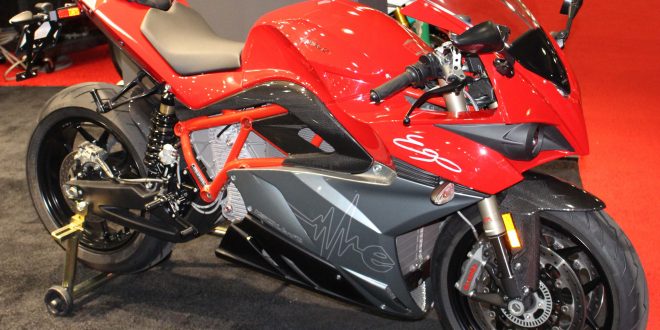 January 6, 2019 Comments Off on Energica Plugs Into Hudson Valley Motorcycles

OSSINING, NY – Energica, the high-performance electric motorcycle brand from Italy, has signed a new dealer in the northeast and its ninth in the United States, RIDE-CT & RIDE-NewEngland has learned.

Hudson Valley Motorcycles expects to have models in its showroom on Route 9 here soon.

An official announcement from Energica may not come until Tuesday, but the company is known to view New York as an electric vehicle-friendly state. According to Plug-In America, New York ranks second in EV sales, second in EV registrations and fourth in EV charging stations.

Hudson Valley Motorsports has been aggressive in adopting electric motorcycles. It previously sold off-road models from Alta Motors, a California company which shut down last year. “It’s a sad situation. They obviously ran out of money,” Alexander said of Alta.

But the dealership’s affinity for electric helped it snag Energica. “They like what we did with that brand (Alta),” he said, adding that he’s optimistic about Energica’s potential. “They have deep pockets. They’re not going anywhere.”

Energica’s website only lists the range of the Eva EsseEsse9, which it puts at 93 miles combined.

“Shifting can suck, especially if you live in an urban area,” he said, noting that “the charging technology is good” on Energica models.

Range is nonetheless an issue for electric manufacturers and for longterm success “they have to get the battery length longer. I do believe the electric industry will continue to grow. We’re excited about it,” Alexander said.

Eergica Motor Company is based in Modena, Italy and is a subsidiary of CRP Group, which began developing electric racing motorcycles in 2009. The development of street models, which resulted in the Energica brand, began two years later.

The family-run Hudson Valley Motorcycles has been in business for more than 45 years.

An open house at Hudson Valley Motorcycles to introduce the Energica line is expected to be held in late January.

Bud Wilkinson writes the "RIDE-CT" motorcycle column and the "My Ride" classic car feature in the "Republican-American" newspaper in Waterbury, CT. A graduate of Vermont Academy, he received a B.A. degree journalism from Ohio Wesleyan University in 1975. He is the recipient of a Scripps Howard Foundation National Journalism Award in 1992 and a 1991-92 regional Emmy Award for commentary. He currently rides a 1987 BMW R 80 RT and a 2014 Triumph Bonneville and drives a 2010 Mazda MX-5 Miata and 2008 Ford Ranger pickup.
@https://twitter.com/ridect
Previous It Had Better Not Snow On January 19…
Next LiveWire Will Shockingly Cost Nearly $30,000