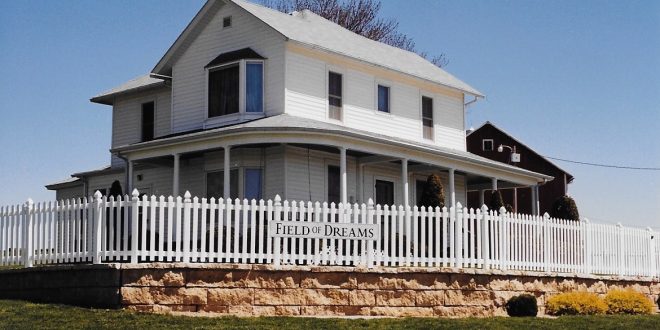 “Field of Dreams” Is A Memorable Place

August 8, 2019 Comments Off on “Field of Dreams” Is A Memorable Place

It is one of my fondest baseball memories, and now Aaron Judge is going to walk in my footsteps and stand in a batter’s box where I once took some cuts. As Mel Allen would have said, “How about that!”

It was 20 years ago that I visited friend Tom Teuber in Madison, WI to keep up a ritual of checking out old MLB ballparks, usually in their final year before replacement. I know the year was 1999 because Milwaukee’s County Stadium was supposed to close at season’s end – until a crane collapsed at the new Miller Park, killing three construction workers and causing sufficient damage to delay the adjacent stadium’s opening until 2000.

Madison is only a couple hours northeast of Dyersville, IA, where the much-loved 1989 baseball movie “Field of Dreams” was shot. Seeing the Iowa cornfield that Kevin Costner’s character of Ray Kinsella built and ended up playing catch on with his dad was a highly anticipated side trip.

Like so many other grown men, I shed tears upon first seeing the motion picture’s ending, and still do every time it pops up on TV.

It was a warm, sunny spring morning when Tom and I drove in the driveway at the Field of Dreams. The ball field looked just as it did in the movie and so did the big white farm house, but beyond the outfield were sprawling brown fields filled with nubs of stalks from the previous year’s crop, not a ripening crop of corn for ghosts of old ballplayers to walk out of and play games.

I’d brought my Wilson A2000 glove and Tom had brought his mitt as well. We were the first fans to arrive. After checking out the setting, we proceeded to the diamond and played catch; me on the pitcher’s mound and Tom behind home plate.

Other fans soon began arriving, enough for everyone to take cuts at the plate. As I recall, we  took turns throwing BP and fielding fungos in the outfield.

At one point, I walked over to a line of tall pine trees near the house and stretched out on the grass. The only sounds were the quiet whoosh of the wind, the buzzing of bees and the sounds of baseball in the background – bats striking balls and balls slapping leather.

With eyes closed, I recalled the many nights of playing catch with my own dad as a kid, and got misty-eyed. With eyes open, I tried to picture the ghostly players from the movie.

It was Iowa. It was heaven. It was memorable. It was perfect.

The experience came back to me this morning when it was announced that the New York Yankees and Chicago White Sox will play an actual regular season game at the Field of Dreams on Aug. 13, 2020.

Seating for 8,000 will be installed and Fox will televise the game live.

Costner better be tapped to throw out the first pitch.

Bud Wilkinson writes the "RIDE-CT" motorcycle column and the "My Ride" classic car feature in the "Republican-American" newspaper in Waterbury, CT. A graduate of Vermont Academy, he received a B.A. degree journalism from Ohio Wesleyan University in 1975. He is the recipient of a Scripps Howard Foundation National Journalism Award in 1992 and a 1991-92 regional Emmy Award for commentary. He currently rides a 1987 BMW R 80 RT and a 2014 Triumph Bonneville and drives a 2010 Mazda MX-5 Miata and 2008 Ford Ranger pickup.
@https://twitter.com/ridect
Previous The Week In Review – Accidents, New Model Info
Next Test Ride: Moto Guzzi V85 TT