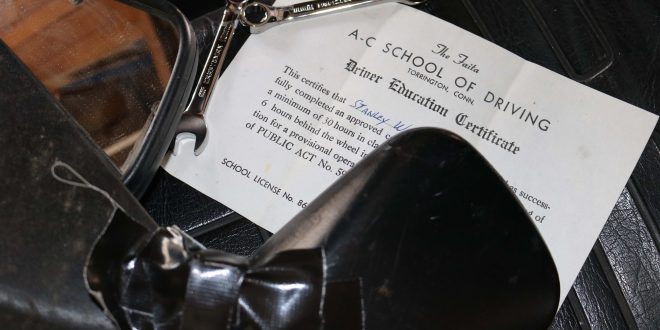 HARWINTON, CT – It was while going through a plastic storage container stuffed with miscellaneous old papers recently that I discovered a diploma issued nearly 50 years ago when I was 16.

The “Driver Education Certificate” from The Faita A-C School of Driving in Torrington was dated July 1, 1970 and signed by proprietor Frank J. Faita. It certified that student #139276 completed “an approved course in driver education” consisting of 30 hours of classroom instruction and a minimum of six hours of behind the wheel instruction.

The certificate also informed that I was “entitled to make application for a provisional operator’s license in accordance with provisions of PUBLIC ACT No. 599 of 1957.”

My first thought was “Have I really held a driver’s license for 50 years?”

I’d actually been introduced to driving much earlier by my father. I was probably 12 when I first got behind the wheel, because I can recall learning to shift my mom’s 1956 Chevrolet station wagon, and it got replaced by a new 1966 Ford Mustang.

The Chevy was huge, green and white, with a drop-down tail gate, and a gas filler hidden behind a tail light. As I youngster, I’d barfed on the car’s dashboard. The vomit had seeped inside. For the longest time, whenever the heater was the turned on, the interior of the car filled with an awful smell. Rust eventually took its toll on the wagon. My parents sold it to a service station owner for $50 before getting the Mustang.

We lived a mile down a dead end road, enabling me (with dad’s guidance) to get my first taste of driving on the Chevy. I learned how to use a clutch and a manual “three on the tree” transmission. At that time, the final portion of the road was one lane and dirt. Traffic was nil and so was the possibility of anything bad happening.

Consequently, when I enrolled in driving school, I wasn’t totally green. Mr. Faita was the go-to guy at the time and I don’t remember the experience being intimidating. What I remember more was having a crush on a fellow student. She was from Litchfield and her family owned a Torrington bank.

Maybe my parents had lofty ideas of a future family merger, but I just thought she was extremely cute. I was even invited to visit her at her house once. My parents made me dress up in a jacket and tie, so I felt like a dork.

It Took Decades Before Motorcycles Arrived

It wasn’t until 34 years later – in the fall of 2004 at age 51 – that I went back to class to get my “M” endorsement on my driver’s license to legally operate a motorcycle. The state’s course was much more difficult and stressful. It produced a small wallet-sized card acknowledging successful completion.

Since then, there’s always been a motorcycle, or two, or three, in the garage. A total of 14 used bikes at least have come over the past 16 years, and 12 have gone. There have been four BMWs, four Triumphs, two Yamahas, a Harley-Davidson, a Honda, a Moto Guzzi, and a Suzuki. Somehow I’ve escaped buying a Ducati, Indian or Kawasaki, and have never bought a new bike.

While the driver education certificate got me wondering where the years have gone, a passage in Bill Bryson’s humorous book “The Road to Little Dribbling” loaned to me by a friend and just completed made me wonder if perhaps I wasn’t farther along the downhill road to the crematorium than I realized or my current age suggested.

“One of the great pleasures of dotage is the realization that you have pretty much everything you need. Apart from a few perishable essentials like lightbulbs, batteries and food,” Bryson wrote. “I need almost nothing.”

It was at that moment that I calculated that an unusually long 18 months had passed since I had last bought or sold a motorcycle, or purchased anything else of consequence, except for work necessities. Bryson really nailed it. When you get older, your needs and wants diminish significantly.

Urge To Buy Is Waning

During those 18 months, I have purchased a new brighter lightbulb and a new battery for my 1987 BMW R 80 RT. I’ve also added like-new mirrors found on eBay for either side of the fairing. The right-side mirror on the Beemer had been damaged before I got it and was unusable. BMW’s replacement price was $137 plus tax. I found a barely used one in California for $41, then decided to buy its mate for the same price.

The only other motorcycle-related purchases during that time have been some stock pea-shooter exhaust pipes to replace the loud aftermarket silencers that were on my 2014 Triumph Bonneville when I bought it and two 10 mm open end wrenches after being unable to find the one I already owned when I went to install the mirrors.

Since taking up riding 15½ years ago, the down time of most winters has been spent searching online for the next two-wheeled trophy. Maybe because of my stampeding age, but I really haven’t done much looking the past few months. There’s no urgency to put another bike in the garage.

There is a contentment, though, in being satisfied with “what is.” A new lightbulb, a new battery, two replacement mirrors, a quieter exhaust system, two 10 mm wrenches and all is well. Spring will arrive soon. The bikes are relatively ready to roll. Maybe the driver education certificate can finally be discarded, but never the memory of that cute girl in driver’s ed class. Can I still say that in today’s reactive climate?

(This column was originally published in the “Republican-American” newspaper on March 7, 2020.)

Hello! If you enjoyed this column, please click on one of the social media buttons below and share it.

An award-winning print and broadcast journalist, Bud Wilkinson writes the "RIDE-CT" motorcycle column and the "My Ride" vintage car feature for the "Republican-American" newspaper in Waterbury, CT. He studied journalism at Ohio Wesleyan University where he received a B.A. degree. He currently rides a 1987 BMW R 80 RT and a 2014 Triumph Bonneville.
Previous TWIR (March 7) – Indian, BMW And Royal Enfield News
Next Mark’s Expo Canceled Because of Coronavirus