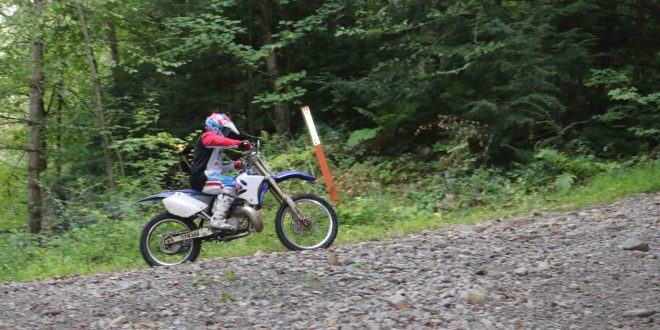 September 10, 2019 Comments Off on Greenway Compromise Possible At Thomaston Dam

THOMASTON, CT – Nothing’s settled. No decision has been made on the route that the Naugatuck Valley Greenway will take from the Torrington line southward to the Thomaston Dam, but recent discussions involving planners and concerned parties have apparently come up with a possible solution that may allow the riding trails and greenway to coexist.

More importantly, it will allow riders and other outdoorsy types to coexist.

Again, the emphasis is on may.

Details of what the solution might be haven’t been revealed publicly, and won’t be until later this month, but presumably involves a routing compromise or redesign/adaptation of proposed routes on both the east and west sides of the Naugatuck River that have previously been made public.

“I think we have a good understanding of a viable route,” Aaron Budris told RIDE-CT & RIDE-NewEngland. Budris is senior regional planner for the Naugatuck Valley Council of Governments in Waterbury, which is researching and coordinating the routing of the NVG.

Recalling the contentious informational public meeting held in Thomaston in late February, where more than 150 vocal off-road riders expressed their opposition to the greenway, Budris said, “The meeting was very productive. We really tried to address the concerns that we heard.”

The dirt riders have history behind them in expressing their concern about the project. Land behind the dam has been available to riders since 1975. A 13-mile loop on the west side of the Naugatuck River stretches north from just behind the dam to approximately three-quarters of a mile north of the Campville Road bridge below Exit 41 on Route 8 in Litchfield.

As many as 40,000 riders use the trails annually and it’s the only riding area in the state open to the public. While hikers, bicyclists and other recreational users are not barred from the area currently, it is relatively remote location and not easily accessible. Consequently, motorcycle riders have had the land largely to themselves for decades.

Speaking in opposition to the greenway at the February meeting was Tony Gasper, president of the New England Trail Rider Association. He told planners that it was “not practical or safe for us to share” and that a greenway route on the west side of the Naugatuck River “would cripple the trail system.”

However, after attending a meeting in early August involving planners and others, Gasper offered a more resigned assessment of the situation.

He added, though, that “a decent compromise was reached,” later reiterating that “when the compromise was presented, I repeatedly stated and reenforced that the status quo is our preference and recommendation.”

What that compromise is remains the big secret, but it is suggestive of a new or adjusted routing plan that minimizes the impact on riders.

Budris said a steering committee meeting is set for Sept. 24 involving the four towns along this section of the greenway – Torrington, Harwinton, Litchfield and Thomaston – as well as the U.S. Army Corps of Engineers, NETRA, the Railroad Museum of New England, the Northwest Hills Council of Governments and the Naugatuck Valley Council of Governments.

The U.S. Army Corps of Engineers owns the property directly behind the dam, stretching north to the Harwinton and Litchfield town lines, and oversees the trails. The railroad museum operates trains on tracks that run through the Corps’ property and extend up to Torrington.

“We’ll be going over all the route options and making recommendations,” said Budris of the upcoming meeting. “It’s really going to be up to the steering committee to select the preferred route option.”

Budris sounded optimistic that the secret solution will be favored once the committee convenes to consider options. “We envision it being collaborative. Hopefully, we can all come to a consensus,” he said, explaining that once a route is chosen, a formal report will be issued and the public will be invited to comment.

Regardless of the route selected, it is the responsibility of the towns along the greenway route to build and maintain their portions of the recreational amenity. For towns like Harwinton and Litchfield, which already have ample recreational options, there’s little incentive to build the greenway.

Not only is there an upfront cost, although grants could help cover the tab, but there’s the longterm cost to the towns. The economic benefits would seemingly be negligible as the town centers of Harwinton and Litchfield are far away, and the costs for maintenance in perpetuity and damage repair following flooding would have to be funded somehow.

While trail riders cannot yet stop worrying about the future of their riding refuge behind the Thomaston Dam, they can perhaps dial back their concern. Their outrage back in February, determined leadership advocating on their behalf, and planners willing to listen and adjust may soon save the trail system or prevent it from being dramatically altered.

Again, at least until Sept. 24, the emphasis is on may.

An award-winning print and broadcast journalist, Bud Wilkinson writes the "RIDE-CT" motorcycle column and the "My Ride" vintage car feature for the "Republican-American" newspaper in Waterbury, CT. He studied journalism at Ohio Wesleyan University where he received a B.A. degree. He currently rides a 1987 BMW R 80 RT and a 2014 Triumph Bonneville.
Previous “Christmas Special” At Washington Car-B-Que
Next Safe Riding: Tip For Novices – Don’t Get Complacent