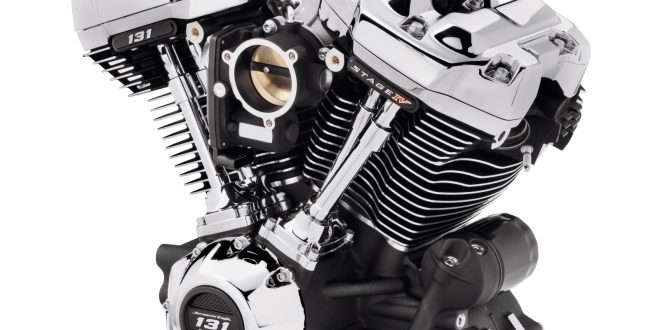 MILWAUKEE – Harley-Davidson is out with a “new performance option” in the form of a new 131-cubic-inch (2,147cc) engine that has a name that’s a mouthful.

It’s dubbed the Screamin’ Eagle Milwaukee-Eight 131 Crate Engine and is designed as “a bolt-in replacement for 2017-later model Harley-Davidson Touring motorcycles originally equipped with a Milwaukee-Eight Oil-Cooled or Twin-Cooled engine.”

The new engine “produces 131 ft-lb of torque and 121 horsepower at the rear wheel when paired with Screamin’ Eagle Street Cannon mufflers,” Harley-Davidson said in a press release.

The 131 Crate Engine is the most powerful engine Harley-Davidson has ever produced and complies with noise and emission standards in 49 states. The lone state where it won’t be available is California.

Getting the new engine will take some cash. The oil cooled variant is priced at $6,195, while the Twin-Cooled version is priced at $6,395. Here’s more from the press release:

“Each Screamin’ Eagle 131 engine is detailed with 131 Stage IV badging on the cylinder heads and timer cover. The engine is available in a choice of two finish treatments to match original motorcycle styling or a custom direction – Black and Chrome or Black and Gloss Black. There are also versions of the engine to fit motorcycles originally equipped with an oil-cooled Milwaukee-Eight engine and those equipped with the Twin-Cooled™ Milwaukee-Eight engine.

“The Screamin’ Eagle 131 engine is eligible for Custom Coverage under the motorcycle’s factory 24-month vehicle limited warranty when dealer-installed by an authorized H-D Dealer within 60 days of vehicle purchase, and is otherwise backed by a 12-month limited warranty.

“Installation may require the separate purchase of additional components, depending on motorcycle model. All models require additional purchase of ECM recalibration with Screamin’ Eagle Pro Street Tuner for proper installation.”

Since 2010, RIDE-CT & RIDE-NewEngland has been reporting about motorcycling in New England and portions of New York.
Previous Bronx Native Finds Home For Fixing Bikes In Florida
Next The Week In Review – Jan. 25