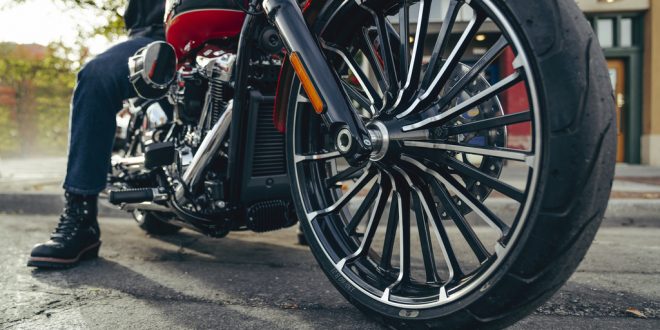 MILWAUKEE – Harley-Davidson always makes a big deal out of significant anniversaries and this year is no different. Having been founded in 1903, the company is celebrating its 120th anniversary in 2023 with several limited-edition models as well as other returning and revised models.

Among the models announced today was the return after a three-year hiatus of the Breakout, which was originally conceived as a modern chopper with a blacked out look. The revived Breakout has much more chrome and a larger engine. A 117-cubic-inch, 101 horsepower Milwaukee Eight engine replaces the previously used 107- and 114-cubic-inch motors.

The Breakout has a five-gallon gas tank with low profile console. It has a new polished stainless steel handlebar with riser which is 3/4-inch taller than the previous model. The Breakout has a base MSRP of $20,999 in Vivid Black. Models in Black denim, Atlas Silver and Baja Orange have an MSRP of $21,524.

In the middle-weight category, Harley-Davidson is now offering the 2023 Nightster Special, along with the standard Nightster. The Nightster Special features a pillion seat and foot pegs and new cross-spoke wheels.

Also new for 2023 is the Road Glide 3 trike. It’s the first time Harley-Davidson has applied a Road Glide-style fairing to a trike. The fairing is frame-mounted and provides ample room for an infotainment system, which includes a 6.5-inch touchscreen.

The Road Glide 3 is powered by a 114-cubic-inch Milwaukee Eight engine and claims a “hot rod attitude.” With larger, 18-inch rear wheels (and a 19-inch wheel in front, the model has greater stability and more attitude looks-wise.

To mark its 120th anniversary, Harley-Davidson will offer seven limited edition models, with anywhere from 1,100 to 3,000 examples of each being built.

For full details on Harley-Davidson’s new models, check out the company’s website.

Since 2010, RIDE-CT & RIDE-NewEngland has been reporting about motorcycling in New England and portions of New York.
Previous Another Helmet Bill In Connecticut General Assembly