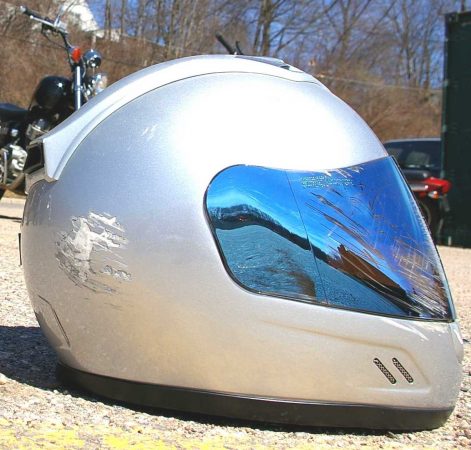 CONCORD, NH – Less than a year after seven motorcyclists died in a horrific accident in the town of Randolph, New Hampshire’s state legislature is considering the enactment of a universal helmet law.

A hearing on House Bill 1621-FN by the House of Representatives’ Transportation Committee is set for 1 p.m. Tuesday at Rep’s Hall.

The bill, introduced on Jan. 8, would require all motorcycle riders as well as operators of electric bicycles, mopeds and bicycles to wear protective headgear. Failure to do so would result in a $50 fine.

Under current New Hampshire law, only those under 18 years old operating a motorcycle or autocycle must wear protective headgear.

Sponsors of the bill are state representatives Skip Cleaver of Nashua, Peter Schmidt of Dover, Jerry Knirk of Freedom, and Catherine Sofikitis, also of Nashua. All are Democrats.

As written, HB 1621-FN states, “No person shall drive or ride upon a motorcycle unless he or she wears protective headgear.” It says, “All protective headgear shall be correctly sized for the driver or rider and shall be equipped with a chin strap.”

It further states, “The operator of a motorcycle shall be responsible for passenger compliance…” and may be fined $50 if the passenger isn’t helmeted. An operator in violation of the law may also be fined $50.

The bill doesn’t provide a definition of “protective headgear.”

Two states that are adjacent to New Hampshire – Massachusetts and Vermont – already require all riders to be helmeted. Massachusetts has had a universal helmet law since 1967; Vermont since 1968.

The other state that borders New Hampshire – Maine – only requires helmets for riders licensed for less than one year and for all passengers under age 18.

HB 1621-FN was introduced seven months after a crash involving a pickup truck with trailer (pictured below) crossed the center line of Gorham Hill Road (Route 2) and collided with a group of riders.

Seven members of the group died and three others received serious injuries in the June 21 crash. The operator of the pickup, Volodymyr Zhukovskyy, faces 23 charges, including seven counts of negligent homicide.

Since 2010, RIDE-CT & RIDE-NewEngland has been reporting about motorcycling in New England and portions of New York.
Previous Sales Decline Again For Harley-Davidson in 2019
Next Billy Joel’s Bikes Are Vandalized On Long Island