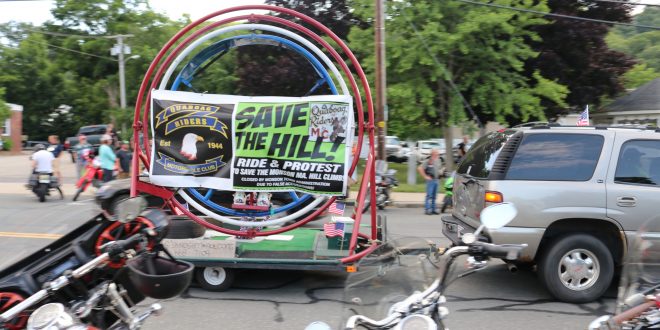 MONSON, MA – Motorcycles and other motorized vehicles will once again be struggling up the “Monson Monster” after the Zoning Board of Appeals on Thursday night overturned two town-issued cease and desist orders forbidding hill climbs staged by the Quaboag Riders Motorcycle Club.

The prohibition on hill climbs, which have been staged at 31 King St. since 1945, was enacted in March. The town alleged that the motorcycle club had violated zoning regulations. However, at the rescheduled hearing, the ZBA voted overwhelming to overturn the cease and desist orders.

The hearing was originally scheduled for June 23 but got postponed when the meeting room at Monson Town Hall couldn’t accommodate the crowd of protesters as required by state open meeting law.

Hill climbs will now resume next month. Quaboag Riders president Bill O’Donnell said a motorcycle hill climb will be staged in late August, while a second event for 4X4s vehicles will be held in October. O’Donnell said he was “very surprised” by the outcome. The board’s votes were lopsided (5-0 in one case and 4-1 in the other) and O’Donnell attributed the result to the support from Monson residents.

More than a dozen supporters spoke during the hearing and were unanimously in favor of the hill climbs. They cited the decades-long tradition of hill climbs, the fact local businesses benefit from them, and the wide exposure they give the town as some of the reasons the events shouldn’t be prohibited. The club normally stages five or six hill climbs a year.

O’Donnell said that “seeing so many people in the town were behind us” helped the club’s cause, and noted “we haven’t done anything wrong.” More than 100 hill climb supporters showed up outside the Memorial Hall meeting site prior to the hearing and nearly as many attended the more than 75 minute meeting.

The cease and desist orders alleged that the club that had altered the hill climb track and its elevation by bringing in dirt from outside and that the club was also in violation of zoning regulations established in 1970 by staging events involving trucks, 4X4s and more.

The club argued that it had only repositioned existing dirt, that none had been brought in, and that hill climbs involving trucks and off highway vehicles had been staged since the 1970s with permits issued by the town. Attorney Frank Fitzgerald, who represented the club, emphasized to the board that hill climbs are “part of the history and culture of the town.”

After the meeting, Fitzgerald said the board “did what the community wanted. The decision(s) reflected a well-thought-out, well-reasoned outcome.”

In the wake of the votes, Zoning Board of Appeals chairman David Beaudoin noted that hill climbs in Monson have “been here longer than I have,” and lamented the fact that in years past the process to resolve conflicts was to sit down, converse and solve problems, not turn to attorneys.

Or, in this case, a hearing.

To outsiders, the entire situation surrounding the hill climb prohibition still appears a bit murky. Monson reportedly doesn’t currently have a zoning enforcement officer. What apparently happened is that a couple of the club’s neighbors made complaints about the hill climbs and the Board of Selectmen, acting in a zoning capacity, shut down the hill.

During the course of the hearing, Fitzgerald said the Quaboag Riders would accede to one element in one of the cease and desist orders and would no longer stage “Go Topless Day” events devoted to Jeeps.

Bud Wilkinson writes the "RIDE-CT" motorcycle column and the "My Ride" classic car feature in the "Republican-American" newspaper in Waterbury, CT. A graduate of Vermont Academy, he received a B.A. degree journalism from Ohio Wesleyan University in 1975. He is the recipient of a Scripps Howard Foundation National Journalism Award in 1992 and a 1991-92 regional Emmy Award for commentary. He currently rides a 1987 BMW R 80 RT and a 2014 Triumph Bonneville and drives a 2010 Mazda MX-5 Miata and 2008 Ford Ranger pickup.
@https://twitter.com/ridect
Previous Quaboag Riders M/C Seeks To Minimize Crowd At Zoning Hearing On Hillclimbs
Next Ural To Commence Shipping New Models From New Factory In Kazahkstan Within Days