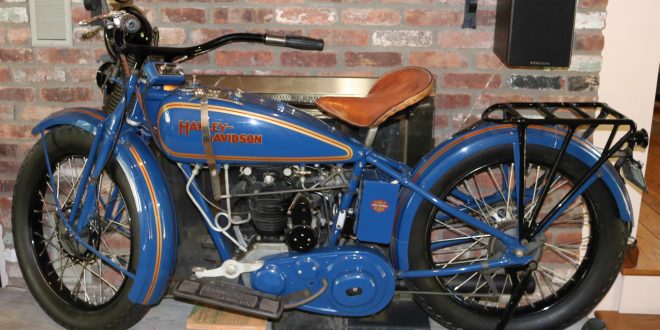 OXFORD, CT – It sits in front of a fireplace in the living room of Willard Revaz’s home. “I used to have it in the basement. I have a walkout basement and I had it covered down there. Of course it collected a lot of cement dust from the basement,” he said.

One day, though, it dawned on him to bring it upstairs and put it on display. “My wife (Barbara) actually helped me bring it up and set it on the fireplace,” he said.

The “it” is a beautifully restored, single-cylinder 1928 Harley-Davidson BA motorcycle that once belonged to his mother, Anna Revaz. He even has a registration from 1938 to prove it.

“She got it in 1936 or ’37. She rode with my father quite a bit. My father was a Harley dealer in Torrington,” Revaz reported. At least he sold Harley-Davidsons for a short while; “1936 and ’37 but during the Depression he didn’t make out very well. He became an electrician.”

Revaz’s father, who was also named Willard, rode the BA as well. He also loaned it out so buddies could ride. “Before I had it restored, it was running and it will run right now. It runs very well,” said Revaz, who had it restored in Vermont some 10 to 15 years ago, a process that took three years.

An award-winning print and broadcast journalist, Bud Wilkinson writes the "RIDE-CT" motorcycle column and the "My Ride" vintage car feature for the "Republican-American" newspaper in Waterbury, CT. He studied journalism at Ohio Wesleyan University where he received a B.A. degree. He currently rides a 1987 BMW R 80 RT and a 2014 Triumph Bonneville.
Previous More Mania: Not In Middletown But New Haven
Next Remarkable Bikes At Greenwich Concours d’Elegance