August 29, 2011 Comments Off on Hurricane Irene Saps Attention Away From Riding

I chuckled at the Facebook post late yesterday afternoon by a friend who wondered whether it might be time for a ride as Hurricane Irene had cleared the state. Love her attitude. She wisely acknowledged, though, that the roads were likely to be too littered with debris to make riding safe.

It has been a wild three days, starting with hurricane preparations on Saturday, the storm on Sunday and clean-up today. The No. 1 priority in the RIDE-CT garage was to make sure the generator was working and fully gassed, followed by finding a way to shoehorn in three bikes, a snow blower, leaf blower, lawn tractor and a pick-up truck. Managed to do it, except for the rear two feet of the truck.

No good personal storm stories or anecdotes to share as many hours on Sunday were devoted to joining other members of the Harwinton Volunteer Fire Department, along members of the Harwinton Westside Volunteer Fire Department and the Harwinton Ambulance, in helping townsfolk in need. Many towns in Connecticut suffered worse than Harwinton, and many first responders had longer, more difficult days, but residents can be proud of the job done. Here’s one picture taken on Locust Road of what happens when 10 inches of rain falls in less than 12 hours. 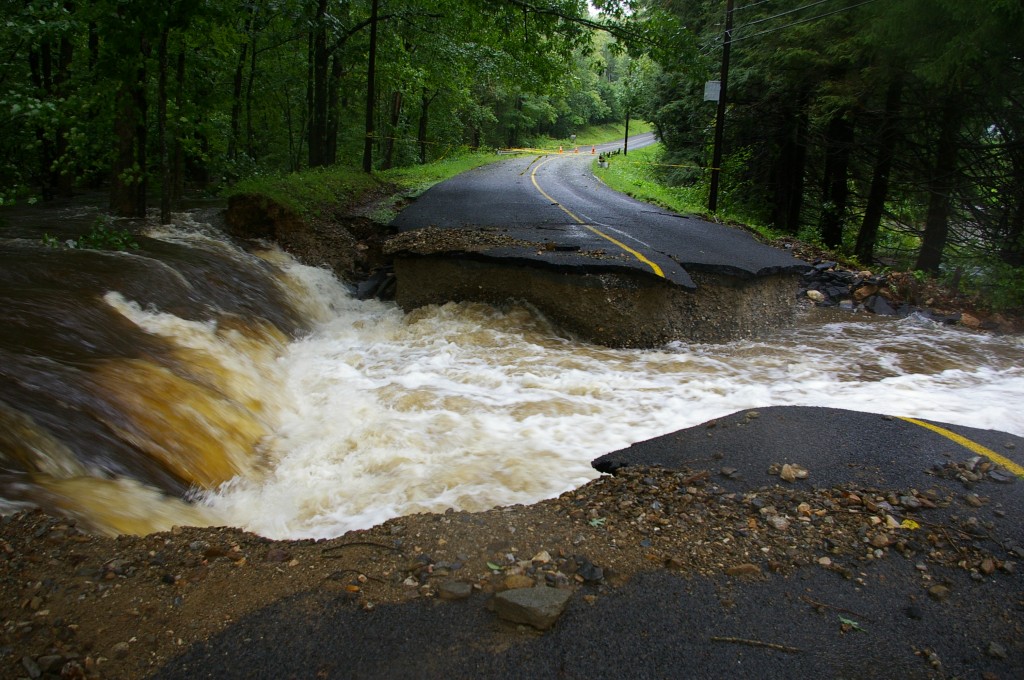 The Hurricane Weekend wasn’t without some contact with motorcycles. Went to Roxbury on Saturday morning to look at a 1974 Honda CB750 Four, but that tale can hold for another day. Internet service in the home office has been out since the storm. No idea when it will return. Regular postings will resume when it does.

Since 2010, RIDE-CT & RIDE-NewEngland has been reporting about motorcycling in New England and portions of New York.
Previous Is “Hurricane Sale” Cute Or Bad Taste?
Next Tales From 2011 Brit Jam