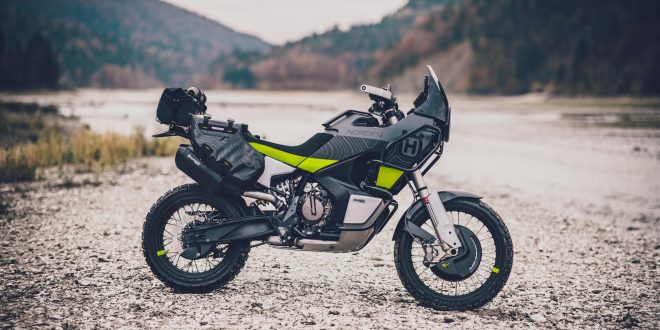 December 3, 2019 Comments Off on Husqvarna Enters Adventure Market With Norden 901

MATTIGHOFEN, AUSTRIA – Husqvarna today confirmed that it will upsize its street line of motorcycles and enter the adventure touring market with the Norden 901 model.

A concept version of the Norden 901 was displayed at the EICMA show in Milan, Italy in early November, making today’s announcement no surprise.

The Norden 901 will be powered by an 889.5-cc parallel twin engine “specifically tuned for adventure usage,” the company said in a press release.

While no indication was given as to when a production version of the Norden 901 might reach dealers or what the MSRP might be, the company said the new model “underlines Husqvarna Motorcycles’ growing commitment to the street segment.”

Husqvarna reported the model was designed for street and off-road use and will offer “class-leading lightness and power delivery.”

An award-winning print and broadcast journalist, Bud Wilkinson writes the "RIDE-CT" motorcycle column and the "My Ride" vintage car feature for the "Republican-American" newspaper in Waterbury, CT. He studied journalism at Ohio Wesleyan University where he received a B.A. degree. He currently rides a 1987 BMW R 80 RT and a 2014 Triumph Bonneville.
Previous Owner Takes First Ride On LiveWire (with video)
Next Triumph’s Small Tiger Gets Bigger, Lighter For 2020