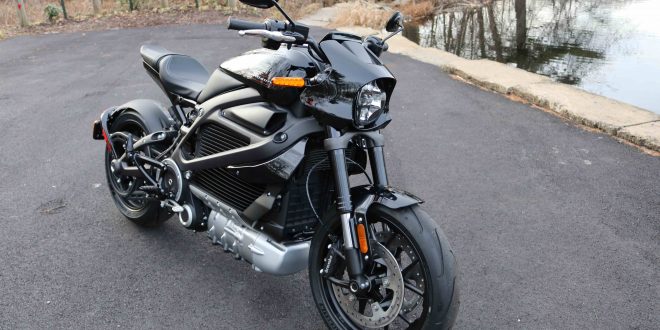 BRISTOL, CT – After more than 10 months of anxiously waiting for his new 2020 model-year motorcycle to be delivered, John Birden of Harwinton finally picked it up on Nov. 23 at Yankee Harley-Davidson in Bristol, CT.

Birden traded in a barely used 2019 Harley-Davidson Softail Slim with only about one thousand miles on the odometer for his new bike, and immediately stepped from motorcycling’s past into the future. He purchased a LiveWire, the company’s debut electric model.

Birden’s sporty Livewire, which has a starting price of $29,799, was the first one delivered in New England. It’s rated at 105 horsepower and can go from 0 to 60 miles per hour in a mere three seconds. It has a touted range of 146 miles in the city and 95 miles city/highway, depending on the ride mode and the operator’s throttle hand.

Having placed his order in mid-January, Birden had to wait for LiveWire to go into production at Harley-Davidson’s factory in York, Penn. In the interim, he went to company headquarters in Milwaukee in August and got to ride a pre-production LiveWire around the city streets.

“The performance is outstanding, the handling. I knew going in being that it was a Harley-Davidson that it was going to be a good bike without a doubt, but it’s actually a nicer bike than I really expected, especially for being a first-year production bike,” Birden said.

The LiveWire certainly has a more sporty profile than Harley-Davidson’s traditional gas-powered cruisers. “I’ve had sport bikes in the past and I love sport bikes. That’s why when I saw this I said, ‘Yeah, I’m going to buy it,’” Birden said.

In riding it home, Birden was accompanied by RIDE-CT & RIDE-New England. He took a route that mixed back roads with state roads. He stopped at Bull Pond in Harwinton and gave a first impression of his new possession.

“Awesome. Truly, truly awesome,” he said. “I don’t want to get off. It’s a heck of a ride. It’s total performance. I tried three different modes. You could definitely feel the difference between ‘em all.”  The model has a total of four ride modes that modulate performance – sport, road, range and rain.

Being electric, the Live Wire lacks any exhaust sound. All the rider hears is a futuristic whining whir. “I love it. You get to enjoy the peace and quiet. I’m not a big noise guy,” said Birden. “I used to be but the last few years… maybe because I’m getting older, I guess.”

The LiveWire also lacks a clutch and shifter pedal. The throttle is simply twist and go. “That’s awesome. That’s even better yet. It’s like driving your car,” said Birden.

An award-winning print and broadcast journalist, Bud Wilkinson writes the "RIDE-CT" motorcycle column and the "My Ride" vintage car feature for the "Republican-American" newspaper in Waterbury, CT. He studied journalism at Ohio Wesleyan University where he received a B.A. degree. He currently rides a 1987 BMW R 80 RT and a 2014 Triumph Bonneville.
Previous First Harley-Davidson LiveWire Delivered In New England
Next Husqvarna Enters Adventure Market With Norden 901