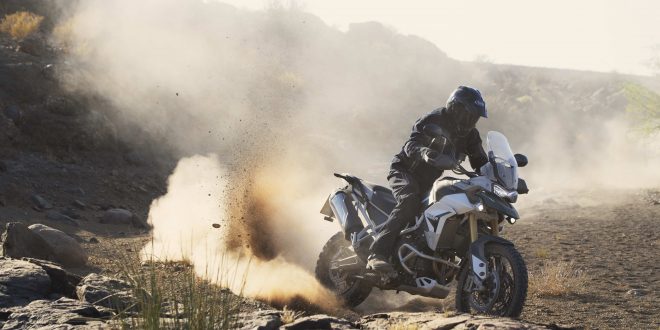 December 3, 2019 Comments Off on Triumph’s Small Tiger Gets Bigger, Lighter For 2020

HINCKLEY, ENGLAND – Triumph‘s middleweight adventure model gets a makeover for 2020, with a larger motor and less weight. The rebranded Tiger 900 line announced today will come in five versions. The models will boast “10% more torque than the Tiger 800” which has been around since 2010.

The Tiger 900 lineup will feature up to six riding modes depending on the model. The base Tiger 900 has only two: rain and road. The Tiger 900 Rally Pro has all six: rain, road, sport, off-road, off-road-pro, and rider-configurable.

All models have ABS and traction control and all but the base model have an IMU (Inertial Measurement Unit) that constantly measures roll, pitch, yaw and acceleration rates.

Seat height on the Tiger 900 models ranges from 31.9 to 32.7 inches on the base and GT models and from 33.5 to 34.3 inches on the Rally versions. There’s a lower conversion kit on the GT variants which can bring the seat height as low as 29.9 inches.

A narrower seat and handlebars that are more than one-third of an inch closer to the rider will provide a more comfortable upright riding position and more rider control.

The Tiger 900 is expected to start arriving at dealers in the spring.

(Photos courtesy of the Triumph)

An award-winning print and broadcast journalist, Bud Wilkinson writes the "RIDE-CT" motorcycle column and the "My Ride" vintage car feature for the "Republican-American" newspaper in Waterbury, CT. He studied journalism at Ohio Wesleyan University where he received a B.A. degree. He currently rides a 1987 BMW R 80 RT and a 2014 Triumph Bonneville.
Previous Husqvarna Enters Adventure Market With Norden 901
Next New Jersey Dealer Plugging Brand Holes At IMS