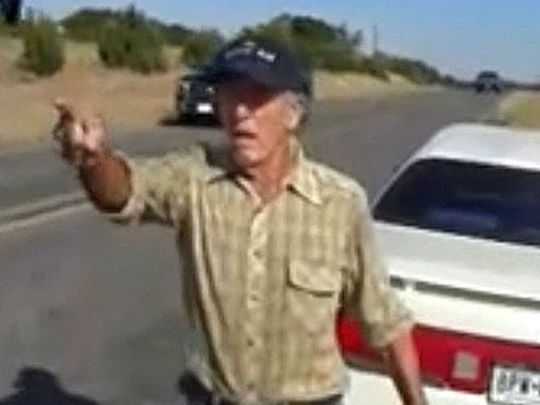 UPDATE: The driver of the white car that forced a motorcyclist and his passenger off the road in Texas on Saturday has been arrested. William Crum, 68, was charged Monday afternoon with two counts of aggravated assault with a deadly weapon.

Police also cited motorcycle operator Eric Sanders for passing in a no passing zone and driving with an invalid license.

WFAA-TV/News 8 reports that Crum claims that an insect bit him near his groin as he was driving, which caused him to jerk the wheel and swerve into the left lane. He said he had absolutely no idea a motorcycle was on his side.

“I can’t do nothing about what happened. It wasn’t automatic,” Crum said. “I didn’t try to hurt anybody. It was a reflex from the pain.”

In less than 48 hours nearly two million people on Facebook have viewed a video of a driver in Texas who seemingly swerved on purpose and hit a motorcyclist who was trying to pass him Saturday. The accident happened in a no-passing zone on a two-lane road. “I don’t care,” the unidentified driver repeatedly says after being confronted by another rider who was following and recorded the incident on video.

The rider, Eric Sanders, was wearing a helmet but no other gear and suffered road rash. Sanders’ girl friend, Debra Simpson, was also wearing a helmet but suffered more serious injuries, including a broken wrist, that required that she be airlifted to a hospital in Fort Worth. She underwent surgery and is scheduled for more surgery on Tuesday.

The video shows the driver taking out Sanders and Simpson at approximately the 1:45 mark and the videographer talking with driver at 2:40.

In case you missed it, the driver claimed, “I got stung by a wasp” in explaining what happened.

In a Facebook post, Sanders admits to passing on a double yellow line. His reason? “Because the fucking asshole that ran me over slowed down to approximately 40 mph in a 60-65 mph zone. On impact i was only going about 60 or 65 miles an hour. I WAS NOT SPEEDING!” he said.

Since 2010, RIDE-CT & RIDE-NewEngland has been reporting about motorcycling in New England and portions of New York.
Previous Indian Monument To Be Dedicated
Next Lime Rock Park Books Bikes