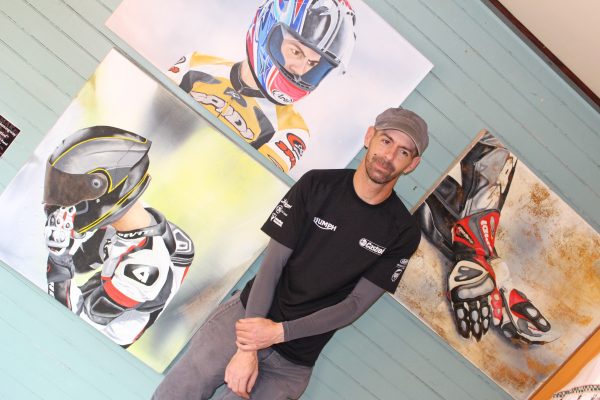 October 24, 2016 Comments Off on Crash Yields Art For Ian Hemingway 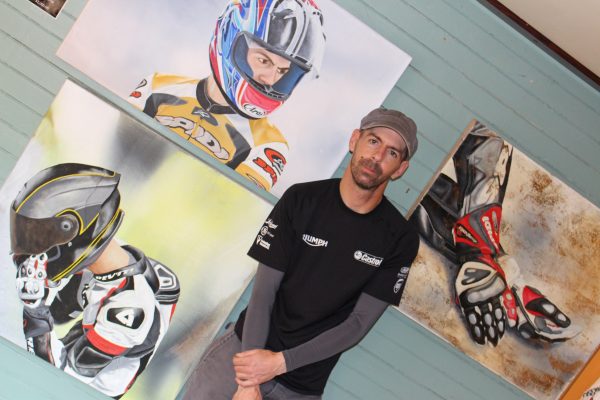 FALLS VILLAGE, CT – The motorcycle-themed paintings, oil on wood, by Ian Hemingway are often self-portraits featuring a solo rider in vibrantly-colored leathers and helmet against more somber, murky backgrounds. They reflect his passion for riding and the catastrophic memory loss he suffered in

a motorcycle crash more than 23 years ago.

Sitting down last week at an outdoor picnic table for an interview prior to a reception (pics below) and showing of his work at Toymakers Cafe in Falls Village, Hemingway issued a warning at the outset. “There are questions I can’t answer. If you ask me pre-1993, it gets complicated,” he said.

Hemingway lives in Valatie, N.Y. and is a frequent visitor at the cafe where his paintings will be on display through the end of October. In addition to painting, he also works at Moto Coffee Machine, an equally popular motorcycle apparel, repair shop and coffee dispensary in downtown Hudson, N.Y.

Learning about his paintings, though, requires knowledge of his past.

It was on the night of Sept. 6, 1993 that Hemingway went out on his 1989 Honda CBR600 Hurricane in Regina, Saskatchewan where he was raised. He was riding on a divided highway with two guys that he’d never ridden with before when one of the other riders “slammed right into the side of me at 80 miles per hour. I cleared my lane and the shoulder; that’s how hard he hit me – airborne,” he said.

Hemingway had turned 22 only three days earlier. Transported by ambulance to the hospital, he was in a coma for 4 1/2 days. The initial diagnosis after an X-ray and CAT scan was a traumatic brain injury, shattered ribs and a collapsed left lung. When he eventually awoke, he was unable to recognize his father or his then-girlfriend. Memories of every incident in his life prior to the crash were gone. “They said, ‘Eat a meal, go home, rest for six months,’” he said.

Hemingway essentially had to start from scratch building knowledge. It wasn’t until March 1994 that his brain started storing memories again. “My re-birth was mimicking what people did,” he said. Providing an example of his memory loss, he added, “I didn’t know what money was. I made every mistake a child makes – a second time. I was impulsive.” 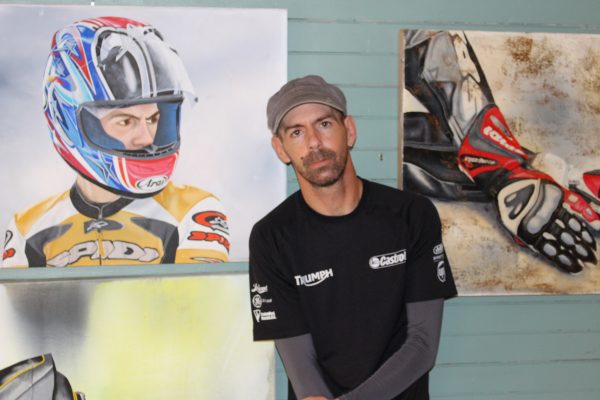 He also had no sense of consequences. Within two weeks of going down, he was back on a motorcycle. How? “I still struggle with that. Muscle memory?”

The effects of the injuries lingered; the impulsiveness and a lack of attention span. He criss-crossed the Rockies more than than 20 times on his motorcycle, and failed in two attempts to go to college. It wasn’t until 1998 that he had a neuropsychological evaluation, the five-year delay exceedingly odd considering that his since deceased father was a behavioral psychologist.

“He didn’t know whether to be my dad or my doctor, and he didn’t do either,” said Hemingway, expressing acceptance for his father’s inaction. The evaluation set him on the road for the remainder of his life. “It made me conscious and aware and it gave me a support network.” 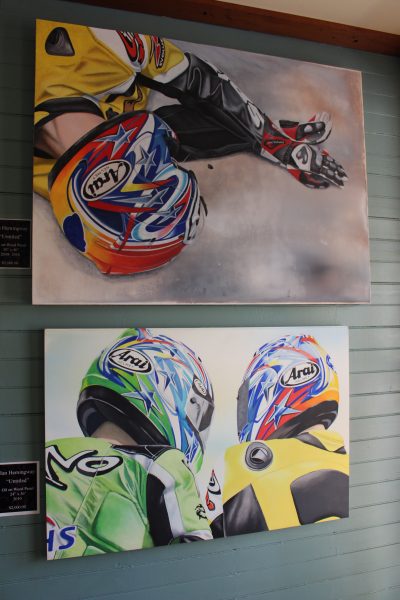 He’d already begun painting, a talent that he had seriously started to tap in high school with an eye on a career. He eventually enrolled in art school and chose to meld motorcycles and his accident in his work. He has produced hundreds of paintings and his work was featured in “New American Paintings” magazine in 2008.

“I’m doing art because I’ve always loved it but I also think I have a story to tell that very few people do. Art comes from personal experience, and that’s the experience that shaped my life,” he said, referring to the crash as the “defining moment that was the best and worst experience of my life.”

Looking at his paintings, the exhilaration of riding can easily be seen. So, too, can the potential for injury and pain, uncertainty and confusion, and his paintings are crafted to represent all solitary riders.

“I do crisp portraits against completely empty space. It’s that fight,” he said. “I’m interested in expressing emotion through body language. All my paintings are faceless, featureless. They are all me but you don’t know that unless you know what gear I wear.”

Hemingway cites two reasons for painting on wood (as well as on steel). One is an homage to art history and the other is necessity. “My hands are screwed up so I lean on my paintings (when applying brush strokes) for support,” he said.

Between 2003 and 2008, Hemingway supported himself solely through painting, but the recession of 2008 forced him to find additional employment. Moto Coffee Machine owner Antony Katz offered him a job that enables him to be close to motorcycles as the store sells used bikes in addition to gear and java.

“I’m lucky to come out as well as I did. The only reason I’m alive is that helmet,” he said, referring to the Arai brand lid that he was wearing. That’s why the brand is featured in some of his works, not because of any promotional endorsement.

Hemingway currently rides a 2011 Triumph Daytona 675. “I still have no memory of my life – birth to 22,” he said. But he has reconnected to his absent past, the result of retrograde amnesia, through motorcycles and art. “I’m a biker. My identity is a motorcycle crash,” he said. 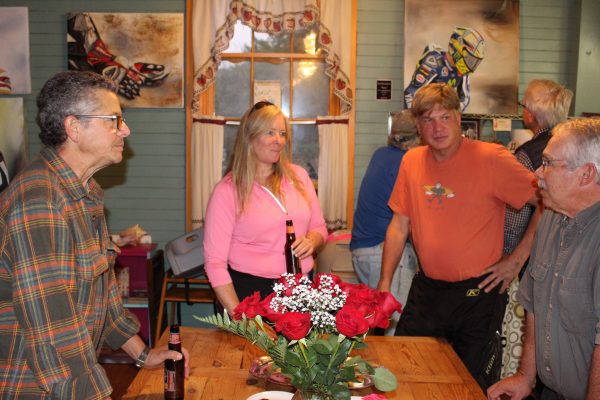 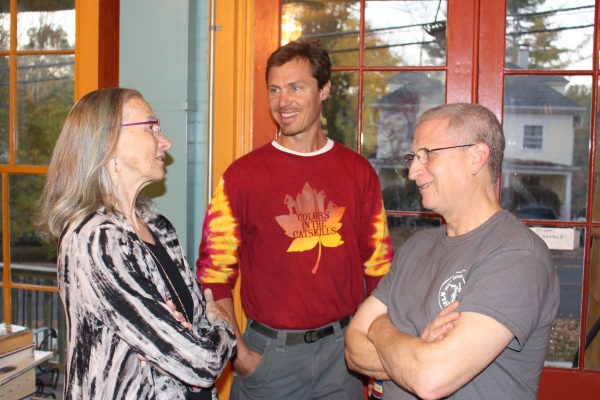 Since 2010, RIDE-CT & RIDE-NewEngland has been reporting about motorcycling in New England and portions of New York.
Previous Kev-Marv Re-brands, Lists Two Shows
Next Star Stories From A Long Career