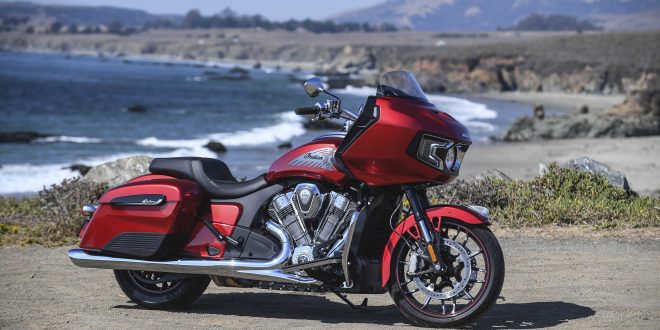 October 29, 2019 Comments Off on Indian Introduces Challenger Line For 2020

The Challenger series will be powered by the recently-announced 108-cubic-inch PowerPlus engine, Indian’s first liquid-cooled large displacement motor. It offers 122 horsepower and 128 foot-pounds of torque, which Indian says is “best-in-class.”

The Challenger models have a six-speed transmission and three riding modes – rain, standard and sport.

“The Indian Challenger delivers a new level of performance for riders who understand that the seemingly small details make a huge difference,” Indian Motorcycle Vice President Reid Wilson in a press release.

“Our mindset was to leave no stone unturned and deliver a bagger that exceeds the standards in categories like power, handling, comfort, and technology.”

Visually, the Challenger targets Harley-Davidson’s Road Glide line and is dominated by a front fairing with a distinctive LED headlight. Even the base model has premium touring amenities such as electronic cruise control, ABS, keyless ignition, weatherproof saddlebags, Brembo brakes and a hydraulically adjustable Fox rear shock.

The Dark Horse and Limited versions of the Challenger will be equipped with Indian Ride Command, the company’s touchscreen infotainment system.

The Challenger models will be assembled at Indian’s production facility in Spirit Lake, IA.

Bud Wilkinson writes the "RIDE-CT" motorcycle column and the "My Ride" classic car feature in the "Republican-American" newspaper in Waterbury, CT. A prep school graduate of Vermont Academy, he received a B.A. degree journalism from Ohio Wesleyan University in 1975. He is the recipient of a Scripps Howard Foundation National Journalism Award in 1992 and a 1991-92 regional Emmy Award for commentary. He currently rides a 1987 BMW R 80 RT and a 2014 Triumph Bonneville.
Previous Hill Country: No Music For Arlo
Next Another Vigilante Video From Ken Kaplan
NEW POLL: Should motorcycle dealers have on-site events where they sell or serve beer or other alcoholic beverages?